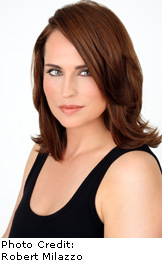 Crystal Chappell and her troupe of daytime drama superstars who are set to make the new online web series, Venice an internet phenomenon, are featured in Michael Fairman’s latest edition of his monthly column Soapside: Advocate’s Guide to Daytime. Jessica Leccia, Gina Tognoni, Nadia Bjorlin, Venice writer/producer Kim Turrisi all sat down with Fairman to give their thoughts, insights and previews of their character and the Venice experience.  Some excerpts are below from the upcoming soap which at its center features a lesbian character (Gina, played by Chappell) and the loves and trials of her life.

Chappell on if Venice will feature real love and sex between women. “She will be kissing and touching a woman, and we shot that at sunset. You get a beautiful sunset and sailboat going by, and there is some good hot stuff there …  might be a push up against a wall … did I just slip that in? [Laughs] But then there is real romance. Gina wants love but she does not know how to commit to it.”

Producing partner Turrisi on the message of the new soap . “I think primarily I want people to realize gay people are like straight people. I never say, ‘This is Crystal Chappell, my straight friend,’ and she never defines me either as her gay friend. I just hope that people out there realize there are gay people everywhere and we are just like everybody else. We have the same feelings, joys, tears, laughter, and we sort of want it to be all-inclusive as one world. … which is how I was brought up all my life. I would sort of like for people to see it like that. It’s one world.” 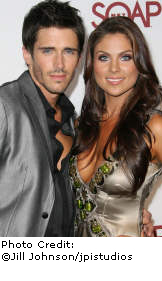 Nadia Bjorlin on how she landed a role on the Chappell series, “It first started because I was stalking her. [Laughs] I thought it was an amazing move on the part of Days. Crystal is just obviously so talented and beautiful and a solid and kind person when you meet her. She has so much going on that she could be a diva, but she is not. So I sort of developed a girl-crush on her.”