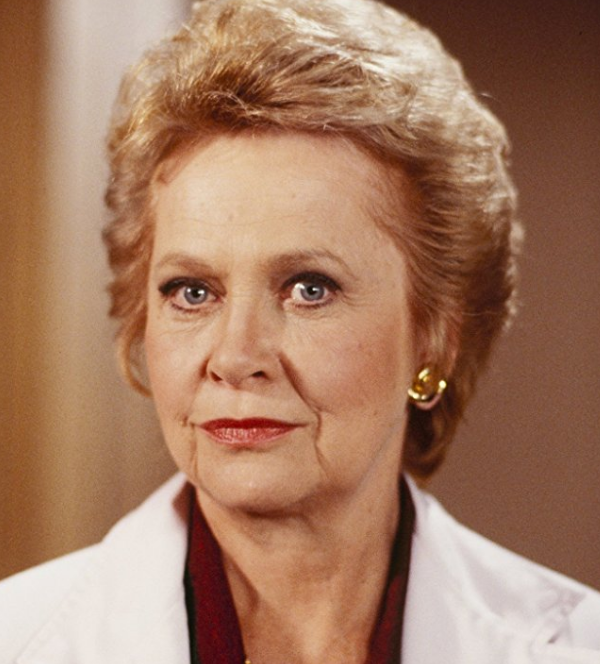 With a career that spanned six decades, soap vet and television and film actress, Georgann Johnson passed away at the age of 91.

Soap fans knew her best from her role as Ellen Grant on the Another World spinoff: Somerset. (1970-1976) Johnson also appeared on Another World in the role, and on As the World Turns as Jane Spencer, as well as parts on All My Children, The Doctors, and Dr. Kildare.

In story on Somerset, Ellen Grant was involved with the much younger Dale Robinson, played by Jameson Parker of Simon & Simon fame.

In primetime, she recurred on Wiseguy, Dr. Quinn, Medicine Woman, Seinfeld Thirtysomething,  and St. Elsewhere to name just a few.  She also had appeared in the classic film, Midnight Cowboy

Johnson is survived by her four daughters: Carol Prager, Annie Prager, Sally Seymour, and Molly Boyll, as well as three grandchildren.  According to her obituary, she passed away on June 4th in Los Angeles.

Do you remember Georgann on Somerset, As The World Turns or any of the other key roles in her enduring career? Comment below.

She was also a regular on Mr Peepers on NBC in the 1950’s Starring Wally Cox, she played Tony Randall’s girlfriend then wife.Loved her as Ellen Grant on Somerset.

I remember her best from “The Trials of Rosie O’Neill” from the early 90’s. She played the snooty, uptight mother (with a secret soft side) of Sharon Gless’ character, Rosie.

They both were terrific but the series only lasted two years.

Me too, Boes! I actually loved her in that role…

I really enjoyed her on “Somerset” and “Another World”. She was always a classy act. RIP.

I watched her on those soaps too…always a fine actress…

I do remember seeing her on a lot of television shows.I am so sorry to hear this,I just lost my mom this past Sat and she was also 91.My condolences there family and may she rest in peace.

I enjoyed her in many, many roles throughout the years. She was a very busy actress. I loved her as Jason Robards’ wife in “The Day After.”

Thank you Ms. Johnson for decades of wonderful entertainment. May you rest in peace.

Oh, how I loved this lady, so many years ago, in all the aforementioned shows. I can still remember her very distinguished voice.R.I.P Georgann, you will be missed.

She had a guest role on Dallas as a doctor who offered her opinion on baby John Ross’presumed genetic condition, neurofibromatosis. She also had a supporting role in the ground breaking movie, “The Day After”, as Jason Robard’s on screen wife.