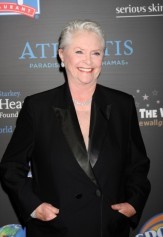 Well, everyone wanted to hear from Susan Flannery (Stephanie) yesterday to find out her thoughts on two things 1) What did she think about capping her legendary career with a Daytime Emmy Nomination for Stephanie’s swan song  on The Bold and the Beautiful? 2) What did she think of her long time co-star, and scene-mate Katherine Kelly Lang (Brooke) finally landing a Daytime Emmy Nomination?

The answers to that came today from TV Guide Magazine’s Michael Logan in a new chat with the four-time Daytime Emmy winner, who is one of the favorites to bring home the gold again this year in the Outstanding Lead Actress in A Drama Series category.  Flannery also discusses her on-screen death, something she had not previously done any press on.   Here are a few excerpts!

Susan on how she found about the Daytime Emmy nod yesterday: “Brad Bell called and said, ‘I’ve tried desperately to wait until 7 a.m. to call you. You’ve been nominated!’ The first thing out of my mouth was: ‘What about Katherine?’ It’s so funny. I was so excited about Katherine, I forgot to ask who else had been nominated in my category.”

Susan on how she and Katherine submitted the same episode which both garnered them a nomination when Stephanie died and what she thought of it:  “I loved it. Toward the end, someone at the show told me Stephanie was going to die in, like, three weeks and I went up to Brad’s office and said, ‘You’re gonna have Brooke there with her at the end, right? He looked up and gave me this great big grin and said, Yes, that’s who it is.’  I said, ‘Fabulous!’ I think it worked out really well.”

Susan on if she will show up at the Daytime Emmys:  “Yes I will be there — just to watch Katherine win!”

What do you think about Susan’s sentiments for Katherine Kelly Lang? Would you like to see Susan and Katherine both win for their heartbreaking final scenes together on B&B?  Let us know!

On General Hospital … Carly and A.J. Have Sex! What is Your Reaction?

I don’t watch Bold and the Beautiful, but she likes a humble class act.

Yes, I would Love to see both ladies win they are the originals and they make the show it is so hard to watch now without Susan I still do for Katherine., I miss Ronn but he needs to do do what life drives him to do. I only hope that now Katherine is finally also recognized for all her hard work in the B&B she deserve it to. Congrats.

that was so nice of Susan Flannery: real words…. I want to be at the Emmy’s to see KKL WIN.

this would be a big surprise… to see this happening… a highlight.

considering… all that GH is not.

I hope KKL wins. She was finally nominated despite there being years when she should have been. It’s tough between Susan and Heather in this category. Maybe we’ll have a tie!

I would like to see Susan win… but not Katherine… sorry.

Susan deserves this Emmy for her incredible last performances!!! Oh boy B&B without her is nothing…I don’t think any other show was so dependent on one character like b&b. Susan made Stephanie truly an unique and unforgettable!!!

Well my sentimental favorite is for Peggy McKay the woman is 85 years old even though I do not watch DOOL my sister does and says her reel was very good. SF has 4 emmys I am sorry I would like to see a lady who has been in the industry this long finally get some recognition. I use to watch it DOOL and I always feel that soap get’s the shaft. Heather Tom won last year I just get tired of the same old same old.