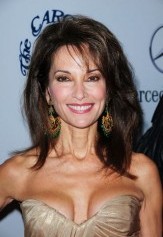 If you missed Monday’s episode of All My Children you had better get on your computers and get to ABC.com and watch it, pronto!  In a emotional, stirring and thought-provoking performance, Susan Lucci showed viewers and soap critics why she is still one of the greatest soap legends of all-time.  In an episode clearly written to showcase Lucci’s strengths,  and a possible episode for use as an Emmy reel for 2011, Lucci’s Erica Kane goes through New Years Eve making sure she pays visits to some very important people in her life, good and bad, and especially her beloved girls, Bianca and Kendall.

What makes the episode all the more touching, is from the opening sequence it is truly about Erica’s love of her late mother, Mona,  and how still to this day, she misses her stern hand and guidance.  As Erica finds it hard to navigate being the glue that holds her family together, she feels he can’t be to her children as Mona was to her.   The episode also took us on a tour of Pine Valley with Erica as our tour guide including stops to David Hayward’s hospital room,  Kendall’s home where she finds her daughter not feeling well,  and then Erica has a meltdown of her own, which looks to the audience as she had taken a swig of champagne and then in frustration, pain, and anger discusses her sobriety and addiction.

Later, as this “momma bear’ announces she would do anything to protect her daughters, it is Caleb played with understated strength by Michael Nouri, who ultimately has figured out what is going on with Erica.  She has been covering up for Kendall since Thanksgiving.  For it was Kendall who shot David, not Erica.    After Erica admits to Caleb he is correct, the two kiss and ring in the New Year!

The writers and Lucci did an excellent job of showing us layers of Erica Kane, and not just the superficial.  Kudos!

You’re spot on with your praise. I think that Monday’s episode was one of the best AMC fans have seen in a very long time. I hope we get more of this quality to come. Lucci gave an inspired performance. It was fantastic.

While I loved Erica’s letter to Mona talking bout her girls AND HER LOVE FOR JACKSON WHICH WAS LEFT OUT HERE, I found the kiss between her and that unbearable mountain bore highly inappropriate, chemistry-less, and barf inducing. MN/SL have NO chemistry and I haven’t bought them or this boring story from day one. It ruined the entire episode for me. I’d rather see Erica and Jack marry and maybe have Erica finally make good on all of her words to her mother.

What a way for AMC to ring in the new year with Susan Lucci front and center–she IS All My Children. One of the best soap episodes I have seen in a long time, and if there is any justice, Susan Lucci will be collecting Emmy #2!

I’ve not watched a complete episode of AMC for some time now. But I heard good things about this one and watched on abc’s site. This was incredible. Lucci was outstanding, and the show moved along at a good clip, while providing those character moments soap viewers crave. I understood how Erica got from point A to point B emotionally, and this was a combination of stellar writing and Lucci’s stellar performance.

I never watched soaps until Michael Nouri joined AMC; now I can’t wait for next episode.
He is really a wonderful, believable actor. I found myself crying when he found out Asher was his son. His performance was so touching, so real. He is wonderful with Susan Lucci; there is an undercurrent of real chemistry there (or if not they sure can make it seem so) and it’s very sexy!!.