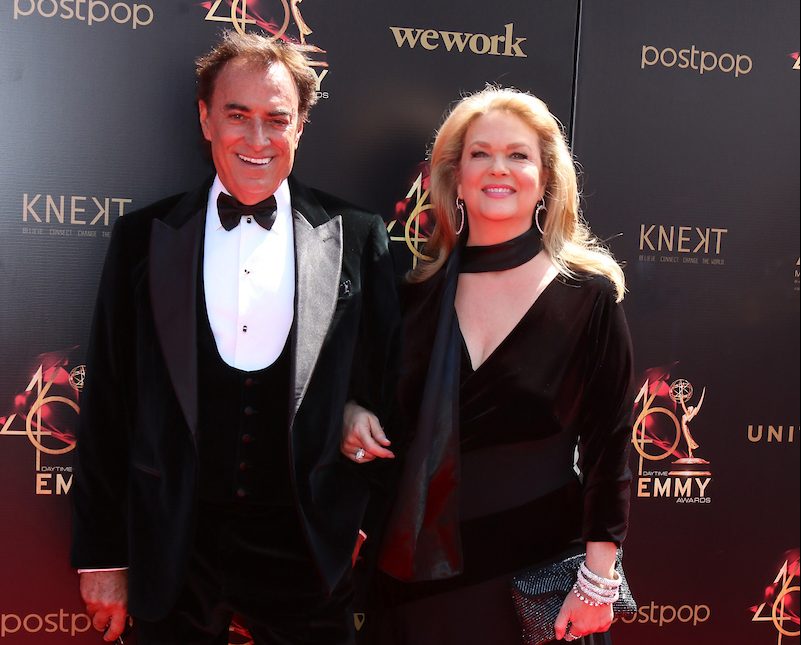 According to his post, Thaao and best friend, Leann Hunley (Anna, DAYS), who attended the ceremony together, are returning to the NBC soap opera.

Penghlis shared: “Thank you all from Leann & myself for your continued support. We had a great time celebrating Days & it’s nominees. You will see us on the screen in July. But is it Tony or Andre?”

Look for the duo to be back this summer on Days of our Lives.

So, what do you think of Thaao and Leann coming back to Salem? Intrigued? What will happen when these two appear on-screen? Comment below.

OWN Releases Full-Length Promo And Key Art For Its New Sudsy Series, AMBITIONS

WATCH THE REPLAY: 46th Annual Daytime Emmy Awards: What Was Your Favorite Moment?

I really hope that it is Tony!!

Most definitely. I love seeing Thaao as Tony. Never really got into his other character Andre.

But Andre was more fun

“God” it was high brow expectation … because you knew they could deliver – bubbly or martini any one – savor the wit the delight of two minds above? Kate AND Andre

I echo what you said, Karen!! Anna Nd Tony!! Forever!!

these two are so dynamic… FUN.. full of character… can swing the gamut on whatever the show needs. high brow with wit … just aplomb and OWN Salem. @Thaao , congrats on your own nomination!!! Anna is CLASS. cannot wait to see you two . OH GOD – they just up the ante and amp adult foray. this just gives us more kate,roman, specifically… two additional dynamo to upper crust … distract Roman , he needs some loving. just saying… OH !!!! @Ron Carlivati…. 2 things 1. even I know there was so much respect, given the talent… Yet even… Read more »

I haven’t said “Rafe’alicious” in a very long time… as Ron Carlivati was spreading the wealth of canvas and tapping in to all his skillset . when scripts PLUS cast are feeding off of each other…. I savor the hour. I am so enjoying Galen Gerring… for obvious REASON… he’s so mind numbingly handsome…. he’s the current day Cary Grant. he effortlessly nuances his delivery with effective mannerisms ALL the nuances … watch his eyes… his facial expressions DRIVE you . I LOVE HOPE… SHE exploded imploded rises to the occasion.. WITH Bo; Aiden; Rafe. Jeezus, who goes their ?!?!… Read more »

Rafe does NEED to move on his own now… no more shortcoming no more propping … I so wish it was with Carrie Brady… even at the top of her game Jordan could work. is Kayla turn? God she needs to have that nurturing TURN. she exudes so much love and care… for this I am so glad that Patch is coming home… I hope without that eye patch. so ranting along because their is so much going on.. yeah i’m not in to the brain tumor thing… so I marquee : spotlight ALL Points Bulletin Galen Gering as Rafe… Read more »

LeAnn Hunley is still a beautiful lady, wow LeAnn is 64 years and still looks good for her age. Days please sign her, to a contract. She is a wonderful actress.

Yes, Claudio…Agreed! LH is gorgeous; and natural…..it’s her face without botox or ‘plastic’ intervention. Love her!!
Aside–I think Haley is Melinda’s daughter, not her sister.
If Trask is an American citizen, wouldn’t that make Haley American? …Hmmmm–if only Trask would come forward, one way or the other.❤️

Oh this is the best news ever! Tho I can’t imagine Rolf saving an impaled Tony I sure would love it to be Tony somehow. Hope it’s not short term!! WOOHOO

I remember Leann coming back last year. She came to Salem and was spending time with Roman. Did she disappear and the story dropped?

Well, both Tony & Andre were seen in the celestial waiting room when Marlena just about checked out from the penicillin overdose. But we did see Andre’s initials on that bizarre warehouse medical facility where Elvis & Jack also were being held.

So I guess I should expect him to escape from Hell yet again? After the first 666 times, I’m used to it.

Days has become like a prime time episodic tv series with stars/characters making guest-like appearances….too many characters too keep long term so i guess seeing some every now and then is better than not at all!!!!

Well that sucks!
I want my GH Cassidine back ! (Thaao Penghlis )

So looking forward to seeing them both again…

I just hope that the writers do justice to both Thaao and Leann.

Greatest news ever! Now I will resume watching “Days.”

Once again, DOOL needs a little boost, albeit having Nicole and Xander back is manna from the gods——the Haley/Melinda story is really intriguing to me. I have suspected for months that Trask was Haley’s mother….mentioned it several times.
I propose Tony as Haley’s grandfather. He has been in China all this time, married Chinese “royalty” …..the marriage produced a son who impregnated Melinda with Haley.
Hmmmm—I wish!!
Sooner or later TPTB must/will introduce Haley’s ‘mystery’ father…..Thrilling!! “Me like” that prospect….

I sure hope that it’s Andre when he comes back!! I love when he is on!!