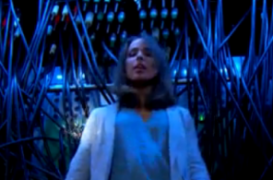 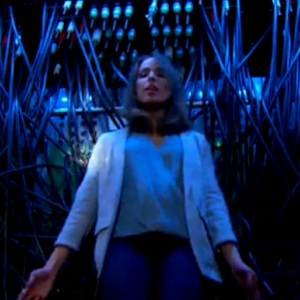 Two young women with a bad history, and getting into a heated argument near some short-circuited wires is not a good thing, particularily on CBS daytime drama The Bold and the Beautiful!

As viewers watched on Friday’s episode, once again Steffy (Jacqueline MacInnes Wood)  is at the epicenter of someone else getting hurt, or in Aly’s  (Ashlyn Pearce) case dying!

As  Steffy and her nemesis Ivy (Ashleigh Brewer) had a war of words over Steffy outing Ivy sleeping with Thomas (Pierson Fode) to Wyatt (Darin Brooks), the gals got near the electrical cables in the Forrester Creations building. And in a swift move, Steffy ends up pushing Ivy to close to the eletrical outlet and she gets electrocted!  Steffy is mortified, or so it seems.  She is now taken down two Forrester women in curious … accidents.

During the pick up of the story on Monday’s episode of B&B, Ivy is in critical condition at the hospital.  All of the men in Ivy’s life are there too: Liam (Scott Clifton)  Wyatt,  and Thomas, as well as Steffy!

After Wyatt delivers a touching speech to a comatose Ivy, Liam and Steffy go out to the hospital corridor where he begins to realize that Steffy may have caused the electrocution!  Will a guilt-ridden Steffy admit it? Will everyone figure out that Steffy has some either serious bad karma going on?

Watch the key scenes Friday’s B&B and Monday’s episode and then weigh-in: What did you think of the electrocution scene?  Do you want Steffy to land in some serious legal trouble? Who do you want Ivy to ultimately end up with: Liam, Wyatt or Thomas?  Comment below!

DAYS Thaao Penghlis Previews: "You Won't Believe What Happens In Jan-Feb. Great Scenes, But Tragedy Is Part Of The DiMera Life."

Umm, continuity police? On today’s #BoldandBeautiful, (following Ivy’s electrocution) Steffy efficiently pulls her cell phone out of her blazer to call for help … which would have been heroic if not for the fact that in the scene prior, Ivy had grabbed Steffy’s cell out of her hand and threw it under the server (where said electrocution took place!!) Am I the only one that caught that blatant misstep?! Does Bell really think we cannot recall that plot point for one scene?!

Yes, I caught that and then thought I was mistaken and it was Ivy’s phone Steffy had pushed away.

No, it was definitely Steffy’s phone: she was ignoring Ivy’s badgering (while she was scrolling on her phone, waiting for Jake to handle their faulty servers), so Ivy grabbed Steffy’s phone to get her attention and she threw it under the servers!! (How Bell could let such a blatant action go unnoticed and then have Steffy miraculously whip-out another cell phone less than two minutes later is a little jarring…)

I guess we were watching different shows because what I saw was after Ivy knocked Steffy’s phone under the board, Steffy when up the stairs to go get her phone which is why they were so close to the board to begin with. As Steffy was picking up her phone, Ivy was behind her and being distracted with action of getting her phone, Steffy just shove Ivy away from her and Ivy went flying into the board.

That’s what I saw as well.

All of the players here are appealing, but I have to confess that I laughed out loud at the electrocution scene. It would make great fodder for The Soup.

The electrocution scene was unexpected and horrible, especially for daytime, if ever. Right up there with the Fluke story. Haven’t watched B&B since, which was on “life support” with me anyway. Ship Steffy out again to Paris, anywhere, never to come back. Could care less who Ivy is with. Never cared for the character anyway. And Liam is such a wimp anyway, Thomas was brought back to be a troublemaker. And on my only positive note, always liked Wyatt.

I TUNED IN YESTERDAY FOR FIRST TIME IN WEEKS…HORRIBLE STORY LINES AND SAME OLD…SAME OLD…….BETTER TO SPEND TIME DOING SOMETHING ELSE…YOU ARE RIGHT ON…

Correction note. Ivy did not sleep with Thomas. They kissed. But, still, the accident was just that, an accident. Stuffy didn’t intend to hurt ivy.

Ivy would be dead most likely.

Don’t like that Steffy is involved in another accident where someone is hurt.

The scene of Ivy being electrocuted was well-done.

Don’t know how anyone being electrocuted can be classified as “well done.”

I agree Mo. I thought Ivy played her part like a real pro. I especially like the story line and where it’s going. Thomas I can do without but a happy couple wouldn’t have a story on a soap.

I thought it was “medium rare”. I didn’t see any smoke coming from the ears, nose or mouth. 😉

Steffy didn’t out Ivy for sleeping with Thomas…which she didn’t…only making out with him.

Steffy needs to STFU and MHOB! Can’t wait until she has her comeuppance!
Ivy needs to grow up and learn how to be loyal and honest with her man.
Thomas is a sleaze and needs to go away.
Wyatt, poor guy, needs to catch a break in a relationship.

I hope Ridge hears about Thomas dallying with Ivy and really calls him on chasing other guys’ girls.

I CAN NOT believe im saying this: bring back HOPE

Hahaha, be careful, your nightmare just might come true! Actually the Hope character isn’t that bad, it’s the writing for the Hope character that’s really sad and pathetic. The actress is talented and well liked but I can only assume she got tired of the same old boring story line; girl gets guy, loses guy, get’s another guy, loses that guy and goes back to the other guy and loses that guy again and again and again.

Correct me if I’m wrong but Ivy & Thomas are cousins and should not be mingling with each other. If Ivy & Steffy are related (cousin’s ) then she & Thomas are as well. What are writers thinking?

I don’t really feel sorry for Wyatt. Remember how he horn dogged and chased Hope down and away from Liam?!?! If it goes around, it comes around.

This Steffy / Ivy story line is beyond ridiculous. First of all, the dime a dozen jewelry designer would be working from home–NOT the CEO. I was so happy to see Ally leave, hopefully Ivy is next.

Re: Ivy and Thomas cousins
Technically Thomas and Steffy having Ridge as their father who’s father is Massimo not Eric Forester.
So yes Bell needs more originality in his story lines than ‘boy get girl or girl likes boy and then ‘sick’ pathology of interactions occur. For example this situation of Steffy, Ivy, Liam, Wyatt, and Thomas (What a hollow character – couldn’t you do better than that Bell).