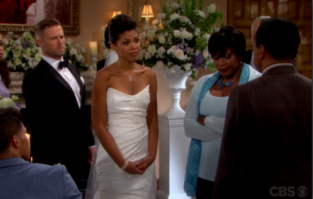 With layered performances abound, and compelling writing, The Bold and the Beautiful’s wedding between Maya Avant  (Karla Mosley) and Rick Forrester (Jacob Young) which began earlier this week has provided the CBS Daytime drama series plenty of material and riveting emotional scenes that may have the word “Emmy” written all over it, when all is said and done.

On Tuesday’s episode, after previously hearing her father call her a “freakshow”, Maya calls Julius (Obba Babatundé) out on his true feelings towards her in a major confrontation that goes down in front of the wedding party.

Julius unable to accept Maya’s transition from being his son Myron, hurls some very hurtful words, even questioning what is wrong with Rick for wanting to marry his daughter!  Later, Vivienne (Anna Marie Horsford) reveals her guilt for turning Maya away as a young child at the orders of her husband.   It was drama at it’s best!

In a interview with GLAAD, Karla Mosley answered the question: “Maya’s story is one of few scripted portrayals of a trans woman dating a non-trans man. Meanwhile, tabloids and gossip blogs continue to shame non-trans men who date trans women. What do you hope the audience takes away from this portrayal?”  Karla responded: “I loved Mia Isabella’s response during the Tyga “scandal.”  She said, ‘If a celebrated man loves a transgender woman, or possibly did, that’s news? It shouldn’t be news – it should be normal for anyone and everyone to love who they choose.’  I don’t think I can say it any better than that. I think we are all being asked to look at the prejudice we might not even know we have and to realize how it might be hurting people, and in the case of many trans people, how our unacknowledged prejudices might be putting their lives in danger. I am hopeful that our storyline and this wave of trans visibility will result in greater acceptance, basic respect for people’s private lives and empathy across the board.

Watch the wedding showdown between Maya and Julius below and when Maya first overhears the heartbreaking truth of what her father really thinks of her.  Then, weigh in:  What did you think of the performances of Obba Babatundé, Anna Marie Horsford and Karla Mosley in the key scenes?  What have you thought of the writing of this groundbreaking story for American daytime storytelling?  Share your thoughts in the comment section below!

Maya is not her daddy ‘s Dreamgirl. Great story snd acting and it is brand new!

I really enjoyed the episode(s). I thought Karla Mosley, Anna Marie Horsford & Obba Babatunde were exceptional. You could certainly feel the pain on all sides of this story.

I have been very impressed with the acting of Maya/Karla and Rick/Jacob throughout this storyline, but WOW to Julius/Obba and Vivienne/Anne Marie, especially at the wedding.

The portrayals were superb! Obba, Anna , and Karla were dynamic!

Had my doubts about this story line but am enjoying it so much more than than the rest of the endless repetitive goings on. Watching the Maya-Rick story is like seeing a different B&B. I only hope after the wedding chapter, the couple is dropped, lost, broken up. It is refreshing not to have the mopey dopey triangles and quadrangles among near relatives (or parent and child!). Mosley is knocking it out of the park, and I love Babatunde and Horsford as her parents.

Sounds like more poor me Maya and I deserve the best! Sickening considering both Maya and Rick are self centred bullies lacking any conscience whatsoever.

I find them unwatchable and now have turned off B&B because the stories have become unpalatable and the characters currently are ALL LACKING! There is no one left to root for.