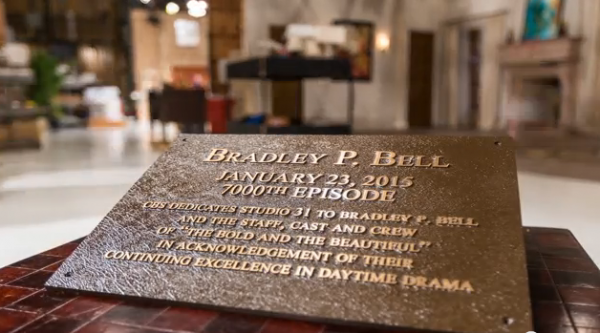 In anticipation of their 7000th episode milestone, the creative team at CBS The Bold and the Beautiful has created a stellar time-lapse video of setting up production to make an episode of B&B come to life each day on the newly dedicated Bradley P. Bell Stage 31 at CBS!

From mounting the sets, to moving the cameras into place, and all the behind the scenes personnel who make the scenery in which the Forresters, Logans, and Spencer families come to life and enact in every day, this video is a celebration of the achievements of the series as it gets set to air its 7000 episode on January 23, 2015!

This week as we previously reported was the dedication of the Brad Bell studio, as you will see the plaque in his name in the video.  Make sure to join in the conversation on social media throughout the coming days by using #Bold7000 and/or #BoldandBeautiful

Watch the time-lapse after the jump, and then share your congratulations to Brad and the  crew for a a job well done!

THE TALK Bests THE VIEW For The First Time In Total Viewers!

That was fascinating..
Goes to show; soaps are very expensive to produce, very expensive..
Many crews to pay and the sets alone are extreme dollars..
For daytime TV the soaps go through millions..

I have never watched B&B but have tuned in for a look-see, and I dunno but the characters all seems so phony ..
For the fans of B&B– long live your soap!!!

OMG….do they have to do set up everyday like that?
Kudos to the crews and all the behind the scene hard workers.B&B ….has the most beautiful scenic and best stage designs of all the soaps.

Seems a bit tacky and pretentious to name a studio after a sitting Executive Producer. Just sayin’…..

Awesome video–thanks for posting. Would love to see something like this for GH.

Fascinating!
How long did all that actually take?
They don’t have to do that every day, do they?
Maybe only after another production has used their studio for a while.
Anyone know?

Wow, great video. Soap fans are lucky any of these shows are still being produced, the cost must be exhorbinant.

A soap has a great many sets the crew is awesome to get them up and going in a very little time..
One thing they never build-
a kitchen ..
Most all families and friends sit in the kitchen with coffee and the deep conversations, it is in the kitchen where the action in a home takes place..
But- soaps have no ”real’ kitchens..
I always found that to be weird ..

B&B has a kitchen at the Forester manse. There have been quite a few scenes in the kitchen. On Y&R, Avery has a kitchen and it was featured prominently (too prominently) in a recent storyline. We’ve also seen Jen’s kitchen on Days. So I don’t know what this is about no kitchens on daytime.

What a beautiful video. B & B have the best & most beautiful scene’s compared to any of the other soap’s. Even the outdoor scene’s are breath taking. This is my favorite soap.