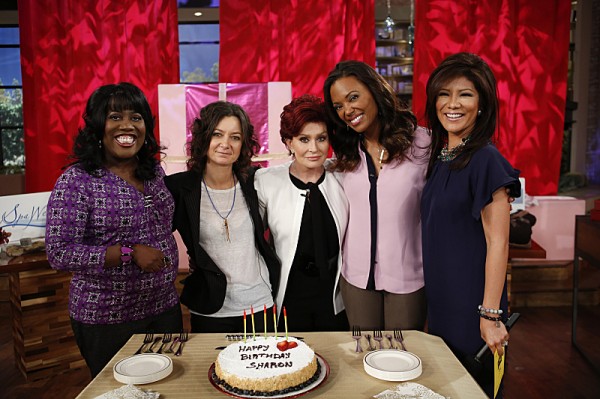 CBS Daytime‘s The Talk outdrew ABC’s morning gabfest The View for the first time in the history of the afternoon series!

Amidst the changing and pending landscape of the co-host chairs of ABC’s long running series, the five-year-old CBS talk show edged ahead in total viewers, 2.95 million to 2.88 million, according to Nielsen estimates for the week of January 5th through January 9th making its the largest audience for The Talk  since February 2013!

The Talk, moderated by Julie Chen with co-hosts, Sharon Osbourne, Aisha Tyler, Sara Gilbert and Sheryl Underwood had previously beaten The View in demos, but this is the first time its original episodes have been more popular overall.  Last week, the shows tied in both women 18-49 (0.7 rating) and women 25-54 (1.0)

Clearly The Talk, with its take on the pop culture news of the day, topical guests, entertaining segments and host banter that clicks and is fun, irreverent, and at times poignant, is becoming the must-see talk series in the day-part.

So, which do you think is the better talker, The View or The Talk?  Comment below!

The Bold and The Beautiful Shows A Day In The Life Of Production On The Bradley P. Bell Stage 31 Studio!

I don’t watch either show, but I’m not surprised. The few times I’ve caught a bit of The Talk, it was far and away better than the shrieking loons on The View. The View is like nails on a chalkboard to me. I love news and current events, just not in that format or with those hosts. Time for The View to go!

The Talk is much better. I cannot watch The View because I cannot connect with the hosts. They seem to have fun on The Talk unlike The View.

The TALK is a cheap imitation. I have no interest in anything the women of that show have to say since none of them are very accomplished. The VIEW is making adjustments that are taking a little time to get just right.

Julie Chen is a news anchor and producer at CBS. She has been in the business for a long time and has very impressive “credentials.” Sara Gilbert is an actress and also a producer. Sharon, Aisha and Cheryl have all been in the entertainment business for quite a while…and together they make a very lively, non confrontational, non political, non racist panel…all unlike The View.

I much prefer The Talk to The View – far less ego.

Well-deserved. The Talk has really grown on me. It’s a lighter, much more pleasant show than The View. Honestly, The View has run it’s course and has become unwatchable, IMO.

I love Whoopi, but her other hosts are not as engaging as the Talk. I really like it better. They all seem genuine and respectful of each other.

I still miss ATWT. One of my favourites, and no amount of daytime love this show has for the genre can replace it.

They should have left Bill Geddie in charge. This is not a hard news show. The segments are terrible. The big guest stars are sitting with one or two of the hosts unlike before where they were all sitting there. They had a couch that looked more comfortable than the stools. They spend too much time on what used to be “hot topics”. I’m betting 2 of the 4 are gone by the end of the season.

I watch The Talk, but only when there’s a guest that I like, about once a month including this week with Patrick Stewart. Everytime I watch, I do like the show and don’t feel at the end like I wasted my time or with disgust like when I infrequently watch The View.

They are both horrible. I just do not understand why anyone with a brain watches them. What a waste of air time!

I’ve never watched the talk in retaliation for cancelling ATWT.

That’s so funny, Shelly.
I do not watch THE TALK because of one phony Brit. She is not who she presents herself to be on screen. Think back, people. She had a reality show a few years ago. I was very young, but I remember it clearly. Trashy, foul-mouthed and crass, that’s what stayed with me….and, the show put the family on the map. This bunch has suddenly become pious. Ha! Now, we are to believe that a London urchin has ‘bought’ some class? ‘N’uff said’.

I’ve watched The Talk since it premiered, manly because of Sara Gilbert. I’ve watched the View off & on for many years. IMO they are different shows even though at a glance, they have a very similar look. I still miss the days when Meredith Vieira was on The View, but it remained somewhat relevant up until a couple of years ago. It is a mess right now. I DVR both shows, but rarely watch more than the first 20 minutes of either anymore. I still find Sara Gilbert’s self deprecating attitude amusing and I appreciate her honesty. At the… Read more »

The ladies on the View are really annoying.