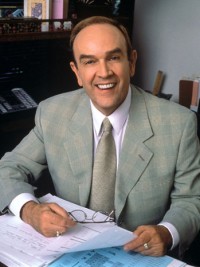 Ron Weaver, a three-time Daytime Emmy Award-winning producer who worked on CBS’ The Bold and the Beautiful for almost three decades, died Thursday at his home in Los Angeles. He was 75.  Weaver joined The Bold and the Beautiful as associate producer in 1986 and was instrumental in launching the daytime soap with its co-creators, the late William J. Bell and his wife, Lee Phillip Bell.

Weaver rose through the ranks to senior producer, overseeing the day-to-day operations of the series, and then became vice president of BBL Distribution, Inc., where he supervised international sales, operations and promotion. After 27 years, he left the show in April after sharing three Emmys for Outstanding Drama Series.

Before The Bold and the Beautiful, Weaver served as director of operations and production services for Children’s Television Workshop, where he was part of the original production team that created Sesame Street, The Electric Company, 3-2-1 Contact, Feeling Good and The Best of Families. During his 13 years at CTW, Weaver was instrumental in the launch of international co-productions of Sesame Street in Latin America.

Earlier, Weaver was a producer and writer at WCBS-TV’s Eye on New York.  Weaver was an active member of the Writers Guild of America for more than 20 years. In 2010, he published his first novel, Soul Mate.

Weaver was born on June 9, 1937, in Mishawaka, Ind. While attending high school in Dewagiac, Mich., he worked as a ventriloquist, performing on local radio and television. He went on to Michigan State University, where he played clarinet in the school band and graduated with a bachelor of arts degree in theater arts.

READ MORE
Jack Wagner On 'When Calls the Heart' Renewal By Hallmark Channel: "WoooHooo Season 8 Thanks to All of You!"

After serving for two years in the U.S. Air Force Reserve, Weaver moved to New York to pursue acting and studied under the renowned Lee Strasberg. He lived there for 20 years, working as a photographer and actor, before beginning his career in TV production. He settled in Los Angeles in 1983.

A private funeral service will be held in Encino. In lieu of flowers, the family requests that donations be made to the Three Rivers Lions Club (P.O. Box 134, Three Rivers, MI 49093) or AIDS Project Los Angeles.

Y&R's Jess Walton Interview: The Passing of Jeanne Cooper, Their Final Scenes & The Loss of a Friend!

So sad to hear of this man’s passing. I am certain he was loved and respected as much as Jeanne was in his own circles. It often an unfair fact of life that those in front of the camera get more attention than those who work behind the scenes. It sounds like he made a great contribution to daytime television. My thoughts and prayers are with his family. And as fan of both Sesame Street and Bold and Beautiful in its day– thank you Ron– rest in peace.

READ MORE
Jack Wagner On 'When Calls the Heart' Renewal By Hallmark Channel: "WoooHooo Season 8 Thanks to All of You!"
Continue Reading

If you caught the finale of The Masked Singer this week, you know that “The Turtle” was revealed to be none other than former All My Children star and recording artist, Jesse McCartney.

While McCartney came in as the runner-up, losing out to Kandi Burress, he spoke to Digital Journal about his latest single, “Friends’ and recalled his time working with the one and only David Canary (Ex-Stuart/Adam) on the now defunct ABC daytime drama series.

As a young JR Chandler from 1998-2001, that put him sharing on-screen time with Canary, who played his father.  Jesse remembers all of the lines of dialogue thrown at him at a young age was not fun.

When speaking of his time with Canary, McCartney shared: “He was one of the sweetest guys on the planet and he was such a kind soul. He played my father, Adam Chandler, and not only was he the star of the show but he played his own twin brother, Stuart. He had double the lines of any character on the show, and in my three years on the show, he never messed up a line even once. There was a time when David helped me when I was having a moment and I struggled with remembering my lines, so as a result, the soap world for me is very sentimental.”

So, do you remember when Jesse and David were in Pine Valley together? Share your memories via the comment section below.