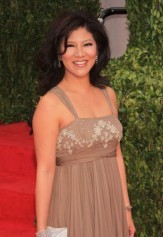 In an article out in MediaWeek, the new mommie gabfest, The Talk (premiering Oct 18th) is looking to create it’s own identify to seperate itself from the  pack of any other female oriented daytime talk shows, a la The View.

The Talk’s, EP Brad Bessey stated, “I want this show to empower women. I want this to be a host-driven show, where guests and the audience can have open and honest conversations with the show’s co-hosts.”  Actress,  Sara Gilbert ( who came up with the concept), Julie Chen, Holly Robinson Peete, Sharon Osbourne, Leah Remini and Marissa Jaret Winokur will be the leading ladies of the show and the format.

Bessey went on to say, “I want to shape television around these women; I don’t want to have television shape them. We’re going to have 200 live audience members each day, and the set is very close to the audience. We’re going to talk to both the studio audience and to viewers at home via Twitter, Facebook and the Internet. We want to have interaction and live feedback.”

According to the article, the program’s guests will come from all walks of life, and both female and male perspectives will be explored. However, the core audience target is mothers, with all the show’s co-hosts having children of their own ranging in age from  infant to adult.

The Talk will air live from Los Angeles at 11 a.m. each day and fill the live East Coast 2 p.m. time period previously occupied by canceled soap opera As the World Turns. It will be televised via tape at 2 p.m. in the other time zones.

So any chance you want to see this soap fans?  Will you give it a whirl and check it out?  Or, veto it right off the bat?

Hell will freeze over before I give CBS the itch to replace even more scripted daytime shows, just so Les Moonves can prop his wife even more.

It’s going suck donkey dung. Better prey that this isn’t successful, or the other soaps are done. They are hard at work on destroying Y&R.

I will not watch this show. I watched ATWT for 54 years (and GL for almost as long), my small way of protesting CBS for cancelling those shows. Not that they care, since I’m not their targeted audience age demographic.

I agree….i saw the first day of ATWT and the last day and most in between.I’m missing it more than i can say….and the way it ended for Luke and Reid was heartbreaking.Truthfully, they couldn’t pay me to watch this talk show.No respect was shown to a show that was on for 54 years.So sad!!!

This is on of the worst things ever put on tv. How much more can you manufacture a show. Talk about a big let down…now “The View” looks like a huge winner. CBS….How shitty is your daytime?