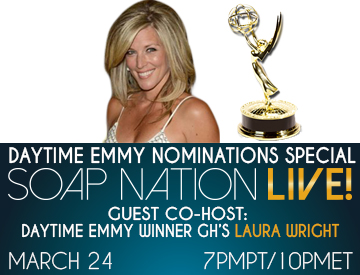 Join Michael and his in-studio co-host: Daytime Emmy winner and General Hospital favorite, Laura Wright (Carly Corinthos) as they chat with several of the just announced daytime drama nominees and get their reactions on the news they received early in the day, when they learned they going for gold come May 1st.  Make sure to be on the lookout on Thursday for our updated show line-up for the night’s broadcast via @michaelfairman on Twitter.

In addition, NATAS’ Senior VP Daytime Emmy Awards, David Michaels, will also be on-hand to fill us in on the Emmy voting process, the upcoming ceremonies, and more.  And, make sure to listen-in for our Daytime Emmy trivia/ game show segment when one lucky caller has the chance to win two VIP tickets to the GH Soap Fantasy Event in Nashville, TN on April 16th which features cast members:  Finola Hughes, Ryan Paevey, Michelle Stafford, Tyler Christopher, and Laura Wright.

To call-in and share your thoughts on the nominations of who got in and who was snubbed and more, or to pose a question or a comment to any of our guests, dial the exclusive listener-line at 877-564-9088.

And, if you want to get a taste of Soap Nation Live with Michael Fairman from our past episodes,  you can listen to the archived broadcasts by going to our episodes page at Spreaker.com

So, which of your daytime soap favorites do you think will get a nomination come Thursday?  Who do you hope will be on our broadcast?  Will you be listening in?  Let us know in the comment section below!

Robert Adamson Now On Recurring Status With The Young and the Restless!