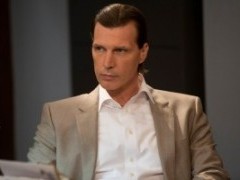 Last week, as previously reported, we learned that three daytime favorites are headed to One Life to Live in all newly created roles to shake things up for the characters on the canvas in Llanview.

Ron Raines, who everyone loved as Alan Spaulding on Guiding Light is going to play a pivotal role as of  Carl Peterson,a distinguished and influential business man, who has been Jeffrey’s long time mentor. But something tell us this could cause some issues with Clint,Viki and Dorian along the line too!

Marnie Schulenberg who fans saw as Alison Stewart on As the World Turns will play TV producer Jo Sullivan, who is working on a new reality show with David Vickers, played by Tuc Watkins.

Now while both Raines and Schulenberg don’t air for a bit, it’s the sexy Paolo Seganti who invade Llanview first!  Seganti, most remembered for his role as Damian Grimaldi on As the World Turns,  is already taping episodes in the his OLTL role of Arturo Bandini  a wealthy man whose family is very influential in the art world.    Seganti first airs on June 27th, and this morning TOLN made available this first look image of Seganti as Arturo!

So what do you think Seganti’s role will have to do with the citizens of Llanview?  Are you looking forward to these arrivals?  Share your thoughts!

Alice Callahan Joins The Cast of One Life to Live as Jack Manning's Summer School Teacher!

(UPDATED)The Young and the Restless Tribute Episode To Jeanne Cooper Airs Today! Watch it And Then Share Your Thoughts!

need a good looking man and some trouble to keep the show interesting!!

I suspect that he will get involved with Blair and Tea via their connection to CIA spy and artist Tomas Delgado.

Im sure Poalo will have some sort of connection to T’homas, and maybe Victors kidnapping? Rons character maybe comes between Viki and Clint or maybe Dorian and David who gets involved with Joy? The show should bring on Tracy Ross as Jeffry mother who reveals David is Jeffrys father.

Next to Don Diamont and Antonio Saboto, Jr. this Maltese hunk was one of the hottest men of the 1990’s.

Now? Not so much.

Was it really necessary to cast him for this new role and not a racial minority actor? They should have made this char a racial minority if he isn’t biologically related to any of the white chars. Former oltl actress tika sumpter’s new soap abt African american chars has high ratings. But of course there’s still seldom any racial diversity on day soaps bec all of day soaps have to be abt core families that are white. Such tolerance and commitment to racial diversity!

PLEASE MR FAIRMAN Take this person off the site!
Your posts are ridiculous! Everything with you is about RACE! OMG Really!!

OLTL has ALWAYS given minorities great storylines…that’s ALL minorities and not just African-American. Are you even watching??? Out of the 10 main actors we see each week 2-4 are minority including African American. Jeez… WATCH THE SHOW AND THEN COME AND COMMENT thanks

I can’t wait to see how and if he has any connection with Tomas!!