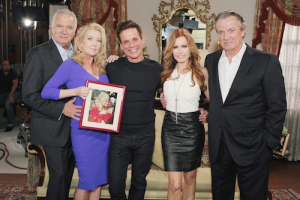 Today’s episode of CBS’s The Young and the Restless (12:30PM-1:30EST, 11:00am-12:00PMPST)  pays tribute to legendary Jeanne Cooper (Katherine Chancellor) in a special episode where series stars and Jeanne’s family member share their remanbrances of Cooper who passed away on May 8th

Cast members and friends of the beloved actress, including Melody Thomas Scott, Christian Le Blanc, Tracey Bregman, Eric Braeden and B&B’s John McCook, as well as family members such as her son, Corbin Bernsen, recently gathered on set to shoot a celebration of the life of their late friend.

As part of the tribute episode, the cast of Y&R will share their favorite memories of working with Cooper, along with personal recollections of their friendships with her. Additionally, interviews with Cooper from the show’s recent 40th anniversary and classic clips of her years on the daytime drama will be included.

UPDATE: To watch the full episode via CBS.com it is now posted there!  Share with us the moments in the episode that touched you the most after you have had the chance to catch this very special moment in soap opera history! Below is an excerpt from the preview clip to promote A Tribute to Jeanne Cooper.

Related Topics:cbsThe Young and the RestlessTribute to Jeanne Cooper
Up Next

TOLN Releases First Look Of Paolo Seganti In His New Role On One Life to Live!

DAYS Chandler Massey Interview: Will Becomes A Dad, His Daytime Emmy Nomination & What's Next for WilSon?

I will miss seeing her on the show it’s really sad what has happen and my thoughts and prayers go out to the whole Y&R staff. I have been blessed to have started my own photo album of the Y&R that I have had since I was a teen. It won’t be the same with out her on the show. Much love from Brighton Tennessee

It was beautifull!! I was worried about how it would be done, but they did a great job. I feel like i know who she was, alot like Mrs. C. They will both be miss.

It was beautifully simple and wonderfully touching. Kudos to whomever found vintage footage of Jeanne with newly the arrived Victor Newman and her first encounter with Lauren Fenmore! (My only complaint is John McCook inferring he was already in place when Jeanne arrived; he actually joined the show 3+ years after Jeanne.) Great job!

it was very well put together!

My only disappointment was that is was not longer- there were obviously some stories being told about her that were cut off that I would have love to heard the whole thing. It would be great if they compile a DVD on all the stories shot that day in their entirety; didn’t mind the edited version, just wanted more. Love the early shots of her, she was gorgeous in her youth, stunning in womanhood, and simply beautiful in her golden years. Rest in peace — we will missed your presence, but your spirit will always be with us.

So well done… a beautiful tribute to such a special lady!!! I loved and wished it could have been 2 hours!!! How fabulous to see her castmasts all thinking they had their own unique and special relationship with Jeanne!!! I wish I had been lucky enough to meet her. She sounds like she really loved and appreciated her fans and that is so lovely. They really had a great mix of her speaking, clips, cast members speaking and finally her kids… very touching and truly a celebration and a tribute to the star of Y&R!!! Jeanne you will be missed…… Read more »

What a wonderful tribute to a great lady. Thank you to CBS for taking the time to acknowledge her contribution to the entertainment world.

What an incredible tribute !!
I watched from Canada on time shift 3x….and cried throughout every time.
It was wonderful to see Jeanne Cooper in flashback scenes.
I started watching Y&R in summer of 1976 as a 13 year old.
I always thought Jeanne Cooper epitomized absolute class and grit.
Katherine Chancellor’s relationship with Jill Abbott was ‘the relationship’.
A real Super Couple.
It was so fitting that her last scenes were with Jill – and the last scene in the tribute was given to Jess Walton.
I hope Katherine Chancellor’s presence will be felt in storyline for years to come.
Rest in peace Jeanne Cooper….well done,well done !!

i cried! it was very touching!

CBS…Thank you so much for this “AWESOME” tribute to Ms. Jeanne Cooper. Have watched the show for many years, like so many others. Icon she was. Others have said it so well. Not much more to say….Ms. Cooper may you now rest. Job well done!!You have left behind so much to so many. Thank you from all of us!! XO

Heart-warming/Heart-breaking. Was not ready to lose this wonderful woman who has been in my life since I was 14 years old. This old world is changing & I am not sure how much I like it.

We were honored to have our song chosen for the photo montage –
https://itunes.apple.com/us/album/thats-when-ill-stop-loving/id655130908
Joel & Byron

Was this not just a beautiful day for this magnificent woman…I’ve watched 3 times now, enjoying all the tweets coming into CBS, it was nothing like daytime has ever seen past or future, a true legend of daytime genre….Great day for daytime!

With all that was said about Stephen Nichols head being cropped from the cast photo, it was very nice to see him included in the tribute. I was also glad to see Tricia Cast included, considering she lives out of state. She was probably in town for the funeral and stayed with Lauralee Bell, but the fact that she was there was really nice.

It seems to me that they really thought about who shared scenes with Jeanne. I thought it was a very lovely tribute to an amazing woman.

Absolutely wonderful. Something I’ll watch more than once. It was indeed a great day for daytime.

Saw some of it and it was heartbreaking to see Jess at the end. I’m going to put it on DVD so I have a copy of it.

It went so fast, but I thought he tried to say “little sh–.”

So very well done. I was surprised at the quality and emotion. Balanced program and such a gift to us as fans. Well done, CBS! This was a real treat for us.

Well done tribute to Jeanne Cooper and her role in making the show what it is!

I think it was touching and beautiful, classy and full of warmth just like her. I have to congratulate TPTB at Y&R, Sony and CBS for getting it and doing it right. Jeanne Cooper deserved this tribute. So often the stars of daytime who pass away get little more than a nod. Taking an entire show and allowing family and cast members to break that fourth wall and share was outstanding! Thank you to all who participated. Those of us on this side of the camera share in your loss.

What can a person say about Jeanne Cooper and the loss of her to this show? It’s hard to sum up in words what it will mean. Here is a woman whom I’ve spent every day of my adult life with: crying, laughing, celebrating…… day in, and day out. I’m 42 and will forever miss seeing that brilliant woman light up my screen…. giving everything she had. God Bless you, Jeanne…… and thank you. Thank you for a a moving tribute, Y&R; especially at the end, with her omni-present tea cup and jewels; perfection…. just like Jeanne.