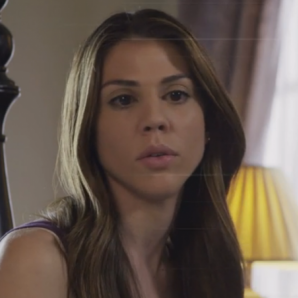 If you want your fix of cray-cray as only former Days of our Lives star Kate Mansi (Ex-Abigail) can bring to the table, then you don’t want to miss tonight’s LMN premiere of Unwanted Guest! The made-for-TV movie airs Saturday at 8EST/7CST.

In it, Mansi stars along with former GH and OLTL favorite Ted King (Ex-Alcazar, GH) and Beth Littleford.

As to the story, when Amy (Mansi) has nowhere to go for winter break, her friend Christine insists she come stay with her family. What begins as a dream situation turns into a nightmare when Amy starts to obsess and wreak havoc on her welcoming hosts!

During On-Air On-Soaps “Farewell Days of our Lives” interview with Kate, she mentioned she has been playing some form of crazy in some projects, even after Abigail had gone down a dark ans twisted road during her last months in Salem.  Kate related about her work post-DAYS: “I did two indie films; one is called Unwanted Guest, and one called The Boyfriend Killer. I am leads in both films, and I play a crazy killer in both. When I left DAYS I was thinking, ‘Oh, I’m going to go do something light. I’m going to take some improv classes.’ Then I went into Fatal Attraction 2 and 3! (Laughs) I have been enjoying auditioning, and getting the opportunity to play other roles, but of course, you miss the security of playing a character you know so well, and know even better than yourself while having a place to show up where you feel respected, and you don’t have to prove yourself. So that part is different. I like to be working, and that is the thing I am learning. Patrick Muldoon (Ex-Austin, DAYS) jokes with me so often: ‘Oh, it’s not like you are going to be type cast, right?’ (Laughs) It’s his favorite joke. He thinks it’s his claim to fame. Patrick will say, “The Austin/Abby story is when you learned to play crazy. So I really take credit for that!” (Laughs) Patrick is in the The Boyfriend Killer, and he was cast first. By the way, not to say that he is not type cast, he is playing a recovering alcoholic father that is the cool dad, and womanizer. So, I will have to throw that back at him! (Laughs)”

Watch a preview from tonight’s premiere featuring Kate in Unwanted Guest below! Then let us know if you will be checking her out in the movie, and if you are missing her on DAYS?  Share your thoughts in the comment section.

Dont get the channel-looks interesting…what i miss on Days is great storytelling…its ok to watch once in awhile but im not a daily watcher anymore but i do hope it turns around and stays on the air!!!

Yes I watched Unwanted Guest starring Kate Mansi. She did pretty well but it just made me miss her more in Dool. Wish she would return to Chad.

I agree, Sandy. Kate really outdid herself as Abbi. She was so perfect in the role, She made the scenes come to life.
And, Billy Flynn is a master at his craft; for one so young. He has been extraordinarily en pointe since day one. This is ONE EMMY WINNER!!!!!! So deserving.

Ahhhhhh…Michael Fairman…I would never have tuned in to the movie for Kate Mansi since I didn’t watch the soap when she was on and I didn’t read this article for the same reason. So imagine my surprise when I I stumbled upon the movie by accident while flipping channels and was surprised to see Ted King…so happy to…haven’t seen him since OLTL. Always loved this actor! I guess I’m surprised that you didn’t mention him along with Kate Mansi in your heading. Sigh…I forgive you… 🙂

I recognized the lead male and couldn’t place him. Ted King! I really liked the movie. I only tuned in for Kate Mansi. I thought she did a great job and I liked the movie. It wasn’t the usually campiness or terrible acting that LMN usually produces.

Hi dmr…well, we agree on Ted King, lol. I loved him as Alcazar on GH and Tea”s husband on OLTL. We disagree on the movie though…yes, the acting was fine. Didn’t have a problem with that. But it was the predictable crazy love-starved sexy chick kill everyone in her way to get to her latest object of affection…formula. And the stupidity (no offense) but the daughter is lying in the bed sicker and sicker and neither her mother nor step-father call the doctor, King’s wife falls and breaks her leg, is in the hospital, yet he’s convinced not to come… Read more »

Ted King…why oh why, lol, would you “star” in this? Did you read the script before you agreed??? It was so beyond bad, so dumb, so frustrating to watch…just stayed with it for King ( whose role was beyond idiotic).

This is obviously an emergency! Ted needs to check in to GH asap. Please???

HAHAHA, after reading your responses, I suppose you may be right! All very good and valid points! For some reason, unlike the other LMN movies, this one kept my interest. Maybe it was Kate Mansi. But, yes, the plot was well, lackluster..

I did see the previews for it so I already knew that was her.Lifetime has a lot of movies with Days stars in them ,for instance I saw Nicole in one, Ben and what is her name Nicole’f friend there ,she was in a movie get this with the guy who played Ben,It was called I know where Lizzie is.No it is not about Lizzie Borden although I wish it was …lol. Even at Christmas I believe Daniel was in a movie called Christmas and Handcuffs that was a really good movie. I wonder if some of these actors actually… Read more »