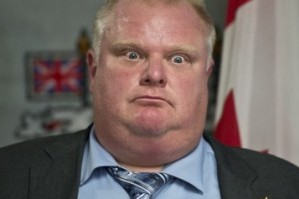 Leave it to General Hospital to once again make some headlines in pop culture and this time it’s by using the name of current pop culture mess  … Toronto, Ontario, Canada’s  own mayor, Rob Ford!  The crack-smoking Ford is running for re-election despite his public admissions of drug and alcohol use and has become quite the butt of many jokes for his off-camera and on-camera antics!

However, on Wednesday’s episode of GH, as picked up by The Hollywood Reporter first,  Nikolas (Tyler Christopher) told Britt Westbourne (Kelly Thiebaud) that two more guests were expected at their big engagement bash, because Elizabeth (Rebecca Herbst) has agreed to come and she’s bringing a date.  To which Britt, who is not too happy with Liz, replies, “Hmm … you don’t say …. Rob Ford?”   To which, Nikolas retorts back, “Someone almost as notorious!”

Rob Ford’s name became a media sensation when the story broke of a smartphone video that allegedly showed the mayor inhaling from a glass pipe.

So what do you think of the dig at Liz by Britt using Rob Ford?  Do you like the way the writing team at GH often has some very clever one-liners?  And the fact that GH gets some additional media attention from it?   Let us know!

Elizabeth Hendrickson Confirms She Is Exiting The Young and the Restless With Message To Her Fans!

As a Torontonian I wish the media would stop giving this buffoon attention ~ he loves it. Next thing
you know he will be a guest star. I hope he doesn’t show up at the party 🙂

Whats scarier, is he will probably take the offer, after all, he gives his contact info to everyone, all they would have to do is ‘we want you to guest role on GH’.. he would likely say yes.. get another ball of upset rolling..

Whats even more odd, is I recently watched the Jimmy Kimmel episode which had Ford as the guest… Im gonna get lambasted, but the way Rob Ford handled it, he seemed almost in control.

Where can I get odds on Rob Ford getting re-elected in October? I wanna put $50 down…

.. and before I forget.. I loved the fact his name showed up.. it goes to show that we dont get forgotten north of the border.

That said.. I love that GH gets some attention out of it.. I had to have my wife listen, to make sure I wasn’t hearing things… (She said, but there’s like hundreds of Rob Fords right? LOL)

I do not live in Toronto, thank god but Rob Ford is known all over Canada and he is s joke, the joke mentioned in the episode on GH was so dam funny, thanks to whomever thought it up.

How was that particular “joke” so damn funny. You could have inserted a dozen different names in there and had the same result. And the result is merely a reference, not even a joke. And leave it to General Hospital? Everyone in the world has made a Rob Ford reference in the last few months, Jimmy Kimmel had him on his show. This is just the ABC PR department trying desperately to get some attention for the show leading up to the Donna Mills stunt. Wouldn’t it be great if they concentrated more on writing a good show instead of… Read more »

Its funny to most, your obviously not up on comedic laughter or jokes, every time he is mentioned in some form its FUNNY, if you do not understand it then thats on you, quit blaming everyone else for you not liking the show, if your not happy let them know or just do not watch, its so simple.

I guess I have soaps on the brain because that reference flew over my head. I thought first and foremost about Ford from One Life to Live! And when I realized that made little to no sense, I forgot all about it. Until now.

Bobby did not go to hell. Mitch was carried to hell by Bobby’s Dad & Stacy. Bobby died a hero!

Thanks Sandra…i shouldve remembered that, especially since i have the episode on tape and watched them 3 times!!!

I must of have missed it because I don’t recall that line at all– but being from Canada my mind could have blocked it out along with what’s his name Justin something? LOL.

well.
I like to be entertained..
So– I would get a real kick outta having Rob Ford as a guest on GH..
I do not take soaps as creed/seriously, so let Rob Ford entertain me Haaaa that would be fun..
But– iIdoubt he will ever be a guest on GH 🙁

but loved the shout out for Canada.

I’m USA, but
Rob Ford is a real one!! He is not a pretender He is what he is and he doesn’t hide it.. Gotta respect him for that/not being a politician player..
I also, read/heard he has done some good things for the people..

Can’t disagree with anything you have stated….and he is running for re-election, but he did deny the “glass pipe” incident right up to the public showing of it…..

I’d love to have Rob Ford do a month on GH as himself..
And mix it up with Dr. O … !!!
ohhhh gawd!! that would be unforgettable!!
and– the ratings would burst the charts!!

Oh he’s real okay. And hard to respect, or be entertained by, if he’s your mayor, or the people who have been associated with him and his brother’s “extracurricular” activities since highschool…some of whom aren’t around anymore. And as for what you’ve read/heard about what he has done for the people, he is after all a “political player” fighting for re-election and in this regard believe “none of what you hear” as the saying goes. And no, he doesn’t hide it…anymore…that’s because he got caught and his “rehab” isn’t working. Sorry to be so serious but you hit a sore… Read more »

Many seem to luv the guy and I’d bet he will be re-elected ..
none, no politician can be believed but Rob is real, as real as any politician can be/ a rare one ….
I would love to see him on GH.. that would be great! LOL 🙂

God bless him, he really is one of life’s characters!!!! I immediately caught the mention and just roared…Mr. Ford has now truly arrived with his mention on GH! Hope he appreciates the shout out…..of course, if he did turn up in Port Charles it would make perfect sense since the city is supposed to be located close to the Canadian border! (Hey, he could have gotten lost and wandered….LOL.) However, to all our friends north of the USA, I sincerely express that we only are laughing with you, not at you….as we certainly have no place to judge with the… Read more »

Good to see GH acknowledge pop culture BECAUSE thats what the real world does EVERYDAY!

I thought it was great that GH can use real life events to their advantage.Plus it gets people talking about GH and maybe more attention to other sort of events that GH might do in the future.