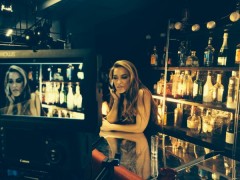 Wanna to know where to look for One Life to Live favorite Trevor St. John (Victor Lord Jr.) in the near future?  Casting news today has that Trevor will be added to the mix of well-known soap actors in the web teen drama, Youthful Daze!

Season 3 of  the award-winning hit teen soap has noted that Daytime Emmy winner Rick Hearst (formerly of General Hospital and Guiding Light) is joining the show in a heavily recurring, mysterious role that will begin airing in early 2015. Chrishell Stause (Jordan, DAYS) is also joining the show in January as Zoey, a spunky and vivacious woman who will come to town with a huge secret.

Rounding out this latest casting coup for the internationally successful, critically acclaimed teen drama are Bryan Craig (Morgan, GH) and St. John, both who are slated to begin appearing in episodes this November!

Youthful Daze is set to release one new episode of Season 3 every Sunday night through Spring of 2015, 41 episodes in total! The series is available exclusively at www.YouthfulDaze.com.

Youthful Daze creator Bryan James said of the casting additions and his show: “It is an exciting time for online scripted content and it is our goal to continue to create content that transcends mediums and ushers in a new era for watching their favorite shows. The cast and the story lines we have assembled for our fans and for fans of serialized soaps should keep viewers on the edge of their seats well into the future.”

Below watch a promo clip from Youthful Daze! Then, let us know if you will be checking out the series with the new casting additions of very familiar names to soap fans!

The James Scott Farewell Interview – Days of our Lives

Y&R's Judith Chapman Heads To The Bold and The Beautiful!

Gosh how I would have loved to have seen TSJ as Adam Newman now that would have made me say MM who . He is another actor that just has the sexual thing going big time.

K/Kay…. Trevor would have been too old to have played Adam Newman. Inasmuch as such a superior actor that he is, Adam is supposedly younger than both Victoria and Nick…..wouldn’t have worked, age wise.
Nonetheless, you are so right….TSJ would have exceeded all the qualities attributed to Adam. He would have been perfect…as Roger Howarth would have been.

I know but a girl can dream right! 🙂

He is 43. A good 43! Maybe Y&R just thought that he was too much older than his siblings. Maybe he wanted too much money? He would have been good, though. Maybe they cast him in a different role? He was a OLTL cast member so maybe Ron casts him as Stephan Cassadine on GH? How about casting him as Franco’s step brother? Two ex-Todd Mannings going head to head!

@Timmm. Sounds good to me…a step brother for Franco works for me….explosive pairing, for sure !!

You bet, k/Kay….Trevor is hot.

Will definitely check it out!

I’m in !! Internet soaps are very close to real.. No phony stuff.. Men say f**k and other assorted words to express themselves/agger whatever.. that is real that is normal.. the young under 40 will watch an internet soap because they are relatable .. they can relate to it.. TV soaps are still GP rating.. and phony, because people when angry do not act as soap network characters and never even a damn from them, not true to life.. lol Most all cable shows are MV and MVS .. hmm I will be starting a season 3 .. ? I… Read more »

I agree. Sonny is a mobster. The first mobster EVER not to say the F word! IF ABC ever cancelled GH, put it on Showtime.

still doesn’t make it a better show. the online version of OLTL absolutely sucked…and they were throwing around shit e like they’d invented the word.

Anytime I can watch Trevor’s wonderful work, I’m happy. I saw several former OLTL players, Robert and James Ford and Langston, along with Theresa from Days in the promo. I’ll have to check it out. Thanks for the info.

thanks for the heads up michael – looks like a great online soap!

This made my day for me ,can hardly wait to see Trevor ,what I would also love is to see Trevor IN something with Michael Muhney.

I am so excited to see Trevor ST. John from OLTL coming to your show in Nov. !!!!!

Oh I would love to see Trevor’s Co Star from OLTL Florencia Lozano played his wife Tea . They were a wonderful team !!!!!

You are so right Cindy. Florencia Lozano is super and she and Trevor are terrific together.

I would watch Trevor St. John in anything….!!! Love him.

I’d like to see Trevor…. but just from this promo, it reminds me of the nonsense young adult, swearing crap from One Life to Live’s web version. Did no like it.

‘supose Trevor and Rick will be some teen’s parents, not the main characters.

oh well, I wish them well.

Is this project the reason why Chrishell Stause left Days of our Lives? Did she leave voluntarily or was she let go? I enjoyed her as Jordan and wish her well in whatever she does.

I WOULD LOVVVVE FOR MICHAEL EASTON TO JOIN HIS MELISSA ON YOUTHFUL DAZE SOOOO THEY CAN BE SOOOO RE-UNITED WE JOLIE FANS ARE SOOOO WANTING THAT & WAITING SOOOOOOO IMPATIENTLY &.THEIR CHEMISTRY IS OUT-THIS-WORLD!!!!!!! BUT WHAT I WOULD LOVVVVE EVEN MORE IS THEM TOGETHER ON A NETWORK SOAP!!!!!! BUT EITHER WAY I JUST WANT THEM BACK TOGETHER RE- UNITED!!!!!!! NETWORK OR ONLINE OR BOTH!!!