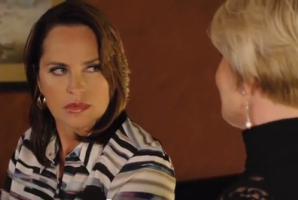 Venice the Series fans have been clamoring for season four of the series and to whet our appetites, Crystal Chappell and the Venice team, have premiered tonight the first official sneak peek promo for the upcoming season which debuts on August 7th!

Crystal took to Twitter tonight to announce the release of the promo relating, “Have fun with the promo!! A GREAT season coming! Love my cast n crew. Amazing work! And again… Bottom of my heart, thank YOU!!! Xo”

So, who will get the girl in season four? Will Gina reunite with Ani? Or, will Lara and Ani say their, “I do’s”? And watch for a shocking final moment of the promo!  What do you think will happen in Venice this season?  Share your thoughts after you watch the promo! And come back later this weekend to On-Air On-Soaps for a season four preview interview with Crystal, Jessica and Nadia!

I can’t wait for August; a powerful story continues!

Venice Season 4 Promo is AMAZING !!! I cannot wait for the August 7th debut. This is definitely going to be an epic season. Thanks for the great article. Looking forward to the interviews laterish.

I Can’t Wait To See The New Season Of Venice Just Seen The New Venice Season 4 Promo And It Just Awesome Can’t Wait To Find Out What Going To Happen To Gina After She Get Hit By That Car.

Bring it on venice season 4 been waiting with bated breath

Please don’t kill off Gina in a car accident. The show would not be the same. I watch it for Gina/Crystal and Ani/Jessica.