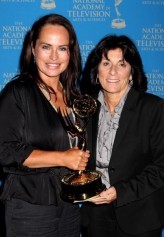 Last night in ceremonies held in Los Angeles at the Westin-Bonaventure Hotel, the daytime community gathered to honor their own in the Creative Arts Emmys featuring many behind-the-scenes categories and two new categories for Short Format and New Approaches.  We are happy to say that Crystal Chappell’s Venice was the victor in the Outstanding Short Format Program.  In addition, it was a big night for General Hospital, who took home the most gold, and a good night for B&B and Y&R!

On-Air On-Soaps spoke with many creative forces behind the soaps and the talent in attendance and will bring you more on this in the coming days.  For now, enjoy some great moments from last night’s winner circle and red carpet area after the jump and a complete list of the winners!

Multiple Camera Editing:  The Young and the Restless

Live to Tape Sound Mixing:  The Young and the Restless

Make-up: The Young and the Restless

Hairstyling: All My Children

Costume Design: The Young and the Restless

Congratulations to everyone involved in Venice. Much appreciated. 😀

Congrats to Chrysall and Venice. It is nice to se her receive the award for the fruits of her labor. Also,GH for their many awards and all the soaps and their personel. Bravo to everyone involved.

Congratulations to CC , Kimmy, and the cast and crew of Venice! Perseverance, integrity, and hard work always pays off. CC, you inspire us !

Congrats to Crystal & Kimmy! There are not enough words to say what you ladies have done for us! I guess a simple “THANK YOU!” will have to do.

Didn’t B&B win best make-up? And does anyone have the correct winner for Musical Direction, as I have seen Y&R, B&B and GH listed at different sites for that award.

wow…surprise….surprise… The only person to win an Emmy this year from DOOL is Crystal Chappell and the was for Venice, not DOOL. Congrats to Crystal, Kimmy and all of Team Venice. They so deserve this after all their hard work. DOOL you are making a mistake letting Crystal go. We will see how long it takes them to realize this….and then, I doubt Crystal would come back and I don’t blame her one bit.

Venice, seriouly????, I wonder if the characters were portrayed by different people, would the outcome be the same.

Congrats to Crystal and Kimmy for this much deserved win. Very grateful that Crystal cared enough about daytime to start a web-series. Not many do, and that was very evident last night with the Vegas infomercial, ahh Daytime Emmys. Webseries will be the new soaps in a few years and I’m glad that Crystal was one of the first to take the lead. Much Respect!!!

Congratulations Crystal and the cast of Venice for doing an amazing job this season. Best move as an Executive Producer for Crystal was taking over the writing duties. So very happy that her peers recognized her work. Two time emmy winner Crystal Chappell. Sounds good. All the best Crystal and cast of Venice.

Congrats Crystal and Kimmie. We knew the both of you could do it. I’m ready for more Venice and looking forward to the Grove.

congradulations venice, you got what you deserve.. your all terrific actors love you guys ..best wishes and much success