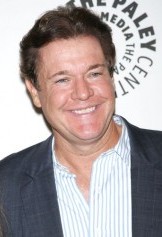 On-Air On-Soaps previewed this brand new webisode of the prequel to Gregori J. Martin’s, The Bay...Far From The Bay starring Kristos Andrews (Peter) and could not stop smiling! Why? Because in this second installment of Far From The Bay, which features Peter searching for his adoptive mother in the big apple, he has an encounter with Steamboat’s, Michael Donovan played to perfection and hilarity by former Guiding Light star, Michael O’ Leary ( who is also the creator of Steamboat!)

In the set up, Peter has taken to a central park bench to get some shut-eye and Michael Donovan asks the young man to move over and share the park bench with him, and from there it is all O’Leary with this brilliant delivery of a fading soap star in a strong comedic turn.  Andros does an excellent job as a confused and slightly amnesiac foil.

Now watch the second installment with O’Leary and Andrews from Far From The Bay, after the jump!

Joanna Johnson set for a return to The Bold and the Beautiful!

Couldn’t agree more! It was perfection!

I’m really impressed with the quality of the Far From the Bay series thus far. The scenes are so clear and the locations are beautiful. I wasn’t familiar with Steamboat before this installment, but I’m interested in seeing it now.

And Kristos. Wow, he’s really coming into his own as an actor…and he’s not bad to look at, either!!!!