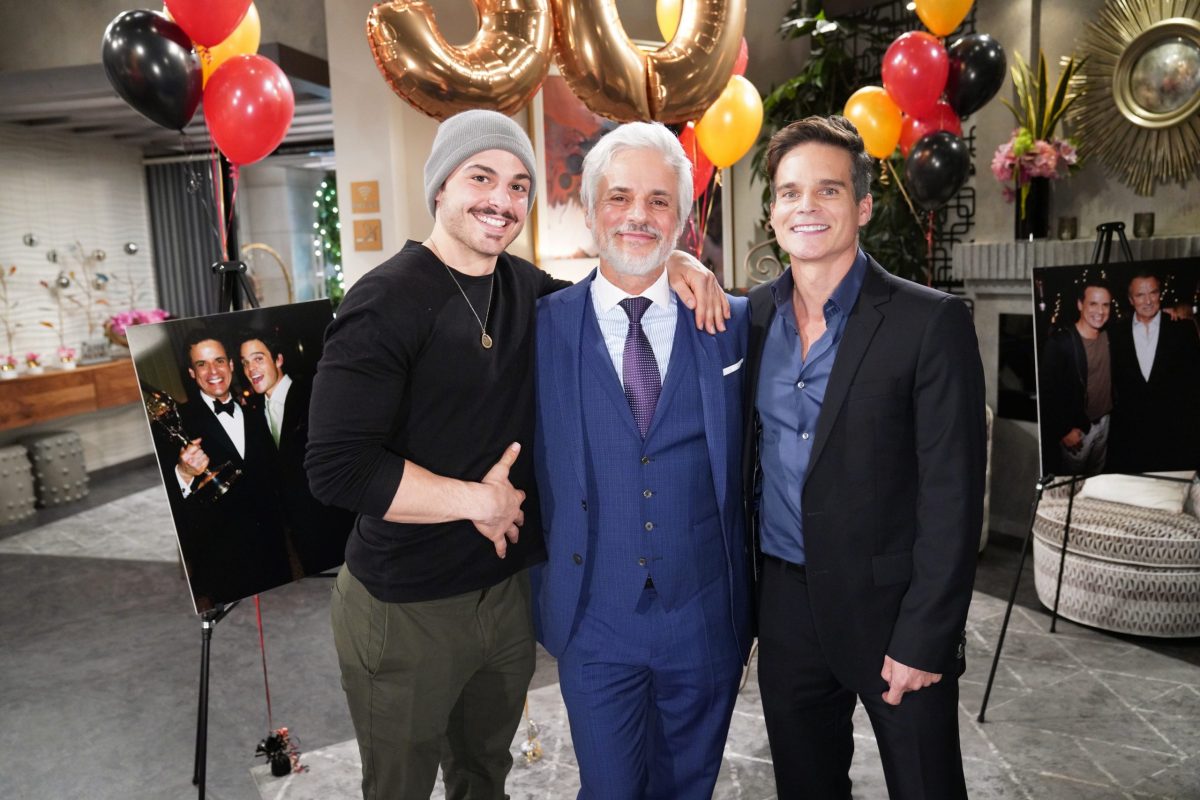 Y&R’s Melissa Ordway and Conner Floyd Talk the Future of Abby & Chance, Being Recasts and The Secret to Soap Opera Tears

Congrats to a wonderfully talented actor. The best way Y&R can honor and appreciate him is to have him on the show on a very REGULAR basis.

Unfortunately, that won’t happen any time soon as Christian will be in NY doing “Cat On A Hot Tin Roof” off-broadway for January and February.

Sadly, that makes the years Christian used very little by the show. Then happy for him he gets other great things.

He was off the show for 4-5 years during this time. So it’s not technically a 30 year anniversary. Michael and Lauren are very popular! I don’t get why they are barely on! Using Lauren to prop Sally was just painful to watch! Lauren was the original batch! Her and Phyllis would have stomped Sally into the ground with their high heels!

So true. Likey should get a story. I don’t understand what is the problem of this writers with them. They have so much chemistry, the actors love working together.

These photos bring back so many great Michael stories from the past. And seeing my favorite Greg Rikaart always so handsome, sexy, and generous of spirit is a treat as well. I really miss Kevin and the whole Baldwin clan. Enough of Abby, stone-faced Chance, Devon, and Dominic. And why are Abby and Jill always playing with Chance’s hair all the time? Yeah, it’s great hair but nobody plays with Nick’s hair or any of the actresses’ locks for that matter.

Soaphound,
I personally don’t like the hair on nuChance.he looks very unkempt , certainly not sexy or stylish. Sometimes people will push back a child’s hair without thinking and I never saw these women as playing with his hair, more of just pushing it out of the way. I also think all that white hair is not becoming to Christian LeBlanc. His face is too young looking.

That looks like a great celebration. At least, we can see the Baldwin/Fisher clan together and Lauren & Michael so well with this great pics. I miss this great couple in a story together.

The Bold and the Beautiful Holiday Party 2021 (PHOTOS) 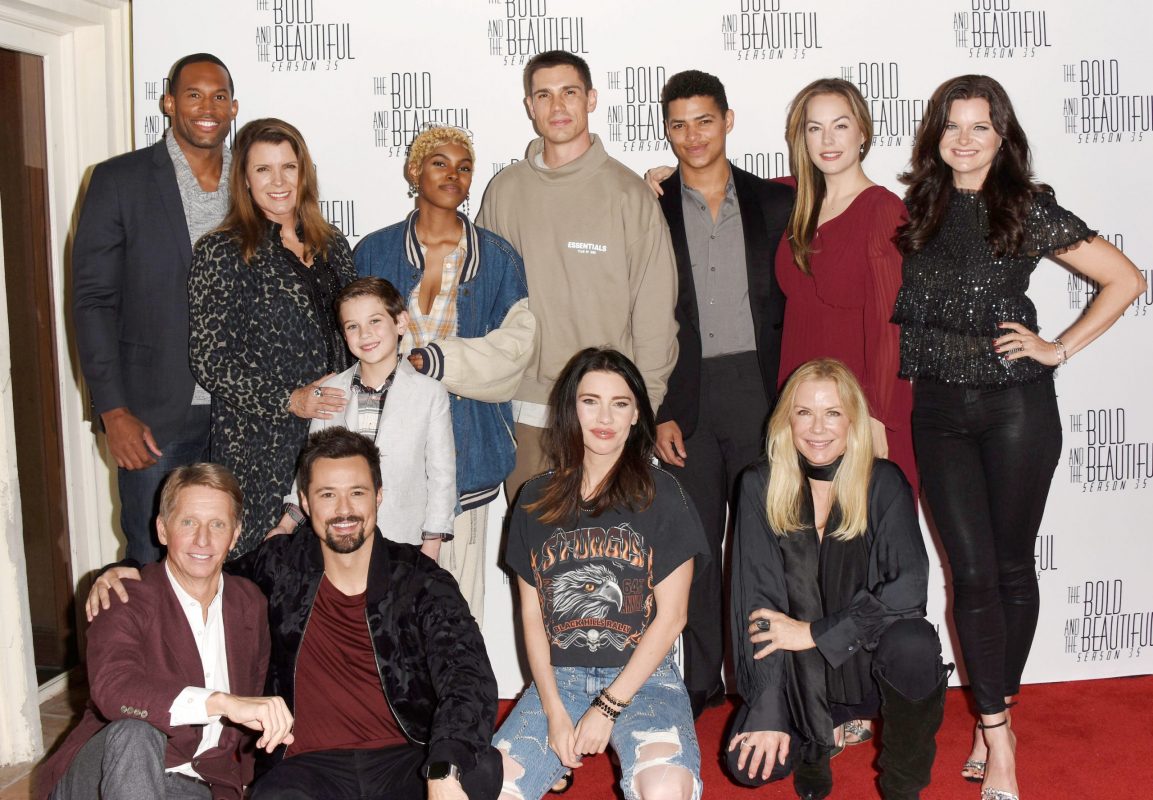 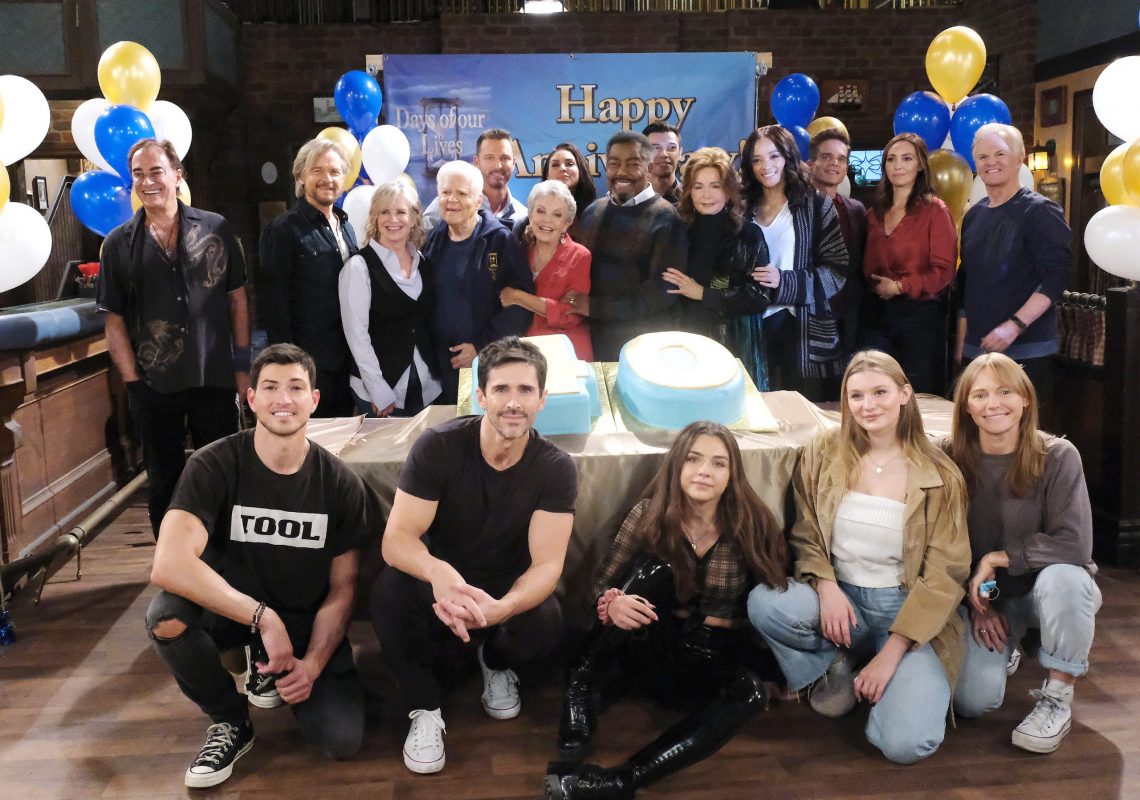 Last Thursday, on the 40th anniversary of Days of our Lives‘ James Reynolds debut as Abe Carver, the long-running NBC soap took some time out from production to mark the milestone with an on set celebration attended by several cast members, creatives, and crew. 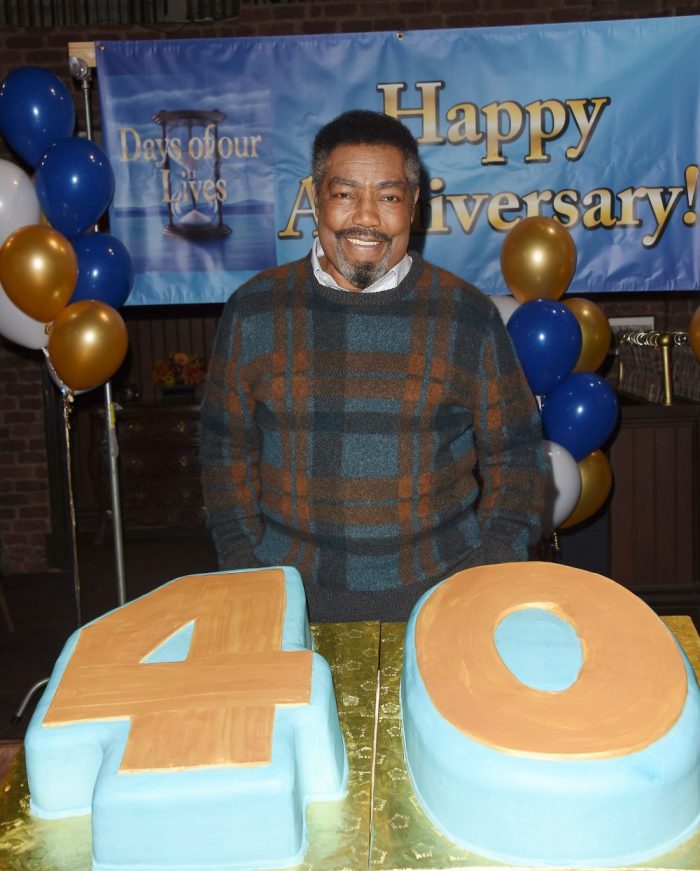 With speeches and love all around, James was saluted by the show for his enduring performance as Abe.  Last Monday, a special episode was crafted in his honor, which saw Abe go to the light and being visited by his beloved late wife, Lexie in a series of scenes and flashbacks.  It was another touching performance by Reynolds, in which we also applaud him with Michael Fairman TV’s Power Performance of the Week honors (more on that in an upcoming post).

During his daytime career, Jim took home the Daytime Emmy for Outstanding Lead Actor in a Drama Series in 2018 for his portrayal, and remains the longest-running black actor in a continuing role on television.

Check out some of the moments from Jim’s celebration below in our photo gallery.

Then, let us know what you thought of James’ performance last week, and share your well-wishes to him for 40 years on DAYS and a job well-done, via the comment section. 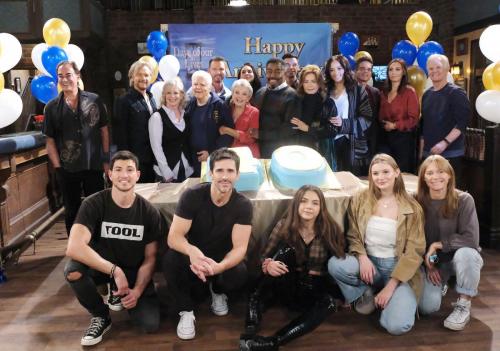 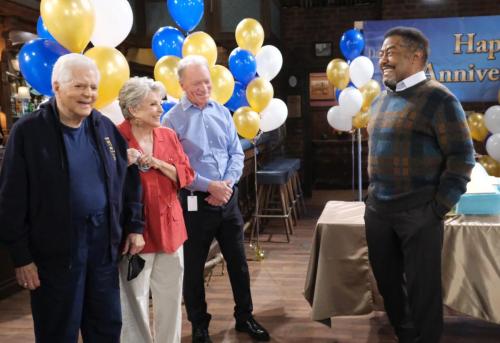 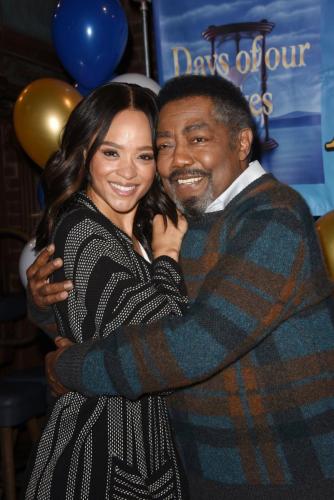 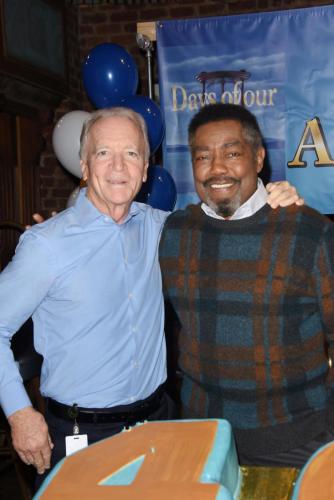 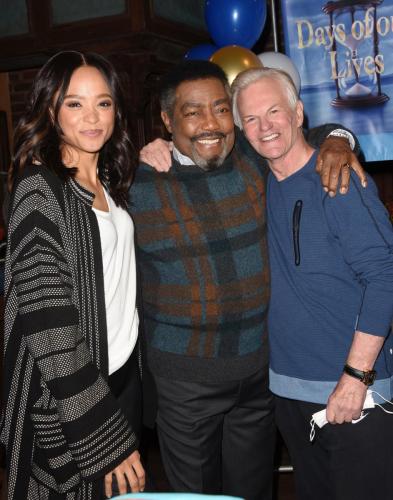 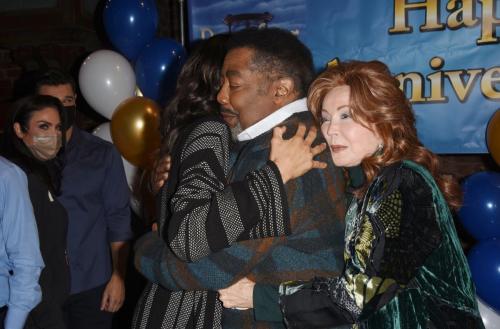 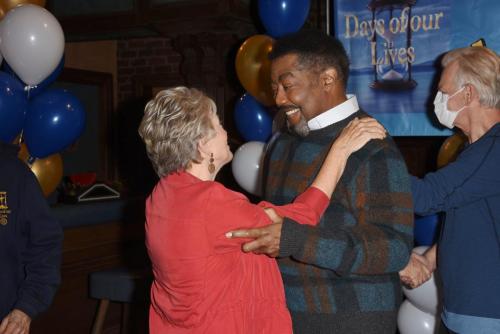 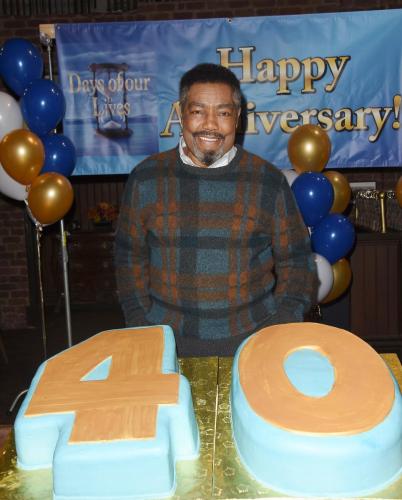 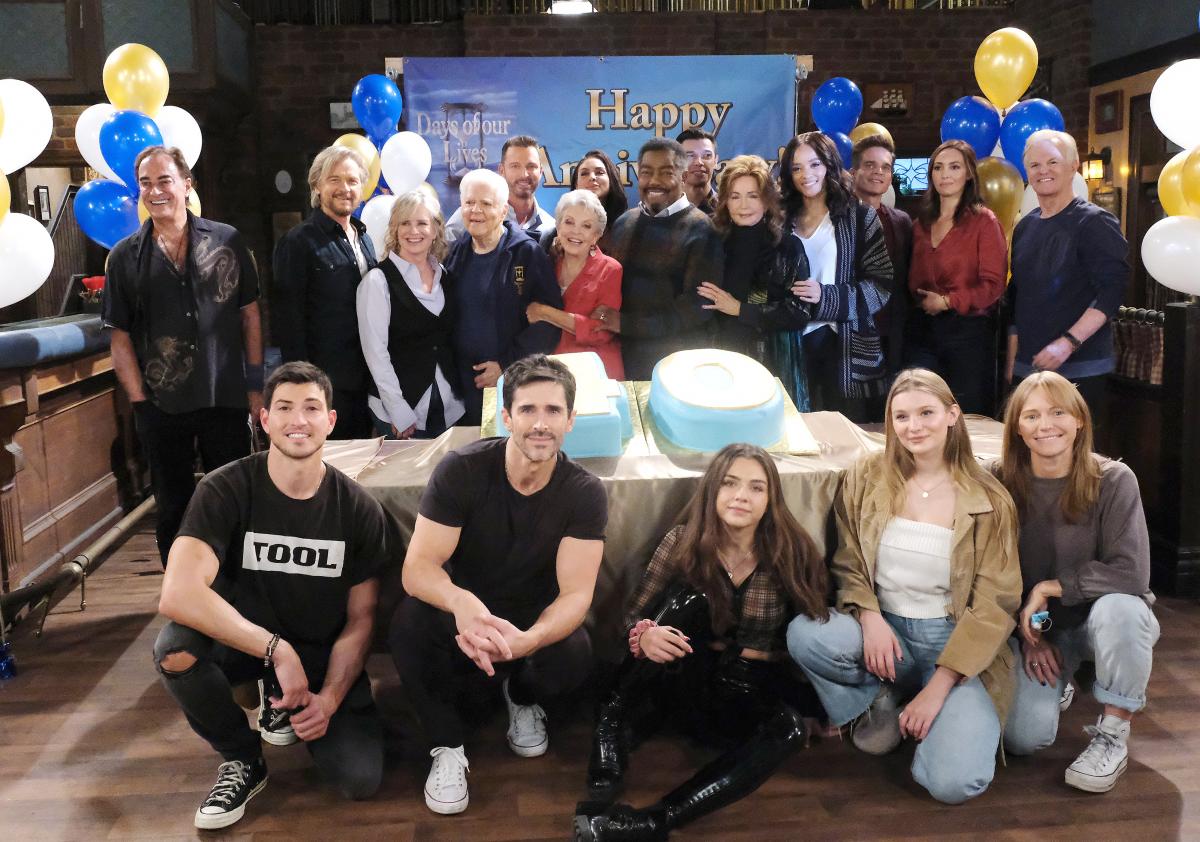 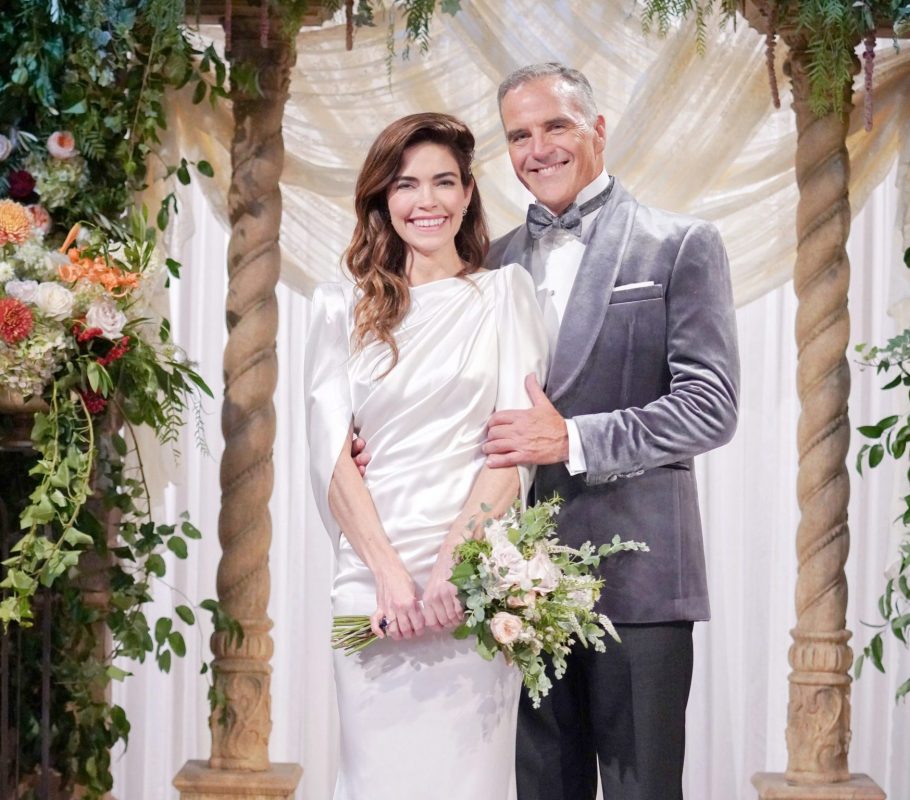 Friday’s episode of The Young and the Restless brought with it the vows and the “I do’s” of Victoria Newman (Amelia Heinle) to Ashland Locke (Richard Burgi), and the couple are now officially married.  However, pangs of guilt, emotion, and ‘how to solve a problem like Ashland’ also filled the ceremony.

Leslie Brooks (Janice Lynde) played the piano, Tess (Cait Fairbanks) sang a song, and Victoria came down the aisle with her father, Victor (Eric Braden).  It was actually the moments between Eric Braeden and Amelia Heinle that were the emotional high points as you could see the love between the characters, and the actors. 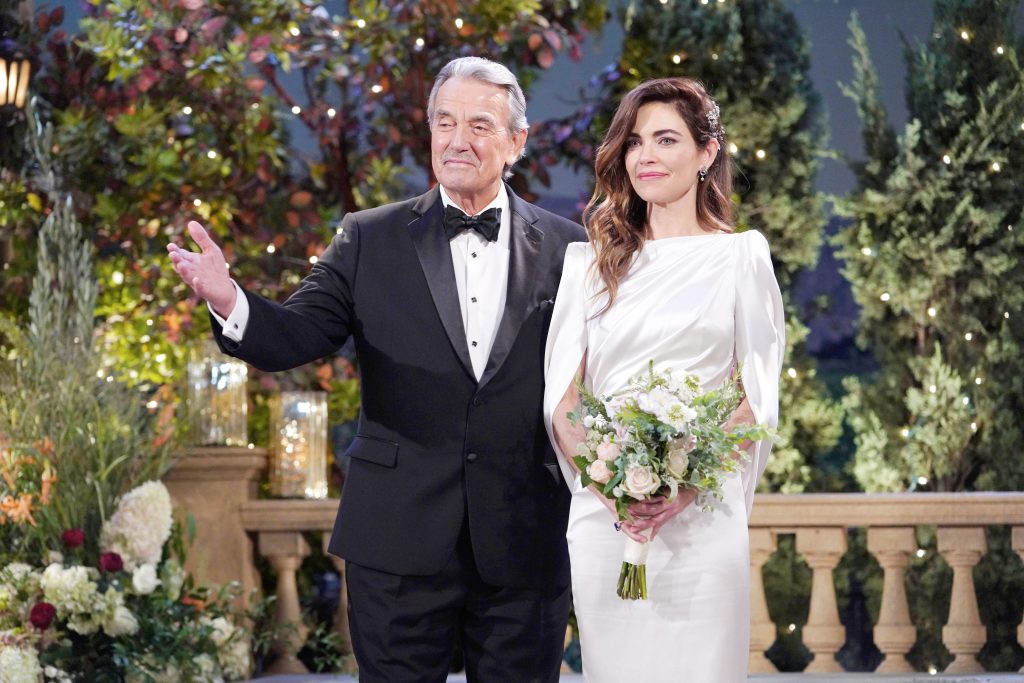 With the nuptials in Tuscany, which brought Hunter King and Michael Mealor’s characters of Summer and Kyle back into the mix, along with Janice Lynde, Victoria was said to never look more beautiful and she chose, after all of Sally’s (Courtney Hope) machinations, to actually wear the dress Sally designed, which was a smash!

The drama came from what was Gaines (Jamison Jones) going to do and what ammo did he have to bust up the nuptials in his revenge against Ashland.  Nick (Joshua Morrow) comes upon him in a upstairs terrace room, and instead of helping him stop the wedding, he actually locks him in the room. 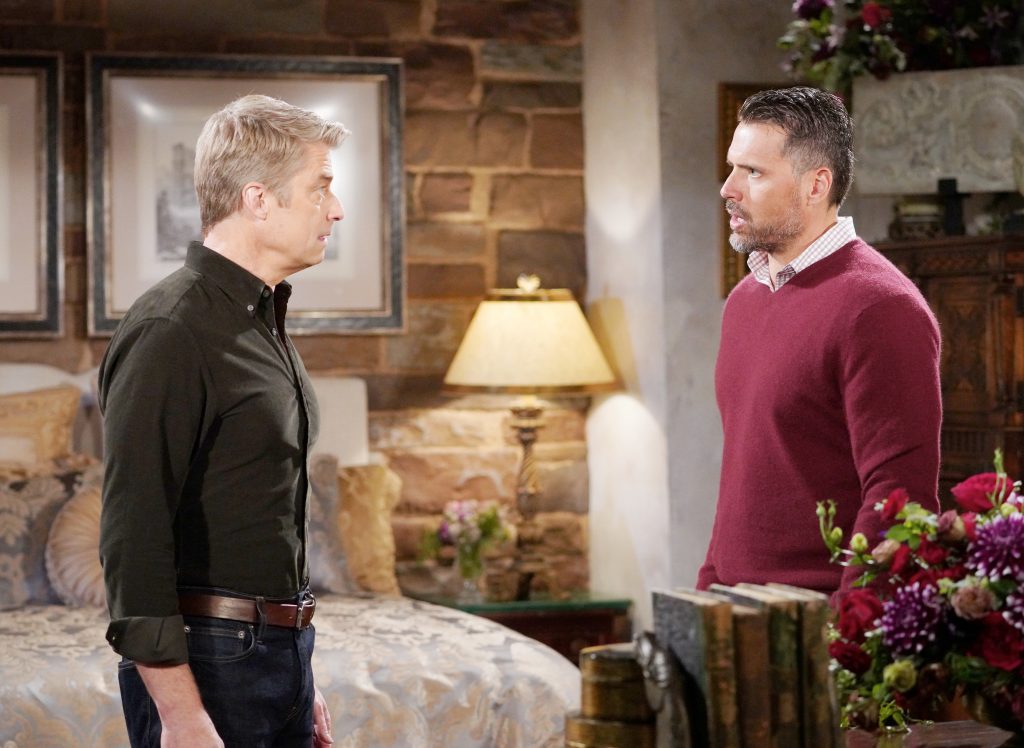 Nick then has a decision to make …. does he stop the wedding, which he knows his sister would never forgiven him for (he was already uninvited to the nuptials), or bust open the situation?  It is none other than Adam (Mark Grossman) that tells Nick to look at Victoria before he makes his move saying, “She’s happy. Do you really want to be the guy who wipes that look off her face on what should be the best day of her life?” Just then, Ashland and Victoria become husband and wife, They kiss as everyone in attendance applauds.

Throughout the wedding, another highlight was every time the camera would pan to Billy.  His face said it all as it was exceedingly and increasingly hard for him to watch Victoria marry another man, let alone Ashland. Jason Thompson played those moments to perfection. After the wedding, Billy goes up to the newlyweds and wishes them well.  During the ceremony, he received a text from Gaines, but did not read it.  When he later opens it, there is a video attachment. 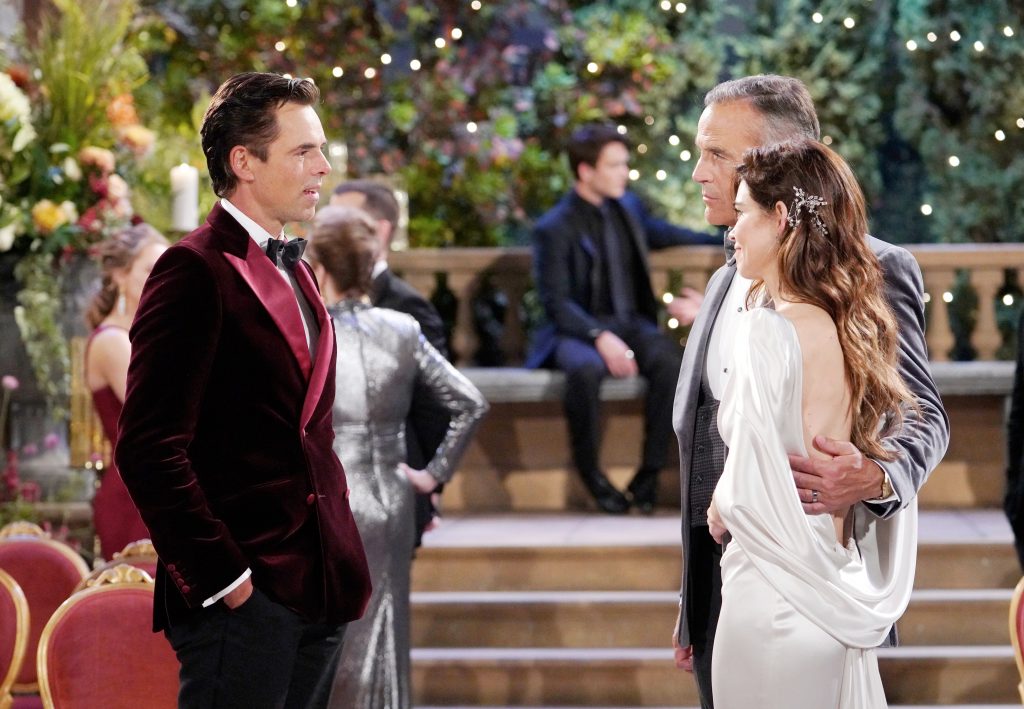 Meanwhile, back in the upstairs room, Gaines is confronted by Nick, Adam, and Victor, who Adam alerted to the situation; instead of calling security, which Nick asked him to do.  A stern Victor tells Gaines that he’s still a threat to Victoria and her company, and he won’t allow that to happen.

When we go back to Billy, who is now with Lily (Christel Khalil), he looks shocked by what he just saw in the video message from Gaines.  He shows it to Lily saying: “He (Gaines) just sent us a video of himself detailing all of Ashland’s crimes including the evidence.” Lily knows this is huge news! Billy tells her that if they don’t publish within the hour, Gaines is going to send it around to other press outlets.  When Lily asks, “What should we do?”  The camera pans to Billy looking at Victoria and Ashland, where Victoria is smooching with her new hubby.  Billy looks very concerned and very torn. Will he be the person to break the backstory of Ashland and his crimes including the forged will and his conniving for Camilla Rhodes’ fortune… or will he not do anything with the intel to save his enduring relationship with Victoria?  We fade to black.  Tune-in Monday.

So, what did you think of the wedding of Ashland & Victoria? Share your thoughts in the comment section, but first, check out some of the moments and looks from the wedding in front of the camera and behind the scenes in our photo gallery below.

Nikki and Victor look fabulous on Victoria's big day.
The bride in a solo photo.
Looks like Sally and Adam have drawn closer!
Billy and Lily strike a pose.
Skyle - show us the love.
Victor tells his daughter, Victoria, how proud he is of her.
Behind the scene photo with Elena and Nate (Brytni Sarpy and Sean Dominic).
Tessa arrives to the nuptials and sings a song for the couple.
Kiss, kiss! Ashland and Victoria are husband and wife.
Father and son, Jack and Kyle, reunited in Tuscany.
Leslie Brooks attended the wedding ringing in a return of Janice Lynde.
The mother-of-the-bride, Nikki Newman, looking beautiful.
And now ... let us introduce to you ... Mr and Mrs. Ashland Locke!