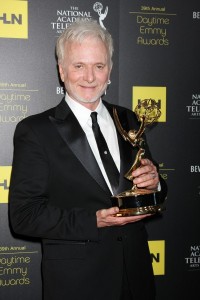 After months of speculation, a deal has finally been reached and announced officially today by The National Academy of Television Arts and Sciences (NATAS) that the Daytime Emmys have a television home for this year’s telecast and it will be once again cable channel outlet, HLN!

In addition, this year the ceremonies will once again be held at The Beverly Hilton Hotel and circle the date of Sunday, June 16th 8-10PM ET/PT!  Gabriel Cornell is once again back on board as the show’s executive producer from LocoDistro!

“Last year, HLN’s first-ever presentation of the Daytime Emmy Awards was the #1 most-watched, regularly-scheduled non-news broadcast in the network’s history, and received terrific viewer feedback both on-air and online.   Our audiences thanked us for tapping into that vital part of American pop culture,” said Safon. “HLN is the news channel that focuses on stories at the forefront of the American conversation, and daytime programming often tackles those same themes and stories. We are so happy to again present the program that honors the best work in daytime.”

“The National Academy of Television Arts and Sciences is very excited to partner again this year with HLN and LocoDistro on our 40th anniversary of the Daytime Emmy Awards,” said Wienges.  “The outcome of this partnership will be a creative show honoring all the genres that make Daytime Television part of our daily lives.”   Wienges also noted that Game Show Icon Monty Hall and Legendary Producer Bob Stewart with be honored with this year’s Lifetime Achievement Award.

Viewer integration will be part of the presentation with featured segments on air and online at HLNtv.com. Presenters and additional program information will be announced within a few weeks. The 40th annual daytime Emmy Awards is produced by LocoDistro; Gabriel Gornell is founder and the show’s executive producer.

“Daytime TV doesn’t have fans—it has personal relationships between hosts and viewers five days a week.  And because of this five days-a-week relationship, there is no stronger connection with audiences in all of entertainment—And we’re going to celebrate 40 years of it from Talk Shows to Soaps,” said Gornell.

So Daytime Emmy fans, are you happy that the Emmys have a television home? And the good news is… it’s not three weeks before the airdate like last year, which gives the show more time to plan!  Weigh-in!

Happy they found a televised home, now if we can just get them to show clips of each nominee in the acting categories, that would be something. Daytime has enjoyed an incredible resurgence – in the wake of recent anniversaries of Y&R and GH – and I’m hoping that they will finally get their due this June! Thank you HLN!

SHARON CASE WILL WIN BEST ACTRESS. YOUNG AND THE RESTLESS

Why not the actress who plays Chelsea…she plays the best charcter on the whole show and most fans love Chelsea and hope she ends up with Adam. Hope Sharon Case is written off the show…too boring for me, and she overacts! lol, im only kidding! Sharon Case is terrific!

Chelsea is a total waste of space. Most boring pathetic sorry excuse character.

NO! There is NO ONE that wants Chelsea with Adam. GOD NOOOOO! It is Shadam and Sharon and Adam for the super core couple of the future long term

It’s great that there is a home for the Daytime Emmy Awards – but what I really want to know is, going forward, will OLTL and AMC actors, directors, writers, etc. be eligible for inclusion as Emmy nominees/winners? Anyone know?

The only news to trump this announcement this year is the rebooting of AMC and OLTL! Was pleasantly surprised by how good a job HLN did last year. This is FABULOUS!

I’m glad, but I really don’t want to watch a lot of hoopla over talk shows and cooking shows, or game shows. Regardless of those shows being a part of daytime TV, the soaps are the ones that attract the viewers who are loyal. The soaps should be the focus of the telecast and they need to get the clips back along with the homage to those who have passed on. That would make me the happiest. Hopefully, HLN is listening and reading what the fans have say. If they do and they get it right, their ratings will soar!

I really hope they return to showing clips of the nominated performances on the telecast! I really miss those!

HLN did a good job considering last year’s ceremonies were thrown together at the last minute. The very basic approach was better than the sultifyingly dumb Las Vegas shows of recent years. I do hope the 2013 ceremony will be classy, elegant, and will feature some clips, tributes, and stars. I hope more of the daytine community will be in place. The Emmys are special and there have been efforts to correct glitches in the nominations/voting process and tio give dramas their due in the spotlight.

I hope Gh wins best show and that katherina kelly langs gets a emmy nod for the first time. Best actress must go to Heather Tom …. She is simply the best.

Could have been better last year. Now they have more notice it should be a much better
show!

The music was horrid last year. Should be better this time…

Kelly Monaco will win best actress for General Hospital, she deserves it !!

Kelly does indeed. She earned it and I hope she gets it!

I hope it’s better than last year. It was not very good, you could tell it was put together fast. I hope the same people don’t win this year, I’m tired of seeing the same OLD FACES, FROM THE SAME SHOWS! Let’s see some new people win for a change.

Hearher Tom once again and this time Kelly Lang for her great performances this year with Susan Flannery! Also think Peter Bergman from Y&R for best male and GH no doubt for best soap!