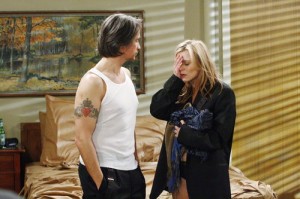 Senior Vice President of Strategies and Digital Platforms for the Nielsen company, Scott Brown spoke with CBS Soaps In Depth about the controversy of how soaps at home viewing audiences are being counted which has had a tremendous impact on the ratings numbers for soaps.   The numbers that are a key component of why they are being canceled!

SID’s takeaway was two-fold ! According to Brown, “Shows viewed via TiVo or DVR within three days of their original broadcast are included in the overall Nielsen numbers.”  The flipside, “When it comes to shows viewed on-line — whether via Hulu or a specific network’s site — only count if the on-line version contains the exact same commercials as the network broadcast. Currently, none of the soaps which can be viewed online feature the same ads as the network broadcast, meaning that those viewing their shows in non-traditional formats are not being counted in the all-important Nielsen ratings!”    Here are a few other excerpts from this very important interview which sheds light on the mysterious ratings system.

Brown on difference between the basic Nielsen numbers and information gathered based on DVR or TiVo views: “We are dedicated to measuring what Americans are watching, however and whenever they’re watching it. With DVRs in almost 39 percent of American homes, DVR viewing is an important part of that equation. For a long time, Nielsen tracked live audience and VCR recording. Since 2007, we have tracked the live audience as well as the programs watched on DVR up to three days after the program aired live for the C3 measurement. This estimate actually looks at the commercial minutes performance to provide an average estimate of commercial viewing. Our Extended Screen Initiative is currently also measuring TV programs viewed on-line and on-demand, which will also be folded into the C3 rating.”

Brown on if networks count DVR/TiVo views: “C3 has become the standard in the industry and provides a more accurate reflection of the programs that are heavily DVR’d. In that sense, DVR audience has become very important to programmers as contributing substantial viewing.”

Brown on if watching soaps on network websites such as CBS.com or ABC.com will count for the ratings system: “Shows on CBS.com or ABC.com that are the exact same as the live broadcast version — with the same commercials — will be counted with the Extended Screen in C3.”

So, are soaps being misrepresented once again by the numbers?  Let us know your thoughts!

Seven Culprits Who Killed the Soaps! Who or what else should join this list?

TV Week: "ABC blew an opportunity when it announced killing of OLTL & AMC!"

If we can get a true number of how many people (overall) watch the superbowl, how come we can’t get a true number (without Nielsen) that watch soaps everyday? There is a large fan base for One Life to Live and All My Children that watch both shows in unconventional ways and I don’t believe those people are being taken into account. Soap fans are incredibly loyal and if ABC thinks they will draw in those viewers to watch the new shows that will displace their soaps, ABC is very mistaken. If it weren’t for soaps, no one would watch… Read more »