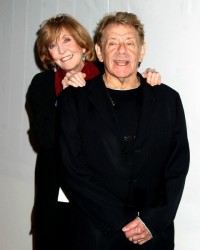 Over the Memorial Day holiday weekend, the entertainment community grieved the loss of the passing of the brilliant comedian and actress Anne Meara.  She was 85-years-old.  Meara, whose husband is actor Jerry Stiller, and is the mother to Ben Stiller, died on Saturday.  Most amazing, and yet heartbreaking is to think that Anne’s partner in show business and in life, Jerry Stiller and her shared 61 wonderful years together.

“Anne’s memory lives on in the hearts of daughter Amy, son Ben, her grandchildren, her extended family and friends, and the millions she entertained as an actress, writer and comedienne,” the family statement said.

In the 60’s, “Stiller & Meara” made the variety show circuits including being a frequent guest on The Ed Sullivan Show.  Meara became a regular on the game show circuit in the 70’s  before landing the role of Sally Gallagher on Rhoda.  She went on to play hundreds of TV roles in the 1980s and 1990s in shows like Archie Bunker’s Place, The Love Boat, ALF, Sex and the City and The King of Queens.

Meara is best known to soap fans for her recurring role as Peggy Moody on All My Children from 1993 to 1998.  Former AMC cast member Cady McClain (Ex-Dixie, more recently Kelly, Y&R ) took to her Twitter account when news broke of the death of Meara relating this message:  “So sorry to hear Anne Meara died. I had the great pleasure of working with her on AMC. She was a real “pissa” with a beautiful heart.”

Eva LaRue, who played Maria Santos on AMC, also tweeted on the passing of Meara:  “Worked w/ Anne Meara on AMC-What stories,what a life,what laughs,what a wonderful human being! Will miss her Xmas Baileys! #RIPAnneMeara”

Susan Lucci (Ex-Erica Kane, AMC) also took to social media and offered up this sentiment on having worked with Meara:  “So sad to hear of Anne Meara’s passing–such happy memories of working with her on All My Children. My heart goes out to her family.”   And finally, Sarah Michelle Gellar, the first Kendall Hart of AMC also took to Twitter to share this:  “I had the honor of working with #AnneMeara on #AllMyChildren. I always knew I was in the presence of greatness when she was around #RIP”

And on Monday, Ben Stiller tweeted out this to his followers: “Thank you so much for all the kind words about Anne. All of us in our family feel so lucky to have had her in our lives.”

Share your thoughts on the passing of Anne Meara in the comment section below.  Also, let us know if you remember seeing her on All My Children as Peggy Moody?

Anthony Geary Talks On His Decision To Leave GH, His Upcoming Final Tape Day & His Leading Ladies On A SPOONFUL OF PAOLO!

Maura West Is Back On The Scene On GH's Friday Cliffhanger! Is This Mysterious Visitor Ava Jerome Or Someone Else?

She was great with her husband, Jerry Stiller, on “King of Queens.”

Anne Meara, have a beautiful journey.

My thoughts and prayers with all of you. Rest In Peace, Anne. Thank you for a lifetime of smiles.

What a sad day……i remember watching them on the great Ed Sullivan Show on Sunday nights back in the 60s……back in those days just three networks and always something great on no matter the time of day……and it was free!!!

Nice to read “tweets” from great AMC ladies…it was a special era of the show and Anne Meara added to the rich tapestry…and of course, she was another great. God bless her spirit and her family.

I remember her great dramatic role as the English teacher in the 1980 movie “Fame” and also a funny comedic role as Pat Hinkle’s girlfriend on a tv episode of “In the Heat of the Night”. She brought such realism and humanity to her roles. She will be missed.

That episode of “In the Heat of the Night” is called “Poor Relations”. It will air Thursday, June 4th at 11 a.m. (CST) on WGN. Set your DVRs. It’s worth it. Her performance is gold.

Oh I love the comments of the actors as quoted above.
She was so good that she made it look easy–you forgot that she was acting.
There was such talent there tempered by a comedic personality framed by a gentle and giving nature.
Long may she run.

Yes! (i do remember Anne Meara on All my Children) now that you mentioned it again here. Its been so long since I’ve watched this I had forgotten a lot of the actors & characters, but seeing her pic I do remember her now. ………..So sorry to hear of her loss

Her and her husband were always two of my favorites growing up and brought me many hours of laughter.

Speaking of AMC though, has there been any update on the lawsuit with Prospect Park? I know they went before a judge on 05/1/515 but not a peep of the outcome.