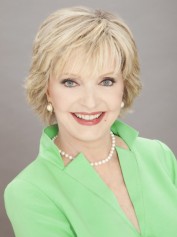 The National Academy of Television Arts & Sciences (NATAS)  has announced that Jeopardy! game show icon, Alex Trebek and Florence Henderson, stage and television star of The Brady Bunch, will host the Daytime Creative Arts Emmy Awards on Friday, April 24, 2015. T he reception and presentation will take place at the Universal Hilton in Los Angeles beginning at 5:30 p.m.

In addition, this year’s Daytime Creative Arts Emmy Award for Lifetime Achievement will be presented to producer, director, Michael Gargiulo, who in his over 50-year career has had a hand in many television classics such as Password, I’ve Got A Secret, The Tell the Truth, The Thanksgiving Day’s Parade, the Tournament of Roses, plus many variety specials for CBS, including the New Year’s Eve Celebration for more than 30 years.”

“I feel like we have garnered two icons of television royalty in having Alex Trebek and Florence Henderson as co-hosts for our grand celebration of the best in the craft of television at this year’s Daytime Creative Arts gala,” said Bob Mauro, President, NATAS. “Adding Producer/Director Michael Gargiulo as our lifetime achievement honoree to the evening’s festivities with his over-half a century of Emmy-Award winning work guarantees a terrific evening as we honor the best in daytime television.”

“Michael Gargiulo is a behind the camera pioneer that goes back to his days with television legends Bob Stewart and Mark Goodson,” said David Michaels, Senior Vice President, Daytime. “From his historic recording of the Nixon Khrushchev “kitchen debate” to the $10,000 Pyramid, Michael Gargiulo has produced and directed just about everything in a career that includes game shows, variety specials and news. We’re delighted to be honoring him with this well-deserved lifetime achievement award.”

What do you think about the choice of Alex Trebek and Florence Henderson to host the Creative Arts ceremonies this year? Share your thoughts below!

Is Ian Buchanan On His Way Out At General Hospital?

GENERAL HOSPITAL: Can Ric's Scheme To Use Hayden To Keep Liz And Jake Apart Really Work?

They are certainly dignified people to have as the hosts, but I still would have preferred actors from our soaps. I hope they make up for this by having a ton of soap actors as presenters and not “celebrities” from outside the soap medium….And I don’t wish to disenfranchise the people from other daytime shows, since this IS the Daytime Emmys, but I only watch for the soap stars. JMHO.

This item isn’t about the Daytime Emmy show that will televised– this item is about a separate show for people behind the scenes, like lighting, make up, set decoration, camera operations, etc. I don’t think they have announced the hosts for the televised show for acting, best show etc. I am sure that show will have soap stars are presenters etc, as well as other daytime personalities.

Gotcha. My eye sight isn’t so good and I completely missed the words “creative arts”. That’s for pointing that out Mary SF.

Interesting. Now, all we have to wonder about is whether or not they’ll name a daytime drama star(s) as the host of the Emmy Awards in April.

Guest
jimh(leave it to beave)

I love Erika Slezak too Jim, I agree Erika and Bob Woods should host the emmys. I want Erika back in daytime. Cast Erika on The Bold and The beautiful as Erics new girlfriend, that would work for me.

I want Bruce Jenner to host the emmys. LOL. That would create drama, and have Kathy Griffin make fun of The Kardashians. I loved Kathy Griffin hosting the emmys last year. She was hilarious.

lol
I was going to say ”you gotta be kidding”
but
I know they are not..
Alex Trebek and Florence Henderson <– lol ohh sheesh I don't care I watch zero daytime, nada..
I watch my 2 soaps during the evening LOL

I love me some Flo Henderson. I met her on the streets of NYC a few years back and she was so friendly and talked to me for a few minutes.

I want to see Florence on the Young and The Restless as Dina Abbott Mergeron, recast the role now.

Guest
jimh(leave it to beave)

Judith McConell would make a great Dina Abbot—she is a fine actress and a vet of many soaps!!!

Hey jimh, did you happen to catch JMcC in the latest Walgreen’s tv commercial? She’s in a nail salon and walks out mid-pedi…LOL!

Florence Henderson is still a sexy lady LOL. She is 81 years old wow. One hot woman.

I am surprised Florence can crack a smile with all that work done on her face.