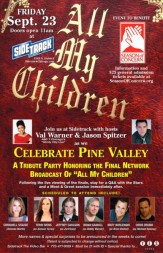 On Friday, September 23rd, join past & present stars of ABC’s All My Children as they come to the Sidetrack Video Bar in Chicago for one last viewing party in honor of the 41 years on the ABC Network. Join fellow fans of the show and watch the finale with your favorite Pine Valley residents.

Preceding the event, the stars of AMC will appear on ABC 7 Chicago’s “Windy City Live” (9-10am CST) as the show looks back at 41 years of the series and chats with the stars. AMC veterans, Walt Willey (Jackson Montgomery) and Cameron Mathison (Ryan Lavery), will make special cameo appearances on the broadcast. Following the live viewing of the ABC finale at Sidetrack, stay for a Q&A with the Stars, a raffle of AMC memorabilia, and a Meet & Greet session immediately after.

Doors open at 11am CST. All ticket proceeds go to Season of Concern. General Admission tickets to the event are $25 until September 21st. Tickets will then be available at the door for $35. VIP tickets are $100 and available online only. Remaining tickets are still available at www.seasonofconcern.org Sidetrack Video Bar is located at 3349 N. Halsted St in Chicago, IL. For more information on attending the live taping of “Windy City Live”, go to their website: www.windycitylive.com

AMC's J.R. Martinez ties for lead in premiere of Dancing with the Stars!