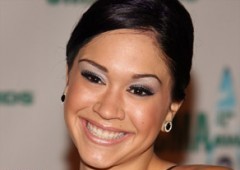 As previously announced, The Young and the Restless has cast season three American Idol runner-up Diana DeGarmo to hit Genoa City to play the new role of Angelina, the Jersey daughter of mob boss, Angelo Venziano!  TV Guide caught up with DeGarmo, whose Y&R debut is set for Monday, October 31st, Halloween!

Now DeGarmo’s  alter-ego has several differences than her.  But one of the most obvious – she can’t sing!  Plus, we learn that Angelina will develop a mad crush on Kevin Fisher (Greg Rikaart).   Here are a few Jersey-licious excerpts from the interview below!

DeGarmo on if Angelina is complete comic relief for the series:  “Well, she’s an over-the-top, gum-smacking, tone-deaf princess whose hair is as large as her attitude. [Laughs] And I’m having a blast! Angelina believes she’s Barbra Streisand mixed with Celine Dion and her father — who thinks his spoiled-brat daughter sings like a choir of angels — really puts the pressure on Devon [the young music producer played by Bryton James] to show her the ropes and make her a success. It’s fantastically hilarious because it puts the poor kid in a horrible predicament!”

DeGarmo on Angelina’s crush on Kevin Fisher! “Ooh, she wants him bad! Angie has her eyes, her heart and her body set on landing Kevin — and it scares him to death! He’s just so sweet and nervous and Angelina loves preying on him. She loves seeing him squirm. Greg and I can’t stop laughing during our scenes together.”

DeGarmo on how it is harder to sing bad, than it is good, and if eventually Angelina will get more on key throughout her story:  “It’s true! It’s actually much harder than people realize. But it’s really liberating to get out there and be bad. You just throw your ego to the wind and sing for Jesus.  We’re seeing where this goes. That’s the beauty of this kind of show — it’s a living, breathing thing and it can change at any time, which I think is beautiful.

So now that you have heard the lowdown on Angelina, are you looking forward to seeing her on the canvas? Let us know.

BIG CHANGES AT DAYS: Lisa De Cazette IN and Noel Maxam OUT as new Co-EP!

Seeing mob and Y&R together reminds me of a stoyline from once upon a time… early 1980s. It was when Paul had his buddies Jazz and such working with him… I think the actor was Phil Morris, andhe had to pass for white, to go undercover and romance the daughter to upend a mob kingpin… the storyline played out for a long time, building then unfoldionglayer by layer… IT WAS FRIGGIN’ AWESOME. I miss that kind of story flow and plotting.

We need something in the show besides the doom and gloom of sick children and who killed Diane — hope they solve that mystery soon. Looking forward to seeing some good comedy, should be fun.