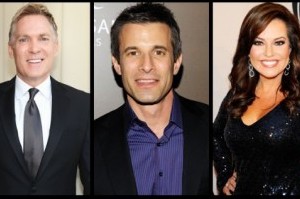 One of the big questions of the night for the upcoming 40th Annual Daytime Emmy Awards has been answered! Today Good Morning America’s co-host and weather anchor, Sam Champion, Showbiz Tonight’s A. J Hammer, and HLN’s Morning Express with Robin Meade host, Robin Meade herself will take over the hosting duties live from The Beverly Hilton Hotel on Sunday night June 16th on HLN at 8PMPMEST live!  In addition, Robin will sing the Outstanding Song Nominees for Morning shows!

Here’s some bio info on the hosts:  Sam Champion is the weather anchor of ABC’s Good Morning America  (M-F, 7-9 a.m. ET) and also serves as weather editor for ABC News.  In addition to reporting the national forecast, Champion frequently travels to weather-related stories around the country and globe. Most recently he reported from Moore, Oklahoma after the devastating tornado. Champion is at the forefront of reporting on the environment and climate change. He also hosts “Sea Rescue,” a half-hour weekly television series broadcast nationally on Saturday mornings.

A.J. Hammer, host of HLN’s  Showbiz Tonight (M-Th, 11 p.m.– midnight ET), has also been tapped to host this year’s LIVE red carpet special “Showbiz @ The Daytime Emmys” along with HLN’s Christi Paul where they will get one-on-one interviews with the evening’s biggest stars including Rachael Ray, Wayne Brady, Monty Hall, Sharon Osbourne, Julie Chen, Sheryl Underwood, Aisha Tyler, Sara Gilbert and daytime TV show newcomer Kris Jenner. Meade will host Morning Express with Robin Meade live from the Beverly Hilton on Monday, June 17, and will be joined by A.J. for a Daytime Emmy’s wrap up, and  Weekend Express with Natasha Curry will also originate from LA and provide a Daytime Emmy’s preview.

What do you think about the choices of Sam Champion, A. J. Hammer, and Robin Meade?  Do you think they will be a winning trio? Let us know your thoughts!

All My Children & One Life to Live Halt Production Early For Hiatus Due To Labor Dispute!

From the bottom of my heart I am so upset Sharon Case will not be able to win outstanding best actress this year. What a wonderful actress that deserved to win for an amazing performance ! She deserved to be at least in the running. Sharon Case is my winner! I am a long time viewer over 36 years. Thankyou 🙂

I submit Kathy Griffin and Anderson Cooper
For the job

Kathy Griffin is vulgar and obscene and disgusting and Anderson Cooper is a bullying crybaby who attacks people when their opinions differ from his. No thanks!!

Who? For once I’m glad the awards are not online, no desire/incentive to watch.

Al I can say is ????? meaning I have no clue who any of the hosts are. I plan on dvr’ing the show and skipping over the non soap categories, so the hosts are irrelevant to me.

My first reaction: Who? Who? and Who? Nobodies — the entire lot of them.

Why can they NEVER seem to get the Daytime Emmy awards right?? No one has even heard of these three.

Not Sam Champion. I can barely stomach him on GMA. Good grief.

LOL! I frankly don’t care that these people are hosting; just glad it’s on the air. I guess these folks were the “give” in order to make it so. Just give me a healthy dose of my soap opera stars and I’ll be happy.

Sam and AJ go to my gym…

Who? How about some DT soap stars?