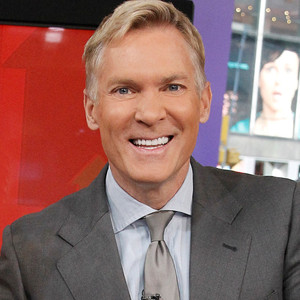 While we previously reported several of the anchors of ABC’s Good Morning America contracts were up for renewal, and several were in negotiations, one of them, weatherman Sam Champion has decided to bolt ABC and head to the Weather Channel!

Champion will relocate from New York City to Atlanta for the new gig which gives him the opportunity to be Managing Editor of the Weather Channel, plus launch his own new morning show and more!

According to The Hollywood Reporter, “Champion is leaving ABC News, where he has been for 25 years, for a robust new role at The Weather Channel, which is a division of the NBCUniversal News Group. He’ll anchor a new flagship morning program, set to launch early next year. And he’ll assume managing editor responsibilities a the channel, which has increasingly sought to become a destination during times other than periodical weather disasters.”

Ginger Zee will now replace Champion in the weather role on GMA!  40th Annual Daytime Emmy viewers will recall this past June, Sam was one of the co-hosts of the awards program on HLN, which honors the best in daytime programing!

ABC News President, Ben Sherwood in a company-wide email related:  “Sam is leaving to become the “on-air face” of the network, which Champion himself characterized as a “once in a lifetime opportunity.”

Sherwood went on to say: “Over the years at GMA, Sam has broadcast more than 1,800 weather forecasts. He has traveled to almost every major weather event in the U.S. As many of you know, Sam’s ‘Go’ bag is always ready and his stellar reporting during Superstorm Sandy contributed to ABC’s Peabody Award for coverage of that historic storm!”

Weather Channel President David Clark stated on the acquisition of Champion: “Sam is already one of the top names in morning television, as well as one of the country’s most respected and trusted weather reporters. He will add a great deal to our network and be a great addition to our already proven and stellar team of talented weather professionals. With his commitment to understanding, predicting and explaining the power of weather in our lives, Sam perfectly embodies The Weather Channel’s brand philosophy, ‘It’s Amazing Out There.’”

So, what do you think of Sam Champion departing Good Morning America for Weather Channel?  Will you miss him on GMA?  Weigh-in!

DALLAS Season Three Spoilers! Sue Ellen Back To The Bottle And More!

Sad…love Sam. I hope Josh does not leave too. These seem to be tight friends

I really love the good morning america family..Sam you will be deeply :(:(:missed. Good Luck!!

He will be missed.

Awww Love Sam he’ll be missed dearly but great news on his new Adventures we’ll always watch the Weather Channel when getting up ready to go to work …. He’ll fit find in there group so we will be watch n SAM huggggs from all of us here in Tampa Bay FL ………..God Bless u Always he made such great Friends over at GMA !!!!!!!

I thought Sam was away with his significant other?

Well I enjoyed him on GMA!!!

I’ll miss the many years of seeing him in the gym locker room after GMA!

I am sure they will just replace him with another laughing hyena that will talk when everybody else is talking. Sam has looked embarrased lately at some of the behavior on that show. I wish him well.

this is such a well deserved opportunity for sam – i know he will exceed the weather channels expectations……….

I missed viewing the news for awhile and when I did the first person I missed was Sam.
Every morning I looked for Sam but no Sam. Today I decided to google him and found
Out he had left! I will definitely miss him as he was my favorite. I wish him must success
In his new career. Good-bye Sam and may God forever bless you.