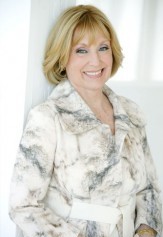 It is hard to believe that in the 26 years that Elizabeth Hubbard played Lucinda Walsh on As the World Turns for all she is worth and then some, that she never won a Daytime Emmy for the role.   The actress who is known to make reading the phone book exciting and chewing the scenery chatted with TV Guide Magazine for her final exit interview with the publication as ATWT winds down it’s final weeks on air.   There are some fascinating excerpts, and three in particular we thought were choice.  One, on the return of Larry Bryggman.  Two, on Van Hansis imitating La Hubbard in the most flattering way, and three, her thoughts on the cancellation of the legendary soap.

Hubbard on Bryggman’s return as John Dixon: ” It was so nice to have Larry Bryggman come back. That was my idea. I ran into him on the street and asked if he’d consider returning to the show to wrap things up.  I was so pleased when our executive producer, Chris Goutman, agreed to have John and Lucinda reunite because he doesn’t always listen to what I say. I remember one scene Larry and I did years ago where the two of us leaned back onto a sofa and it flipped right over! We said, “Can we keep that?” Those were the days when they’d say “Yes!” Now we’ve been through all sorts of regimes where you’re not even allowed to put your feet on the table. You’re not allowed to do this. You’re not allowed to do that. I always felt Lucinda would do whatever the hell she wanted.”

Hubbard on ATWT”s cancellation: “What can one say? I am told ATWT has been replaced by a talk show, something along the lines of The View only all the people will be talking about their babies. Really? Not everybody wants to hear about babies, do they? I think you want to hear about that stuff when you have a problem, but people need something that takes you into a different world, which is what the soaps have always done so beautifully. I’ve been so lucky playing Lucinda — a character who could do anything. She could lie, break the law, she didn’t have to be good and she always had that checkbook ready. Always!”

Hubbard on Van Hansis (Luke) imitation:  “I heard through the grapevine that Van Hansis does quite an imitation of me. So I said to him, “Hey c’mon, young man! Let me see it!” And he did it for me and it was spot on! It was me always trying to do something with the script and it’s true! I’m always at it! [Laughs uproariously] I’ve heard that one of our producers even warns the new actors who work with me. “Oh, be careful, because Liz likes to work. She likes to rehearse. She likes to try things!” Like there’s something wrong with that! But I was very flattered by that warning, because I do care. And I’m not giving up.”

BREAKING NEWS: Kim Zimmer back to OLTL as Echo!

Another "Brady Bunch" star to soaps! Christopher Knight to B&B!

Ms. Hubbard will be missed by this viewer. 25 years. That’s an amazing career to have with one show and Lucinda Walsh was a wonderful character to watch on screen.

I am so sad that ATWT is leaving TV. It has been in my life all my life. My mother used to watch it while we had out lunch. I agree with Lucinda – I won’t watch a talk show – I didn’t start watching Oprah when Guiding Light was cancelled. I guess I will be watching more Food TV and HGTV.
ATWT will be missed.

I have enjoyed ATWT for 35+ years. Lucinda is one of my favorites. I hope another soap snatches up several of you. A fan base would be automatic if they would write Lucinda (Liz Hubbard) into their storyline. As well as some of the other talents of ATWT. I’m saddened like I am loosing connection with part of my day time family. An escape of the hardships of life into a make believe world with more problems and sometimes good solutions … at least a diversion of what ifs. CBS never called me or polled me and they missed a… Read more »

I loved your character Lucinda. she did some hilarious things over the years on the show. She would always scheme, lie, and do anything. I said to myself: Elizabeth Hubbard is a wonderful actress. I miss that show.