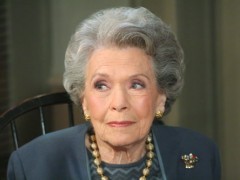 Very sad new tonight in the soap world to report.  Helen Wagner who played Nancy Hughes, the matriarch of the Hughes Family on As the World Turns, for nearly 54 years has died.  Associated Press and ATWT are reporting that Wagner died Saturday, May 1, 2010 and the cause of death has not been announced.

Wagner spoke the first words on As the World Turns when the show premiered on April 2, 1956, and she held the Guinness World Record for playing the same role on television for the longest amount of time, CBS said.  While Wagner, who was born in Lubbock, Texas, was seen less often in later decades, no other network television performer came close to her run playing a single character. Her first words on the show’s premiere were “Good morning, dear.” She was still part of the cast, though with a small presence, in December 2009, when CBS announced that As the World Turns was being canceled and its last episode would air in September 2010.

“All of us at As the World Turns are deeply saddened by Helen’s passing,” said Christopher Goutman, Executive Producer of ATWT. “She is loved by generations of fans and while we will miss her greatly, Helen will always remain the heart and soul of As the World Turns.”   Many know that final scripts are currently being written for the show finale to air in the fall that was going to heavily involve the mainstay families of Oakdale.  Long time viewers were already predicting Nancy would have the last spoken words of the show.  Just how this will impact the finale is yet to be seen.   On-Air On-Soaps sends it’s thoughts and prayers to Helen Wagner’s family.

Related Topics:As The World TurnsDied at 91Helen Wagner. Nancy Hughes
Up Next

Is there a confirmed ATWT tribute slated for The Daytime Emmys?

ATWT's Noah gets his surgery, but who should Luke be with?

This is so sad! I was looking forward to Helen delivering the last line on the show! She had already talked about it and said that she wanted it to be ” Goodnight Dear “.

Many Daytime fans were writing that those would be the last words on ATWT to close the show.

They definitely should have a funeral for the character. Maybe that will be the last ep instead, as a tribute to Wagner.

This presents more of a challenge for Goutman and Co. to get things right at the end of ATWT.

Somehow integrating Martha Byrne back to ATWT is going to be a challenge for them.

Also, all the more should there be an ATWT tribute clip at the Daytime Emmys.

I just cried when I read this. It has already been an emotional week for me as a beloved aunt passed away a few days ago. Helen Wagner was like a member of my family. I just remember commenting to my family and friends who also watch ATWT, on how good she looked during the episode involving Bob and Kim. She did not look a day over 60!!. Amazing!

Helen Wagner was a beautiful woman. The heart of ATWT. My thoughts are with her family and ATWT.

I’m sad that Nancy died. I was hoping she did the last scene in ATWT in september,just the way she began.