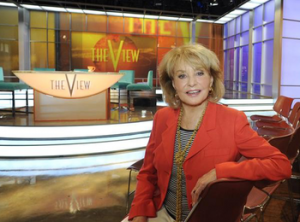 This morning on ABC’s The View, Barbara Walters made a special announcement that was emotional in many ways as the TV icon is departing The View as co-host on Friday May 16th.   As Walters had told the audience last spring that in a year she would be saying goodbye and that time is almost is next month.

Walters who is 84, will be given all sorts of salutes including a two-hour special highlighting her life and career on ABC, from 9-11 p.m. ET on May 16th.

She will continue to executive produce The View, and will be a “lifelong member of ABC News, contributing as news warrants,” Walters told the audience this morning.  ABC News Headquarters in New York City will be named in Walter’s honor during a dedication ceremony that will take place this spring.  The View will toast Walters’ career with a week-long celebration beginning on Monday May 12th.

“I don’t want to get too weepy,” she said.  “I love being on with the two of you,” Walters said about her co-hosts Jenny McCarthy and Sherri Shepherd, and then went on to say about Whoopi Goldberg, “I cannot tell you how much emotion and love I have for Whoopi and admiration.”

Walters said she feels “sad” knowing there are about 30 episodes left for her, but added “It feels right for me. I love this show. I  love what we’ve done.  Itwill continue without me.  But I also know that it’s time.  I don’t want people to say, ‘Is she still here?'”

What do you think about the news that next month it’s finally official, Barbara Walters is exiting The View and in to what would seem semi-retirement?  Comment below!

Alicia Leigh Willis IN at Days of our Lives!

Babs should have retired years ago, the woman is senile. LOL.

LMAO…Sad to say but I find and always have found her to be a quite annoying little old lady..

She looks wonderful for 84 . She is still a vitally strong woman. God bless her. We should all have her looks and stamina into our 80’s. Having no money worries helps too.

LMAO, Barbara Walters is very annoying and a has been.

@Jessica…She may be…or have gotten…annoying but she’s far from a has-been. The woman is a pioneer for females in media…has a prestigious background…has interviewed everyone from foreign dignitaries to local politicians, royalty, celebrities…has traveled the world. Very accomplished woman. Still is.

and Jessica… hopefully one day you will reach 84… and perhaps have some respect for elders.

I agree. It will be sad too… I liked her being around and her shows ever since i was a kid…. 50 now and hope to make life as long and healthy as she has.

She is an amazing woman and for 84 is remarkable! Think of the long hours it takes to prepare for a show, non the less get up, get ready, and have the energy to do it every day. 84! think about it a moment. In addition, it must be very hard for her to acknowledge that it’s time to retire. WE ALL want to stay relevant in todays world don’t we? Imagine how it feels at 84 ? It must have been a tough emotional decision to make. The question looming in her mind…what next…. at 84… it would be… Read more »

Barbra deserves all the kudos she receives!!

Is “The View” a soap opera? Did BW ever appear on a soap opera? Does she or has she ever watched a soap opera? Can she name the 4 remaining network soaps? Does she know which soap is on her network? If the answer is no to all those questions, then Barbara Walters should check into General Hospital.

You know, I have to agree – even this page Site is getting to the point where it’s not (strictly) about the soaps – 2013 was a roller coaster ride for fans of ABC’s All My Children and One Life to Live – between the short lived on-line revivals of both and the swift downward spiral and ATROCIOUS behavior of Prospect Park which many of us will never forgive not forget – and what the heck does Barbara Walters of The View have to do with ANY of this – and frankly, no disrespect intended to her but really who… Read more »

I wish Barbara Walters all the best in her life.Plus i could see her doing specials from time to time.

Barbara Walters is a great news/reporter and has brought us many great interviews with some of the worlds most powerful people..

The View is nothing but old hens clucking for an hour about gossip and unimportant stuff..
My grandpa would call The View the Hen House … 🙂

Your grandpa was wise. Lol. Listening to a bunch of women clucking about politics and religion, when none of them had a clue what they were talking about on either subject grew more shrill and grating with each passing year. Consider some of the hostesses…Rosie…jenny…Sherri….do any of them honestly expect or believe that anyone cares about their take on serious world events is?? LOL. As for Barbara….she admitted in her own book, her own words, and different times on air…that she slept her way to the top. Now for any of you who are going to attack me or call… Read more »

At 84 yrs old and still in the business, she deserves the recognition. I wish her all the best!

All praise to Barbara Walters and her 50 year broadcasting career. Too often we forget the role of the female journalist that she entered back then. She was expected to report on Jackie Kennedy’s hats, rather than hard news (i.e. Cuban Missile Crisis). From those days and with much adversity, Barbara has carved out the role of a female journalist (heck, she also helped shape the quality of journalism in general). She is well deserving of the hoopla and honors, which will be bestowed upon her. Having said that, it is time for her to walk away from The View.… Read more »

While I no longer watch anything on the alphabet network, I must acknowledge Barbara Walters for her amazing career. She is a television pioneer. Her accomplishments helped secure a place for women in journalism and women in the business world in general. While the nay sayers threw obstacle after obstacle at her, she persevered, held her head high and delivered high quality reporting year after year. Thank you Ms. Walters for your hard work, your perseverance, and for helping sharp the broadcast industry. I wish you tremendous happiness and peace in your retirement.

No offense meant here, but regarding this topic I only have three words. IT’S ABOUT TIME.

She will be missed. PLEASE DO NOT bring Rosie back……. Enjoy the show. Need to educate Jenny somewhat.

good luck – enjoy your retirement- take in a few soaps!

“this is just a snippet of OUR Babs on the horizon”

Dear Lord : doesn’t Babs pause for refrain… she listens to herself.. more than any one else does