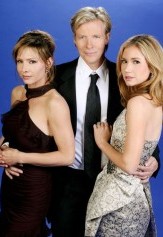 Three-time Daytime Emmy winner, Sarah Brown, is in most unusual circumstance which finds her nominated again, but for the role of Claudia Zacchara on General Hospital, a show where she previously won three Emmys for her original portrayal of Carly Corinthos.  Also adding to the interest is Brown now plays Aggie Jones on the hit CBS soap The Bold and the Beautiful. It’s a interesting set-up for sure,  and in this new feature with TV Guide Magazine out today, Brown details she will be sitting with her B&B cast, and wishing her GH peeps well!

We also learn that coming up on B&B on June 17th, Aggie will finally get confirmation of what she has been suspecting all along, that Nick’s (Jack Wagner) wife, Bridget (Ashley Jones) slept with Owen (Brandon Beemer) and is pregnant. In fact, it goes one step further the next day when Aggie spews it all to Nick!   Here are a few excerpts from the feature:

Brown on if she fails to take home the Lead Actress prize this year: “I’ll be contacting people to break some kneecaps.  I still have my connections in Port Charles.  (Laughs):

Brown on the killing-of of GH baddie, Claudia Z.: “I think the character had gone a little too far. And maybe they felt she wasn’t redeemable. I’m just making this up as I go along because I really don’t know their motivation in letting me go because I still had quite a lot of time left on my contract. This question has me on a slippery slope…”

Brown on B&B’s Aggie’s attraction to Nick. Is it fatal?:   “I think she has a really healthy attraction to him. Of course, he is a married man so I guess it’s not that healthy but it’s human. She has been through a huge ordeal and this man stepped up and cared for her. She has respect for Nick, and I think Agnes would have let bygones be bygones if she had not found out about Bridget and Owen. It’s not really an obsession as much as a deep love for someone she appreciates. She doesn’t feel Bridget is good enough for Nick. Otherwise, I don’t think Agnes would be making a play for him.”

ABC.com commentary with Bob Woods and Hillary B. Smith on Bo and Nora's Wedding!