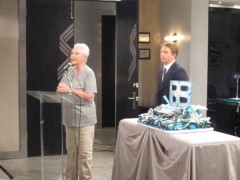 Earlier this week, On-Air On-Soaps attended the on set celebration at The Bold and the Beautiful in honor of their 14 Daytime Emmy Nominations including Series, Writing and Directing nominations for the pivotal plight of the homeless episodes featuring Susan Flannery, Kristolyn Lloyd (Dayzee) and Katherine Kelly Lang (Brooke) that also told the story of Stephanie’s battle with cancer.  Executive Producer and head writer of B&B, Brad Bell presided over the celebration and introduced his acting nominees one by one.  At which time, Susan Flannery, nominated for Lead Actress was the first called up to the podium where she made an incredibly moving speech to the cast and crew.  Towards the end of it, Flannery, holding back the tears, honored her long-time scene partner, Katherine Kelly Lang (Brooke). Here is Susan’s speech below.  We thought it was exceptional and wanted to share it with you.

Susan Flannery: “I am not going to wait and take my chances in Vegas. I am really thrilled that this show has been acknowledged by so many different groups, and we have gotten so many awards.  I think we are all so lucky to have been included to work on the series of shows dealing with the homeless. For that, I am really indebted to Brad Bell.  I think we really accomplished something that was really wonderful without preaching and brought to the audience as social issue that was really important at the time.  But, I would like to acknowledge four people.  I am thrilled to have been nominated, but I think Kristolyn Lloyd (Dayzee) has about 25% of that nomination with me.  I was very concerned when they said they hired somebody new. She turned out to be just sensational. I think she has a long wonderful career ahead of her. I want to thank Mike Stitch for his directing and editing.  And I told him when I first saw rough cut, that he really enhanced my performance and Kristolyn’s performance  in the way he shot and edited the show.  I am very indebted to you and congratulate you on your well-deserved nominations. And, without a wonderful story and wonderful scripts we would not be anywhere. So Brad, thank you for intrusting me, Kristolyn, and Katherine Kelly Lang (Brooke) with telling this story for you.  It was really an honor.

And just quickly, I am thrilled for Scott Clifton (Liam) for being nominated for his acting.  He is a wonderfully talented guy and you deserve it and I hope you win.  I am thrilled for Heather Tom (Katie), because I don’t think there is a more gifted and talented young actress. You are so subtle and so intelligent and thoughtful. I wish you the best, and I hope you win too. Last but not least, I want to thank Katherine Kelly Lang. (Susan gets teary-eyed) She is just the best, and I have been so lucky to have her as my acting partner for 24 years. Katherine babe, I do not know what I would do without you.  You are the cat’s meow, kid!”

For our interview with Susan on her thoughts on her Daytime Emmy nomination, make sure to visit our 38th Annual Daytime Emmy Nominations Hub and the Nominee Reaction Page!

I wonder if Susan will drag KKL on stage at the emmy’s this year?????

That would be a nice gesture 🙂