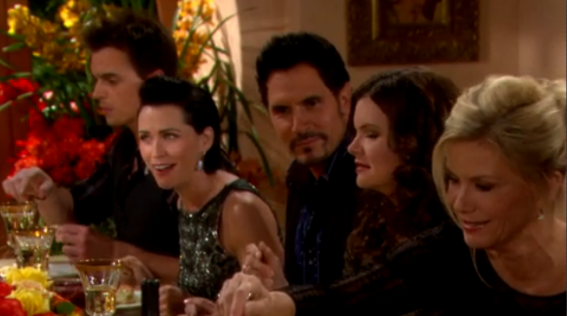 There was a lot to be thankful for on The Bold and the Beautiful’s Thanksgiving episode which aired on Wednesday.

In what started as perhaps perceived hokey of an air show, turned out to be quite the contrary.  In fact, it turned out to be an emotional rollercoaster for many of the guests.  You can blame, or give applause, to Hope (Kim Matula) for concocting her Thanksgiving plan to bring the Logan and the Forrester families together and try to unite them by placing strategic place cards for the guests.

Of course, Bill (Don Diamont) was seated next to Katie (Heather Tom) and Quinn (Rena Sofer)!  Brooke (Katherine Kelly Lang) was next to Katie!  Wyatt (Darin Brooks)  and Liam (Scott Clifton) were on either side of Hope!  Hope asks for each guest to say something to the person to the right about why they are thankful for them.   Oh boy!

The most touching moments came when it was Eric’s (John McCook)  turn and he was beside Dayzee (Kristolyn Lloyd). Eric recalled how important Dayzee was to Stephanie, and from there the gathering clan holds hands and pays homage to the late Stephanie as the camera pans to her picture on the wall.

Later, it was Heather Tom (Katie) who provided the most emotional impact on the episode as Brooke tries to remind her alienated sister about how they are family no matter what.   And next, when its Katie turns,  she wants to pass on saying something nice about Bill.  Ultimately, she does say something about him being the father of her son, Will.  Bill is very uncomfortable being seated next to all these women he has had relationships with and tries to say something about each of them, which he does, but not so well!  Wyatt tells Hope how special she is, and how he is glad she walked in to his life that day when she snapped pictures of him on the mountain.  But Hope in turn, says something about Liam and how much she is loved by everyone at the table!

Kudos to The Bold and the Beautiful for an episode that could have been very sappy, but was heartfelt instead!  What was your favorite comment by the guests at the Thanksgiving table?  Did you enjoy the episode and the nod to Stephanie?  Comment below!

The episode was great. I loved it. My favorite was Eric to Dayzee and the remembrance of Stephanie. I love Hope and the Spencer men and what Wyatt said to her and what Hope said to Liam. When Liam went to Hope later, that was very nice. Great job, B&B.

I haven’t seen it yet but thIs week was one year since Stephanie died.
She should never have been killed off.

i hear you but susan flannery left b&b – she wanted out so she retired………….

Jonathan, Susan Flannery (ex-Stephanie) wanted to leave the show after 25+ years and Brad Bell didn’t want anyone else playing the role. So the decision to kill her off was an easy one. She even extended her contract by 6 weeks if I’m not mistaken so that Brad could write her exit storyline. The worst thing that came out of that storyline was the relationship between Taylor and Eric, which thankfully ended with Hunter Tylo’s exit from the show earlier this year.

I never got on board with Eric & Taylor but Quinn & Eric is a bore also. We have a great looking guy in Thorne/Winsor Harmon yet he can’t get a love interest ever!

I LOVED THIS EPISODE SO MUCH!! heather tom ROCKS!! That seemed so real like at any thanksgiving table she was really great!

As soon as i heard Hope’s gushing idea I cringed. Like I do each time she appears on the screen. What came of her decision was a pleasant surprise for viewers but an unpleasant one for the denizens of this soap. I waited with baited breath as each person had their due. It was an exceptional episode and hopefully a vehicle to move stories forward and away from Hope. Also enjoyed the repeat epi of the Italy wedding with stephanie and steffy as each step she took made her day progressively more miserable til she fell off the side of… Read more »