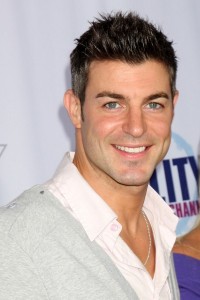 Jeff Schroeder, one of the most popular contestants ever on Big Brother and now a host on CBS.com, is making a return visit to the The Bold and the Beautiful on the upcoming August 27th episode where he plays … a janitor/production assistant on the Room 8 show-within-show that stars Karla Mosley and Lawrence Saint-Victor’s characters of Maya and Carter!

Schroeder talked with TV Guide Magazine’s Michael Logan to get the low down on what goes on when he makes his appearance on B&B, and what he thinks about all those nasty remarks and slurs the houseguests of Season 15 of Big Brother have been making that has caused a media firestorm.   Here are a few excerpts below!

Jeff on his role on B&B and returning to the soap for the first time in four years: ” (Laughs) I’m still screwing up my lines! I had a scene with Karla who was super-awesome but, when we were on set, it was all so real and she was looking right into my eyes and I got caught up in the moment and forgot what I was supposed to say! I got it on the second take, so I didn’t embarrass myself too badly. I play a production assistant—slash—janitor at the Room 8 show. I have a mop and a huge garbage can, but I really felt at home cleaning floors because I got into a little trouble in high school and had to be a janitor for the rest of my senior year.”

Jeff on what his reaction to the racism, sexism and homophobia that’s running rampant in the Big Brother house this season:  “I am so surprised! The houseguests know they’re on camera 24/7 and should be much more aware of what they’re saying. Now they’re going to have to pay for it once the game is over. Some have already paid by losing their jobs, though they don’t know it yet. Hopefully, they’ll learn from what they’ve done wrong, but I don’t think the answer is spreading hate with more hate. I’ve seen a lot of things being said about this situation online and some of the viewer responses are just as ugly as what’s being said in the house. I don’t like all this public bashing. Fighting hate with hate doesn’t work. Don’t get me wrong. I don’t condone the terrible stuff that’s being said in the house, nor am I trying to protect those players but I believe educating them when they get out is the key. You can only hope they’ll learn from their mistakes and become better people.”

So what do you think about Jeff coming over to B&B for another visit? What is your take on the intolerance and bigotry shown by the houseguests on Big Brother 15?  Weigh-in!

He doesn’t condone it yet he himself is homophobic. Interesting. He had such an issue with dumbledore being gay that he fought with Kalia about it.

Jeff is against all the racist and homophobic remarks in the Big Brother House this year? This from the guy that said Gays should NOT be allowed to teach kids in schools when he was last on the show???? Ok.

I am so happy to hear that Jeff is back on the soaps. Well deserved. Jeff is a very nice person with a wonderful spirit. If he step back into the house he would bring some positive energy. That’s what’s needed right now!!! It breaks my heart to see the bigotry on the show this season. I don’t think that they can change the way they feel, they have a right but it doesn’t make it right. It’s not what you say, it’s how you say it!!!!. It’s 2013 and those people still don’t get it. Shame on them!!!! When… Read more »

Awful cbs is such a mess. They’re subjecting howard and candace and helen and the other people to the degrading comments from gina marie and jeremy and aaryn all for ratings. Their ratings rose when cbs aired all of the crap from those 3 contestants. They would have been booted off the show if ratings plummeted after cbs aired it. And aaryn is the worst. That name is obviously an anagram for aryan w/c is really apt for her. cbs is criticizing aaryan for mocking an African american w/ her stereotypical speech and telling an Asian american to “make rice”.… Read more »

Jeff is so simply and yet so awesome!

Like Jeff said, these ‘contestants’ know FULL well what to expect and what they have to do to compete. Any consequences of their disgusting behavior is fair game once they are outside. I don’t want anything sugar coated BUT this whole show has disintegrated into a hot mess of hatred and superiority. Where is the fun? Where are the contestants that would use their mind instead of spouting grade school level taunts? Not a fan CBS, not a fan.

Educating them? They’re too stupid and racist to understand something that basic. aryan kept saying she’s not a racist and doesn’t understand how anyone would call her that. She can’t be educated bec she’s that racist. It’s not surprising that there’s racism towards racial minorities bec that’s america’s culture. But it’s strange how much blatant racism is recently being directed at racial minorities who are public figures. There’s cbs reality tv show and now nbc latino is reporting that pop singer marc anthony is being bashed w/ racist slurs for his rendition of God bless america on mlb game. Racists… Read more »

Adore Jeff, and happy to see him involved in any project. He lights up a room with his smile and sincerity. As for the BB houseguests this year, educating them is a great idea, because sadly, a few of them are downright ignorant, but will get a huge dose of reality when they leave the Big Brother house. Wishing Jeff much good luck!!!

Racist jeremy was voted outta the house and eliminated! Only 1 person didn’t vote for him. Bye to that racist jeremy! And racist aryan nation was nominated! On b&b: jeff was asked abt his acting gigs and how he’s taking away acting gigs from trained actors bec he’s a reality tv personality. He answered that reality tv personalities get a lot of opportunities w/ acting. It’s bec anyone can act. Someone that says his lines can act. That’s the only requirement really for actors. The proliferation of reality tv shows demonstrates that. It’s pretty much understood by the audience that… Read more »

I’m glad Jeff got a role on Bold & Beautiful although I don’t watch soaps anymore(hehe), but I may tune into just to catch him. Also happy to find out that Jeff’s a Gemini like me. Thought he was an Aquarius for some reason. Back to the subject. I’m soooo glad Jeff spoke his mind about the Bigotry in the BB house. He’s right. You definitely can’t fight hate with hate, “you gotta love unselfishly”(Yolanda Adams-Gotta Have Love). J eff, Rachel and Brendan really touched my heart when they spoke out against the wrong doing. They’re truly good people! Cool… Read more »