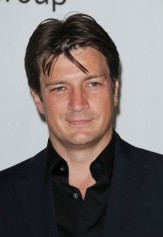 Last night On-Air On-Soaps was at the season three premiere of the ABC primetime series, Castle and caught up with its star Nathan Fillion to ask him what attributes the next actor that embodies the role of Joey Buchanan on One Life to Live needs to have, now that the soap has put out a “casting call” to find the next actor to play the key part.  Fillion played Joey from 1994-1997 and then made a brief return  in 2007.   Nathan offered insight into the role, the dwindling soap genre, and his love for his former castmates that he holds close to his heart to this day.

Fillion on what attributes the next actor to play Joey Buchanan needs to have:  “I just read that they were recasting.  You know,  so much has happened since I played Joey.  I think he even became a priest, I know, at one point.  I will say this, both for the character and for the actor playing the role; you have to be willing to learn.  That is the attitude I went into One Life to Live with and it served me very well. There is more than enough experience and amazing wonderful people on that television program. For a first job that was the most incredible experience I could ask for, that prepared me…. and I cannot even tell you…. and every day I use what I learned on that show.   Those people were so kind to me there; Erika Slezak (Viki) Robin Strasser (Dorian), Bob Woods (Bo), Jimmy (Max) and Kassie DePaiva (Blair), Phil Carey (Asa) and Clint Ritchie (Clint)… God rest their souls. I learned so much for those people and I am going to cry right now thinking about it.

Fillion on the amazing treat for fans of OLTL and his castmates when he returned for a few episodes in 2007  to reprise the role of Joey, after his stardom!  “Is it so amazing? I owe them so much and I know that all to well. I have never worked so hard and so much. In three years of working on a soap opera, I have probably logged more on-screen time than the rest of my career, except perhaps my last three years on Castle. That is a lot of on-air time. You have to be technically proficient, and you have to be able to act with distraction on soaps. There is a weakness in the soap genre, and that is not every show can be gold.  It’s an hour long a day and you can’t work it, work it, and work it, till it’s amazing.  You just don’t have the time for that.  There are not the man hours or the manpower.  There is a weakness in that sometimes you got to work together to take the best of what you have, and make into the best that you can possibly do,  And, sometimes it’s a matter of resources, We were in New York City in a small building saying, “OK. This set is the woods and it’s 15 by 25 feet… but this is the woods, buddy.” And that is all you got, and you gotta make it wok, and you gotta make it real and you have to let people indulge in the story, and in invest in the story.  You can’t just throw your arms up. I learned that and I learned that so incredibly well.”

Fillion’s thoughts on the dwindling soap opera genre.  “I certainly say that it is sad.  I certainly don’t want to be an end of era, and even just for young actor’s like me coming up, and what an intense and incredible experience it was, but just for the audience sakes, as well.  Obviously there are people out there who still enjoy them.   I remember when I got One Life to Live and then the O.J. Simpson trial started, and every network covered it every day and broke that chain of investment for the audience, and the ratings never recovered from that and it slowly, slowly  dwindled.  Do they need to be reinvented?  I don’t know.   I hope it’s not a dying breed, and I hope it does not go out.  Maybe the networks should pool their resources and make what few soap operas are left stronger, and rather than let them slowly die, infuse them with energy and money and invest… so that other people can invest.  And if it was not for One Life to Live, I would not be standing here at the premiere of season three of Castle, that is for sure.”

ATWT's departing Maura West chats about her new role as Diane on Y&R!

I liked your interview with Nathan, Michael. It’s too bad that he can’t make a guest shot on OLTL. I do enjoy him on Castle. He has come a long way. If fans haven’t seen Nathan on his prime time show they should. He is very charming and funny as a writer of crime story’s and then helps police solve crimes. I’m glad you caught up with him, Michael……

Nathan – I was watching OLTL during the days you were on the show. I have one word for you – “gracious.” So many people turn their noses down at daytime television, but it is obviously a true learning experience for young actors. That you give credit to the “roots” for your career start certainly says something about you. I admire you tremendously and can’t wait for Season 3 of Castle. Thank you so much to you, Stana and the rest of the cast for your hard work. You bring a lot of fun to this crazy world.

Wow! What a love letter to the soaps. He has nice memories and doesn’t shy away from it.