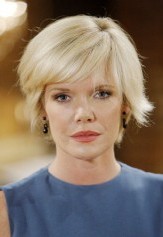 As many longtime viewers of As the World Turns will have the difficult task of saying goodbye to the fantastic character of Carly Tenney, created by two-time Daytime Emmy winner Maura West this Friday, they will have to look no further than the same network, different timeslot, and different soap to catch the actress again on their daytime screens.   On October 8th, West debuts  on The Young and the Restless as the recast Diane Jenkins, and is set to cause havoc and pull some string and create some friction for many of the folks in Genoa City.  TV Guide spoke with Maura about the new role and the end of ATWT.  Here are a few excerpts

West on if landing the role on Y&R lessened the blow of losing ATWT: “The end of a show like that is very moving. The tradition and the longevity is really quite impressive. However for Maura, as an actress, it was really time to say so long to Carly. I don’t mean that to sound bad. It was a terrific experience but it’s too long for an actor to play one part. So while I will miss it, and miss my dear friends, it was time. Carly was a gift, a dream of a character who could do anything — and did! She was never mundane. In fact, she was like playing several different characters all rolled into one. She’s what made me stay as long as I did.”

West on if she was tempted to look at the work of past Y&R Diane’s- Alex Donnelly and Susan Walters to prep for her new gig: “Absolutely not, and that’s no disrespect to those women. That would be a mistake for me as an actress. I’m not interested in that. The show did send me a list of big Diane events — the marriages, the sperm, the burning of the pool house, and all those things, but what is really exciting about this character is that there’s been no human story for her yet. It’s just this list of events. So the writers and I have a chance to create a character together that’s really three-dimensional — one that hasn’t yet been explored”

"Castle's" Nathan Fillion on what the recast of OLTL's Joey Buchanan needs to possess!

Thx Michael, I loved Maura and can’t wait to she on Y&R

I am glad we will be seeing her on Y&R. she has always been my favorite actress for as long as I can remember and when they announced they cancelation of ATWT the first thing I thought was ”no! Maura!” it’s still a waste, shame… sad thing that ATWT is cancelled but knowing I will be tuning into Y&R for Maura West is comforting. Supporting her all the way!! and I’m sure she’ll blow our minds yet again with Diane as her new character, though Carly will always have a place in my heart!

No disrespect to Maura, but I think that Alex and, particulary, Susan did a phenomenal job of “fleshing out” the character of Diane. No one could push Phyllis’s buttons the way Susan’s “Diane” did. I am just sick that she won’t be reprising the role!! Please, Y&R, no more recasts!

Thanks for sharing, the interview Michael. I believe, she will do a wonderful job as Diane. I hope, the Y&R viewers give Maura a chance as Diane. I’m sure, she will do great as she did with the Carly character.