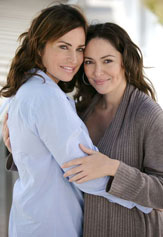 Together again in a joint interview, soaps dynamic duo of 2009/2010, Crystal Chappell and Jessica Leccia speak with TV Guide Canada’s, Nelson Branco.  First they are named by the TVC as Sexiest Couple two years running, and then the twosome discuss Crystal’s Emmy nod, Venice, Guiding Light, working together, and the demise of OLTL’s, Kish.  It’s great to read these two banter back and forth, like the perfect compliment to each other.  Something that first charmed audiences on Guiding Light and now with Venice.

Here are a few excerpts with the sensational and sexy Otalia or Giani, depending what soap you want to refer to.

Why Chappell, according to Branco was deemed “a sexual game-changer”, in reference to the actress’s sexual prowess that would make a previously straight woman, Natalia, be hot for her.  Jessica: “There had to be something about Olivia that was irresistible to inspire a seemingly straight woman to deny and turn her back on everything she’s ever believed in [laughs]! ”

The tables were turned when Crystal was asked why Jessica was sexy!
Jessica: “Um, is it because of the sexy rosary I wear every day [laughs]?” Crystal: I love that rosary! I wanted to wrap your beads around me every day! Jessica is a beautiful woman. She’s got this freedom and joy that simply radiates. Her aura is also very sexy. She’s inviting. If you walked into a room, you would immediately gravitate to Jess. She’s the kind of girl you just want to touch. She has a beautiful smile and soul. Just like her daughter. Her bright sense of humour is very attractive.”

Leccia on if Chappell made her a better actress during her time on GL: Jessica:  “Oh, please! Yeah! Of course. I was new to this medium so I was still trying to feel my way around. And in the beginning, Natalia was kind of a hot mess. She was all over the canvas. After working a little bit with Crystal, I was super-excited to learn we’d be working together more often. She’s amazing. I could work with her all day long. So, yes, I learned a thing or two from Crystal.”  Crystal: “Let me interject here. Jessica is a fierce actress. She’s a brave woman. She brings that to the table. She’s receptive. That’s all you want from an acting perspective. She’s not one of those actors who are trying to win a scene. Acting is a collaboration. You don’t want a competition when you come into work because no one can act by themselves. I needed Jessica. I learned a lot from her in the very same way. When it comes down to it, we’re just there to tell a story [and not inflate our egos] and honour our characters. You have to be of that mindset. I’ve worked with actors and actresses of that mind set who want to win the scene. It never, ever works! The story will fall flat every single time. I’ve never seen it work one single time. Maybe Jessica didn’t have a lot of experience on daytime TV, but she brought it regardless. She came to the table with commitment. That’s a great actor.”

Biased branco is at it again. He’ll insult Wheeler’s production model on GL, yet Chappell defended GL from Branco’s diss. He’ll call out Wheeler, and blame her for GL. But he’ll say ABC WROTE kish out instead of saying headWRITER Carlivati wrote them out. And he’ll say ABC axed kish instead of saying Valentini fired them. He’ll even go after Catholics when he dissed Natalia, w/c is par for the course since he critiqued Wheeler being a Mormon in his columns.