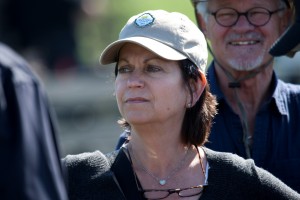 Since the cancellation of TNT’s Dallas after its third season bombshell cliffhangers, fans have started their (previously reported) campaigns to resurrect the show and show their support that they want the Ewing drama and Southfork to return for a fourth go-round!

Meanwhile, Dallas showrunner Cynthia Cidre has been balancing her disappointment at the decision by TNT to can the series, with pushing forward trying to get a season four on a new outlet!

In a new interview with Yahoo! TV, Cidre relates that she had a feeling that the show might not get-picked up due by TNT due to the executive shuffle and change in direction that the cable outlet was going: “At certain time you have a radar about the situation, and the fact that we had lost our two greatest champions, when (Turner Entertainment Networks president) Steve Koonin and (TNT head of programming) Michael Wright left, was not a good thing. And that it took so long (to make a decision about Dallas‘s future), and that they had so loudly announced the fact that they wanted to change the network completely… it didn’t bode well. It just took too long. When people love you, they tell youthey love you sooner than that. So, I had started to mourn the show (at TNT). By the time I actually got the phone call, it wasn’t a relief, but at least I didn’t live in limbo anymore. “

As to if Netflix, which fans have been suggesting, could be the new home for Dallas, Cidre  reveals that will not be in the cards:  “I wish that were the case, because that was absolutely everybody’s first thought, but unfortunately I don’t believe that our foreign deals allow that. A streaming service is not compatible with our foreign deals, unfortunately, because those deals are all very profitable, and the rest of the world loves Dallas. So I think we’re looking at cable. There’s CMT, there’s Reelz, there’s WGN, there are a lot of possibilities.”

So this begs the question: where do you think is the best cable TV fit for Dallas, to where it could succeed, knowing that Cidre has also revealed that she already has the bible written for the fourth season and could be ready to shoot within the next five weeks?  Weigh-in below!

Elizabeth Hendrickson Returns To Y&R On The Anniversary Of Delia's Death!

Just get it on a Network, ASAP

How about lifetime or spike tv

Just bring it back

Please bring Dallas back, it was a great show. I want to see what happens next!!!!!

I don’t care where it goes as long as it gets picked up by someone. One of the best shows out there.

Thanks for spreading the word Michael. #SaveDallas

Dallas is full of great talent.. the story is a classic go on..
TNT is run by men, nuff said….. and they seem to be a crazy to let Dallas go..

TV is full of junk programing… Dallas is needed !!
Any network that picks up Dallas will give their network some class and a show that is not junk.. (so tired of junk TV …
long live Dallas!!!

CBS should pick it up as a summer series.

Cynthia is a wonderful determined woman, I love her so much for not giving up. hopefully cmt or fox can pick up Dallas.

How about POP formerly known as TVGN—isn’t their parent company the same as CBS, which used to run Dallas when in was on network? It also runs Y&R, so it seems like a good fit for a soap like show– or perhaps that makes too much sense to work

I would think that tvgn is really not into putting new shows togetherlike dallas, I would luv to see if fox would pick it up,More people for whatever reason would seem to get more viewers, than tnt or tbs ever has with exception of a few. honestly I thought this past year was the best, they were hitting it stride. That really makes me sad that they are dropping dallas.

She is pinning her hope on CMT, Reelz, or WGN? I don’t see any of those networks (?) having the money necessary to produce a show as expensive as “Dallas. Do we really want the show back if the budget is going to be slashed substantially?

I’m rooting for them!!

Off the top of my head, I know that OWN is currently producing its own soap. That’s one possibility. Also, WHITE COLLAR is ending on the USA channel. Maybe they’d be open to gambling on a show with a built-in audience like DALLAS instead of trying to create a brand-new one. WC had the same number of shows every season as DALLAS; and they filmed on location in NYC. USA’s “Characters Welcome” mantra would certainly be accurate for DALLAS.

Please get it on a network, cmt, wgn, lifetime, oxygen…this is a great show and don’t want it to end! I loved original Dallas and was so happy it was revived 3 seasons ago. It’s as good now as it was back in the 80’s! Please do whatever it takes to get it back!

Please get Dallas back on TV soon, don’t care which network. CBS picking it up again is a great idea.

I wouldn’t mind a bit if CBS picked it up, and ordered more that 15 episodes. I like to see about 29 a season.

Add me to those who want the show back ASAP!

If it gets picked up, I hope the new network brings in better wtiters and has Christopher still alive.

I agree! I only want the show back if it has better writers. Christopher’s death was unnecessary but that is what you do when you lack creativity and actual writing talent. I love Dallas too much to see it destroyed by a bunch of idiots. Fire them so they can go ruin another show. Cidre needs to be let go as well.

I think CMT would be a perfect network for the show!

I hope Dallas finds a network that appreciates a good, well acted drama. And please bring Christopher back.

Agreed! I only want a fourth season if Christopher is alive!!!

We want our Dallas back please! It will make Dallas fans very happy

I would love to see CMT pick it up but any cable station would be great as long as we get Dallas back on the air…and not just for a 4th season….for many seasons to come !!
#SAVEDALLAS

Wahat is taking so long to get a Network . The FANS are going to have a WORLD WAR soon . #savedallas best show going . Please find a Network soon . I e-mailed Patrick, Josh & Linda but no word back from them . #savedallas PLEASE

We are french fan of your amazing new series DALLAS and we are so disappointed ta learn that the 4th season wont be done, it was so so great . Could we have hopening to see on day the followind adventures of the Ewing Family ?

ANYWHERE! JUST GET IN BACK ON THE AIR!!! BELIEVE ME DALLAS IS LOVED.