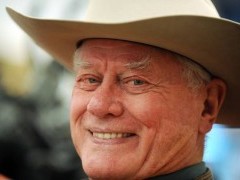 Once the beloved television icon Larry Hagman passed away back in November, the Dallas creative team was trying to decide how they were going to deal with the loss on-air of Hagman, and soaps number one all-time villain, J.R. Ewing!

While it has been announced that a momentous memorial service would play out on air, bringing many long time Dallas favorites and special guests back to the second season event, it was not yet  announced or determined how J.R. would be written-off.  However that all changed today, when according to TV Guide, part of this mystery has been solved, and well, the other part you will just have to see unfold as season two plays out with the aftermath of J.R leaving the canvas, which will have a huge impact on everyone and probably will put someone in the slammer!

SPOILER ALERT: According to TVG, that after Hagman’s passing: “Dallas executive producer Cynthia Cidre and the show’s writing staff went into overdrive reworking the second half of the season  The result: a multi-episode “Who Killed J.R.?” mystery that Cidre hopes will rival 1980’s wildly popular “Who Shot J.R.?” storyline.”

Cidre discussed the decision relating, “We all felt having J.R. die of natural causes would have been completely inappropriate, not only to the character, but also to Larry Hagman.”  Cidre also got story approval for their decision to “kill-off” J.R from Hagman’s long time friend, Patrick Duffy (Bobby) as well as Hagman’s son, Preston.

Don’t forget to circle your soap calendars that the new season of Dallas premieres next Monday night, January 28th at 9EST/8CST on TNT!

So soapers what do you think about another whodunit to honor the legacy of Hagman and J.R.? Let us know!

Reports That AMC & OLTL Reboots Will Be Telenovela Style NOT True!

Larry would probably love the idea that someone killed him. He loved drama!

great, looks like a good storyline to honor Mr. Hagman.

I like the idea. I know that Ted Shackelford was brought on before Hagmans death for a few episodes, I hope he sticks around for good. He’s great on Y&R, but not used nearly enough.

I think that is a BRILLIANT idea 🙂

I personally do think JR should have died of natural causes. there is too much gun violence i the news- much more so than when the Who Shot JR season was on. It’s just too much now. Larry Hagman did not look well at the end of the season and it would not be unusual for JR to have died. This is just my opinion- I will be loyal to this show.

No one said JR would die by gunshot.

No way, a murder mystery is fitting for JR!

So glad Dallas is back and I think this is a great way to send JR off. RIP Mr. Haggman.

That is a very smart creative writing idea. Very appropriate for this new DALLAS tv series and so glad the family of Larry Hagman have given approval. I think Larry would have liked it too. I’m surprised Mr. Hagman didn’t bring it up himself during an interview somewhere. I’m sure Mr. Hagman didn’t plan on leaving us so soon, but unfortunately cancer reacts very fast. Sometimes real-life imitates art. I believe the DALLAS team is using their best judgement. Please don’t give away the mystery and don’t tell who the killer is. Let us enjoy this last Who-done-it with respect… Read more »

JR was a lover as well as a fighter. He should have been seen with a wide variety of his mistresses that evening with no one wanting to admit that they were the one with whom he went on one last ride around the ranch so to speak. A whole new twist to “who” (or with whom he) “done it”

I agree with Lin that J.R. dying a violent death, particularly being shot, might not be the best course of action in this day and age, but it all depends on how well the storyline is executed. So far Cynthia Cidre has done a first-class job of keeping the new Dallas a classy affair, so I have faith she’ll make the right choices. I doubt, however, that a “Who Killed J.R.” story arc will have the same impact that “Who Shot J.R.?” had back in 1980. It was a different world, one in which cliffhanger endings and multi-episode story arcs… Read more »

From the sounds of it Shackleford and Van Arc will be around for awhile. Personally, I’d like to see a Knotts Landing reboot, but having Gary and Val back here is a good start.

Fantastic! I agree Larry would have loved the drama of a “who-dunnit.”

I love it, perfect end to one of televisions best characters!

The best ending for JR would have been for him to know he was dying, but not tell anyone, then frame Cliff Barnes for murder by staging a fight with on a rooftop and falling off it thereby making it look like Cliff did it. However- since the writers did not have the opportunity to have Larry around to film those scenes, this ending seems the most fitting. The whole season ending cliffhanger for prime time was invented by Dallas with that classic episode of who shot JR. I think Larry would have loved knowing that even in death JR… Read more »

the first “Who shot JR” story-line was legendary…I remember it so well!!! this is only fitting for a timeless character and for Mr. Larry Hagman..rest in peace..

I think its a great way to show tribute.

I just like this whodunit idea. Just can’ t wait for this.

I can see J.R. killing himself with someone else’s meds….and that “someone else’s” fingerprints all over the pill bottle. Especially if those same fingerprints were on J.R.’s decanter. It’s like ancient Rome, by way of Texas..