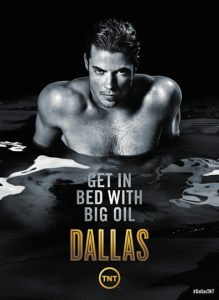 Dallas season three is on its way premiering on Monday night, February 24th at 9PMEST, and as a preview TNT has released this official set-up of the new season and what to look for, plus a preview of the  season three premiere!

In story, Dallas stars Patrick Duffy as Bobby Ewing, who is now the senior member of the Ewing family, following the death of his older brother, J.R. Ewing. Linda Gray stars as Sue Ellen Ewing, J.R.’s former wife and the mother of his son, John Ross III (Josh Henderson). Following the death of his revered father, John Ross is out to prove he can be just as powerful an ally or enemy as the infamous J.R., and Sue Ellen is ready to help him any way she can.

Christopher (Jesse Metcalfe), Bobby’s adopted son, is still determined to make a name for himself and his family; but he continues to reel after his engagement to Elena Ramos (Jordana Brewster) fell through, and the search for his mother ended with news that she died in 1989. Elena, having received important information about the original deed to her father’s land, is now consumed with thoughts of justice for previous wrongs against her family, including her brother, Drew (Kuno Becker), and mother, Carmen (Marlene Forte), the Southfork Ranch housekeeper. To find that justice, Elena has turned to an old childhood friend, Nicolas Treviño, played by new cast member Juan Pablo Di Pace, who most recently starred in the series Camp.

The Ewings’ chief nemesis, Cliff Barnes (Ken Kercheval), has done everything he can to bring the Ewing family down. But when an attempt to sabotage a Ewing oil rig resulted in injuring his daughter, Pamela Barnes (Julie Gonzalo), and killing her and Christopher’s unborn twins, Cliff suddenly found his daughter turning against him. Having helped the Ewings gain a controlling interest in Barnes Global, Pamela is now determined to find a happy ending with her new husband, John Ross, and make a home for herself on Southfork Ranch. Cliff, meanwhile, awaits trial for the murder of J.R., of which he has been accused.

Bobby’s wife, Ann (Brenda Strong), continues to battle with Harris Ryland (Mitch Pileggi), her scheming ex-husband who is now in jail for drug smuggling. Ann also continues to build a relationship with her daughter, Emma (Emma Bell), a sheltered beauty who has teamed up with John Ross to stir up trouble for her father, Harris. Things become even more difficult for Ann with the return of Harris’ controlling mother, Judith (Judith Light).

The third season of Dallas will introduce viewers to Heather, a 20-something ranch hand and single mother, played by AnnaLynne McCord, who was recently seen as Naomi Clark on 90210. When Heather’s ex-husband returns, bringing turmoil back into her life and the life of her 5-year-old son, Christopher steps in to help.

Now on the February 24th the episode aptly titled, “The Return”, TNT previews,  “Season 3 kicks off with the Ewings on top, having vanquished Cliff Barnes (guest star Ken Kercheval) and taken over his company. The Ewings are united, with Sue Ellen planning a wedding for John Ross and Pamela. But solidarity among them can only last for so long. John Ross quickly gets into conflict with Bobby over their joint ownership of Southfork Ranch, while also putting his marriage at risk as he enters into an illicit liaison with Emma. Meanwhile, Christopher’s relationship with Elena seems irreparable as Elena returns to Dallas with her own secret agenda for justice. As the betrayals mount, the arrival of a mysterious stranger puts everyone’s plans at risk. ”

So what are you looking forward to most in season three when Dallas returns in just a few weeks? Let us know!

DAYS Deidre Hall On Guy Wilson Taking Over The Role Of Will Horton: "He deserves our energy and appreciation and he has mine completely!"

Can’t wait to see what happens on Dallas with all the new story lines and the new cast members,it sounds very exciting.

There really IS a dynamic between John Ross and Christopher

the Dallas casting really scored with these two actors… they feed of off each other so well…. it’s OK to say it’s reminiscent of JR and Bobby

hey… this is a new era

I’m so impressed that this is season 3

Huge fan of the original Dallas! I love this one just as much. Maybe more!! Looking forward to whatever John Ross is up to. He’s just like JR! What a great character !! Great show!

Love this show! Looking forward to its return.

Two great primetime soaps ~~ Dallas and Downton Abbey. Both extraordinary in their own way. Dallas, which I L O V E for its power, schemes, lust and memories. I just want to see Larry Hagman’s dream carried on and continue to be a hit. More action, lust and conniving with some occasional family caring in it (so we know they are still human). Oh and some special appearances from some of the old cast once in awhile. Love Dallas!

Cliff…even if he goes to prison or not…did not kill J.R…J.R. knew he was dieing and had it set up to look as if he had been murdered just to frame Cliff…J.R. had to pull one last scheme…imo!!!

Well that isn’t an opinion that was last year’s final show– J.R’s master plan– J.R. had his friend Bum steal Cliff’s gun and his friend killed him with it. – Bobby and the John Ross followed through on the master plan and planted the rest of the evidence to frame Cliff– and they fill in Christopher at the grave site near the end of the finale last season– saying the only one who could take down JR was JR himself– is any of this ringing any bells? I know you have some memory problems, so just letting you know where… Read more »

I kinda remember that(but i just couldnt recall how the show ended exactly) I shouldve went back and reread old posts…thats what my doctor told me one of the things to do to help me with my memory lapses but im glad you reminded me…thanks!!!

“In story, Dallas stars Patrick Duffy as Bobby Ewing, who is now the senior member of the Ewing family, following the death of his older brother, J.R. Ewing.”

Well, I know this is obviously a reference to contract players, but both Gary and Ray are older than Bobby. LOL

I didn’t watch Season 2 of the show. Does anyone know where I can watch those episodes short of buying the DVD?

They are streaming on Netflix now!!

Looking forward to the return of DALLAS.