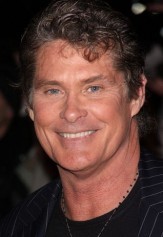 David Hasselhoff discusses with MSN’s, Deanna Barnert his return to The Young and the Restless for a special series of episode airing next week, that centers around his on-screen momma, Liz Foster (played by Juliana McCarthy), who has been taken ill.  Hasselhoff will be seen reunited on-screen with Wings Hauser(Greg) and Jeanne Cooper (Katherine), as well as working with Jess Walton (Jill). Note: Brenda Dickson was Jill when Hasselhoff was Snapper on Y&R.

The infamous Hasselhoff opens up about his bad acting in his early days of daytime drama! “For the first two years, it was a rough time for me. I was replacing William Gray Espy and everyone loved him. I got a ton of hate mail. I remember reading one letter that said, ‘Every time you act, I want to regurgitate and climb the walls.’ I said, ‘You better climb the walls, ’cause I’m sticking around.’ I remember writing this person back, going, ‘This is horrible. I’m hated.’

“I turned it around, because Jeanne put me under her wing. She took me home and helped me find Snapper. She called Bill Bell and said, “Let him be emotional. Let him be different than William Gray Espy,’ who is very cool. It was a big shock to everybody. With the help of her and this book that I still believe in, ‘The Power of your Subconscious Mind,’ I turned it around.  Tell the fans I said, ‘Thank you’ and ‘Stay tuned. You’re going to love the shows. You are guaranteed to cry. The crying Hasselhoff has returned.'”

READ MORE
ABC and PEOPLE's 'The Story of Soaps': What Was Your Review Of It?
Continue Reading