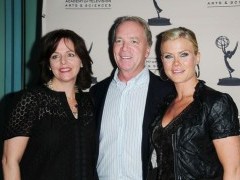 Entertainment Weekly has a new online interview with Days of our Lives, executive producer, Ken Corday. In it, Salem’s head honcho discusses the show’s just announced two year renewal from NBC, the changes the series has had to make over the last few years, favorite storylines and many quotes about his cast.   Below are a few excerpts that we found interesting.  Make sure to check out the entire feature with Corday!

Corday on if there is a long term future for the dwindling soap industry: “There’s a three-point answer. One, you have to at times economically branch out how you do the show. So we are now doing seven shows in five days, sometimes eight shows. That saves us a lot of money. Second, I think the time will come in the next two to five years where you will see one soap on each network—only the strongest will survive. And the third and most important, you can quote this. [Former head of NBC] Jeff Zucker and I spoke sometime in mid-July when we were renegotiating, and I said, “Jeff, you’re still the boss and it’s going to end up in your lap, what do you think?” And he said, “Ken, I’d love to see the show hit 50. It’s amazing that it has hit 45.” It’s the longest running dramatic show on NBC, but 50 would be very precedential. So I say the glass is half full if not more, but you can’t ignore the fact that there are so many alternatives.

Corday on hiring former Passions stars, Galen Gering, Eric Martsolf and Lindsay Korman, and if it was an NBC mandate to pick them up for roles on DAYS: Definitely not.  Galen Gering especially came over playing completely different roles then he did on Passions. You won’t see him in the same dynamic in his portrayal as you saw on that show. Two of the others that came, Eric Martsolf and Lindsay Hartley—Eric he is somewhat similar to the character he played over there, and Lindsay has come to the show and will be leaving the show, so no, it wasn’t conscientiously, Let’s go get Passions actors and put them on the show. There’s just good talent available. That’s all.

Corday on how the powers-that-be keep Alison Sweeney’s, Sami Brady still vibrant and interesting after all these years: “Good example that you picked, because Allison is a very driven person. We often have quarterly conversations—she and I alone—where we talk about her character and how her character can grow. Not just continue to do the idiotic or Sami’s-her-own-worst-enemy stories. But, you know, character growth. Can she ever grow up to be anything but her own worst enemy? And the answer is: Oh, yes. She takes five steps forward, but then takes one massive step back. She commits basically homicide today and tomorrow. We talk about this a lot. But you have to have character growth and character development—either growing up or down, sideways whatever, so the viewer doesn’t say, “Oh, I know where this is going to end up. I’ve seen him or her do this before.”

Ted King heads to One Life to Live!

Ken Corday is worst producer and he has worst writers on the show and he is purposely not showing our favorite character Jack and having pimp that loser Daniel to his shrew Jennifer. I really think that Matthew Ashford made big mistake signing for this crap show they do not value his talents or giving him a decent storyline away from that horny Jennifer who cannot keep her panties on. Jack deserves better than Jennifer I want him away from her. I think good punishment Jennifer is for her to be miserable with Daniel realize he is not stable or… Read more »