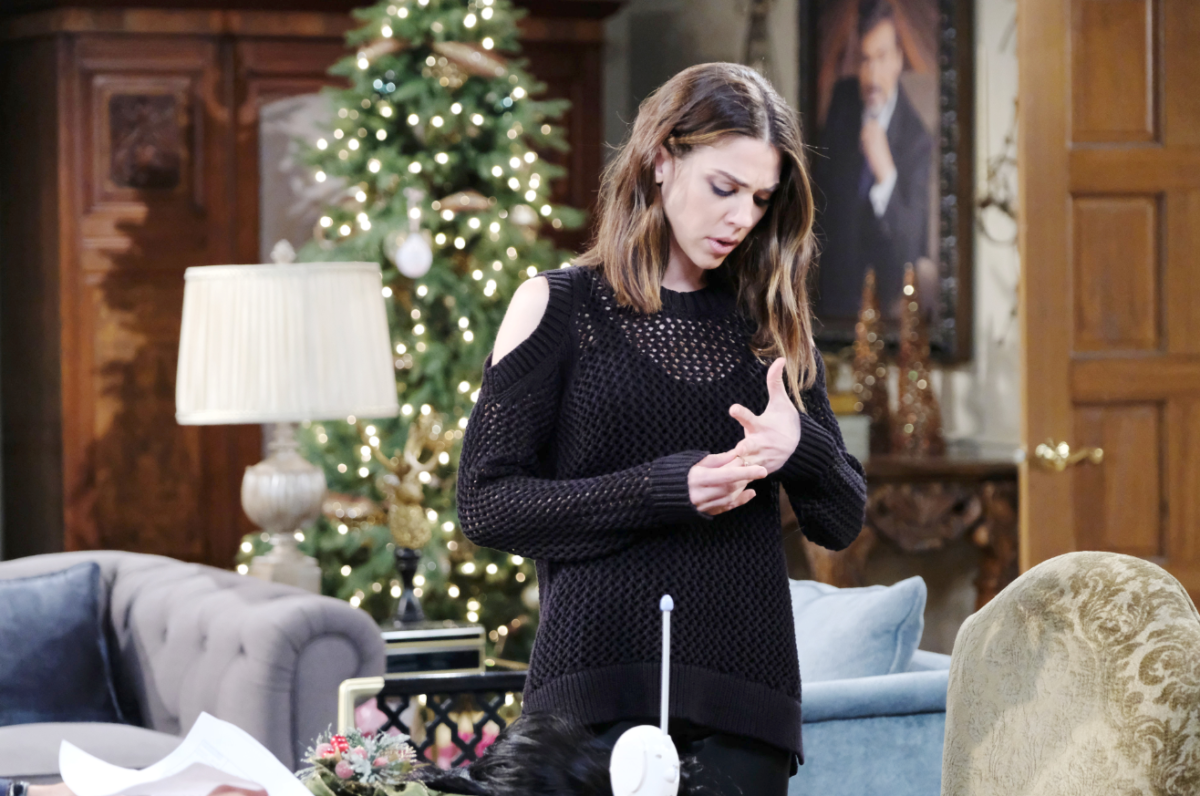 This week was a whirlwind for the character of Abigail Deveraux (Kate Mansi) on Days of our Lives.  On Christmas Eve, she shows up at the annual Christmas Ornament hanging at the Hortons with her daughter, Charlotte in tow.  When she gets there, she has a few choice words for her mother, Jennifer (Melissa Reeves).

A hurt and angered Abby lets her mom have it for not believing in her sanity in a gut-wrenching moment played to perfection by Kate Mansi.  Coming in to the scene like a firecracker ready to explode, she let out the emotions of how her own family would not stand by her when she was being gas-lighted by Gabi (Camila Banus), and yet even with that, no one still believed her.  (She still had no hard evidence to proof that she was telling the truth, but that was just around the corner!)

In addition, Mansi was pretending to be “Gabby” with a Y, the alter that fell for Stefan (Tyler Christopher) in an effort to get her freedom, and she did it.  She hands the guy divorce papers as a Christmas present, throws off her wig, shocking him that he was the one being played.   She is not sick.  She is herself, Abigail and she is leaving him and taking their baby with her. 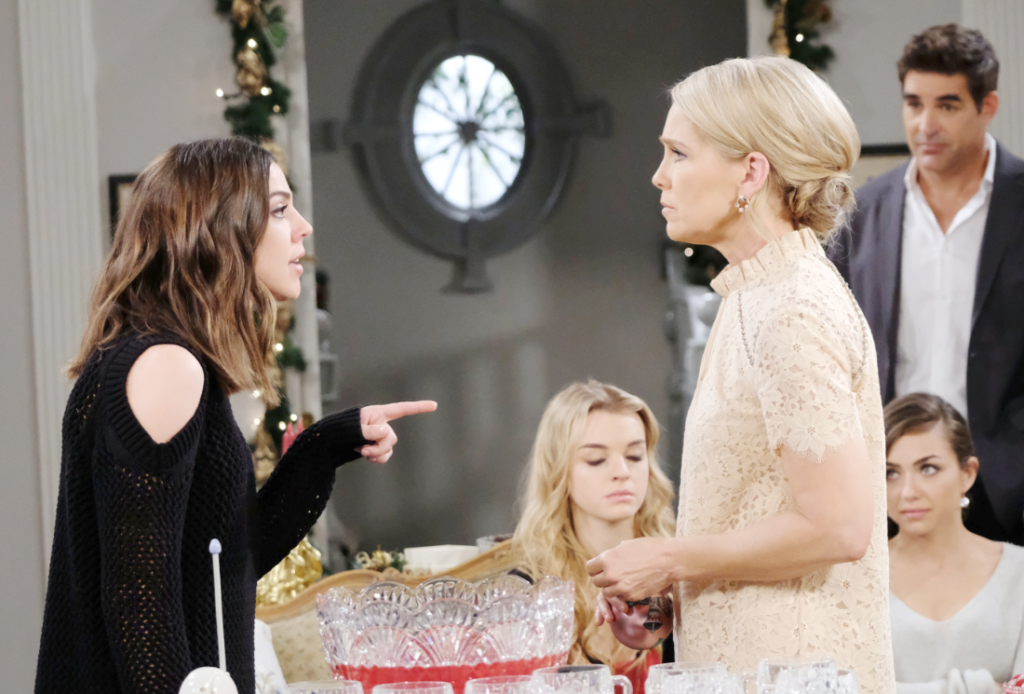 Later, when Julie (Susan Seaforth Hayes) remembers that she saw the DNA results proving that Chad (Billy Flynn) is the father of Charlotte, not Stefan, it is a triumphant moment for Abigail, yet a stinger, because she realizes the lengths her supposed “friend” Gabi went to for her revenge plot against her.  Eventually, Abby reunites Charlotte with her real bio-dad, Chad.  And for good measure, after the truth is finally out, and Abigail proves that she is of sound mind and body, she clocks Gabi for her deception right in front of Chad. 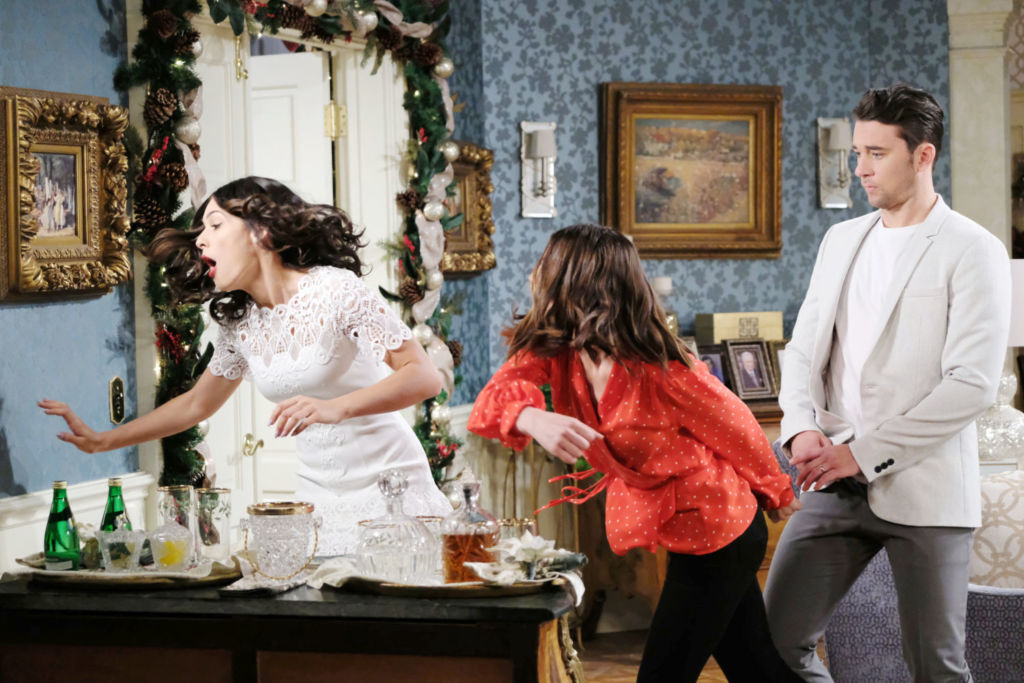 With the levels of emotion illustrating the character’s inner-strength, and the depth in her work, MFTV names Kate Mansi the last week of 2018’s, “Power Performance of the Week.”

Let us know what you thought of Kate’s performance, what was your favorite moment in it, and how the week unraveled for Abby, Gsbi, Stefan, Chad, Jennifer, and Julie in the comment section below.

GENERAL HOSPITAL: New Year’s Eve Brings With It Murder And Plenty Of Smooches

Kate Mansi is just as good as Marci Miller if not better for a soap, just different. I am a newish viewer of the show and only saw Kate’s original run in small does. She always stood out to me and still has that “it” soap factor to me.

off the charts – can we say Splash, Snap, Lets Dance Kassie DePaiva “dropped” Gorgeous ! My Lady Love is back My lady love Eve is such a power player ! Eve and Rafe !!!! hello ? any takers ? I will never think Eve and Brady have run their course… yet knowing just how strong Kassie DePaiva and A Martinez stratosphere.. WOAH NOW… we have a true stir and plot thicken. since … as I’ve read … Jack has no memory.. and since Jennifer and Eve “dance”… this is the perfect foible. Jack and Eve truly do love one… Read more »

You bet, Patrick…..Kassie is IT–and Kate. Oh, my Lord….just caught up!! I am in seventh heaven with these two! Yeeeessss!! And, I can definitely see Eve with Rafe—–anyone other than Hope. I even preferred him with Kate ( Lauren Koslow). I don’t know about Hack and Eve, though…..sort of disgusting. You know? She seduced JJ—-he was a kid. Eve is a seductress. Jack and Jenny ( as much as I am not a fan, belong together. Jack needs to remember so that he can make a choice, if he is to remain in Salem. The same goes for Justin, Patrick.… Read more »

I am disappointed that Marci did not get to deliver those lines.

Bobbie, I am disappointed that Abby will not make Gabi pay for everything she has done to her and her marriage and family. What a big letdown, after all these terrible stressful months.

I like Kate however a friend of mine and myself miss Marci. I am so glad though that Gabby got hers. I hope she rots in hell. Nice job Kate with letting Gabby have it. Everyone thinks just because Abby has a mental illness she is weak, far from it. Having a mental illness is no picnic believe me I should know.I live with four of them. People need to realize just because someone has a mental illness doesnt make them crazy or dangerous.It seems to me the one who is dangerous here is Gabby.I know she is out for… Read more »

Are u giving up technology in June? (not meant to be nosey)

Kate Mansi did a masterful job with those scenes. The look of satisfaction and her vocal tone when Abby revealed to Stefan that he had been played were just wonderful. During the confrontation with her mother, you felt Abby’s rage, hurt and betrayal. The final showdown with Gabi was terrific. I loved when Abby belted her. Throughout each scene, Kate was great portraying Abby’s anger, sense of betrayal, and inner strength. Hats off to her and to Billy Flynn, Camila Banus and Tyler Christopher.

Days fans have been so lucky this year to be treated to two exceptional actresses both in the role of Abigail
Kate was on fire and brought the backbone to the character while Marci was more soulful and tender. While Kate excels during her confrontations with Gabbi and Stefan , I do wish Marci could ve been portraying during the reveal to Chad. Just saying!…
But what a problem to have! Lol.
Love Chabby and Kate hasnt missed a beat while away!

Right, Damien….I had almost forgotten how superlative Kate Mansi truly is. She gave it the old one-two punch!!
I had gotten used to Marci, after a very long period of time. However, I’d be lying if I were not happy Kate’s back!! Yeayyyy!!

I loved what Marci brought to the role of Abigail and enjoyed her time on the show immensely. But despite my reservations about having Kate return to the role (I enjoyed her as well, but she and Marci have different acting styles), I am actually enjoying the hell out of her return. I think a lot of it has to do with the history between those two characters and actresses, and Kate does know how to bring a certain soap opera touch to Abigail, whereas Marci was much more reality grounded. Truth is, I love both of their portrayals for… Read more »

kate mansi did a great job

Tyler Christopher was my power performance of the week.

I was totally invested in Marci Miller’s Abigail but find Kate Mansi very cold and unsympathetic in the role.

Kate Mansi definitely deserves this title, she owned last week! Gabi serving Stefan divorce papers and delivering that line ending in “you son of a bitch” perfectly to letting Gabi, Chad her and her mother have it!

Her scenes with her father, Jack today were really great also.

I was finally getting used to Marci, except for her wardrobe, and now Kate is back, so I am trying to remember how much I liked her as Abby. I am so glad she is keeping Chad at arm’s length for now. He was a real jerk through this whole SL.