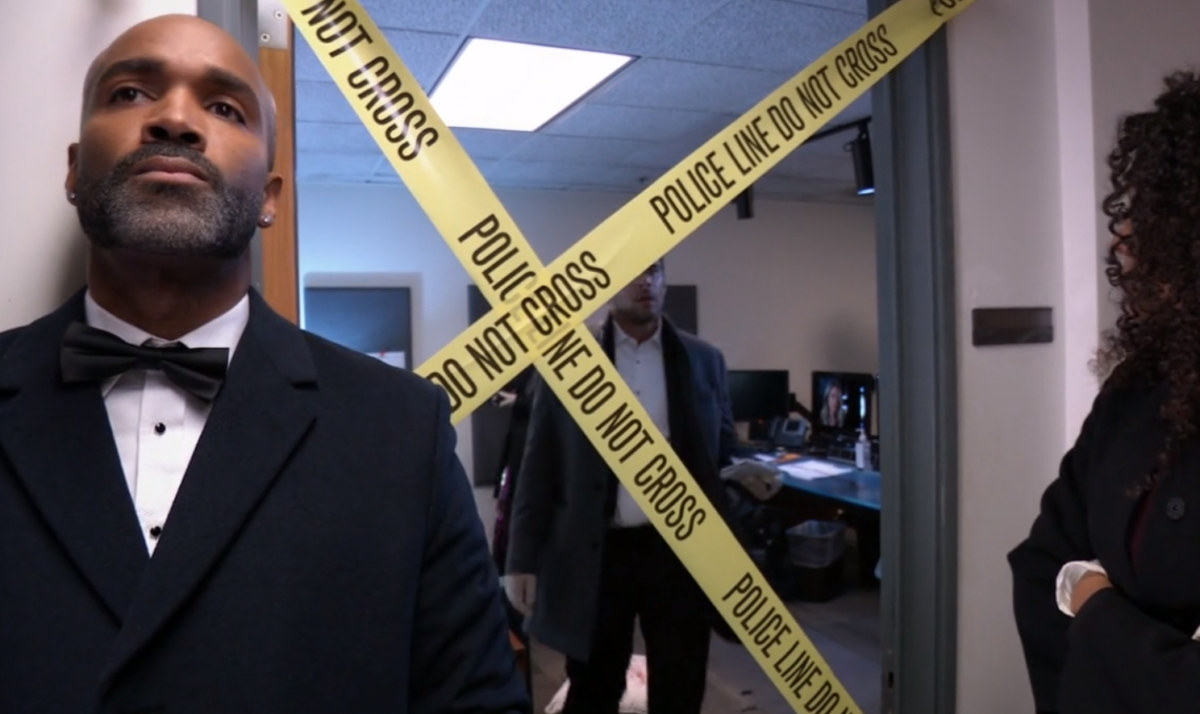 Port Charles rings in 2019 with a night of celebration, love in the air, and a serial killer striking again.  Many residents are gathering at the Metro Court for the New Year’s Eve party hosted by Ned (Wally Kurth) and Olivia (Lisa LoCicero) that benefits pediatric cancer research.

Meanwhile, Ryan (Jon Lindstrom) is heading over to the producer’s studio and edit bay where Peyton has been working on the documentary about the serial killer.  Previously, after Peyton had made mention that Ryan could be alive, because he visited the site where Ryan died and no DNA was ever found. Ryan clearly wants to shut him up for good and alter the footage.  We see Ryan with rubber gloves going into the bay, and later checking Peyton’s phone to see who might be looking for him.

Curtis (Donnell Turner) is heading over to meet Peyton. and promises Jordan (Briana Nicole Henry) he will meet her at the NYE party by midnight, after getting a text to move up their get-together from tomorrow to now! When Curtis arrives on the scene, he opens the edit bay door, and finds blood splattered everywhere, but no body.  He calls Jordan to tell her there is a crime scene and to meet him. 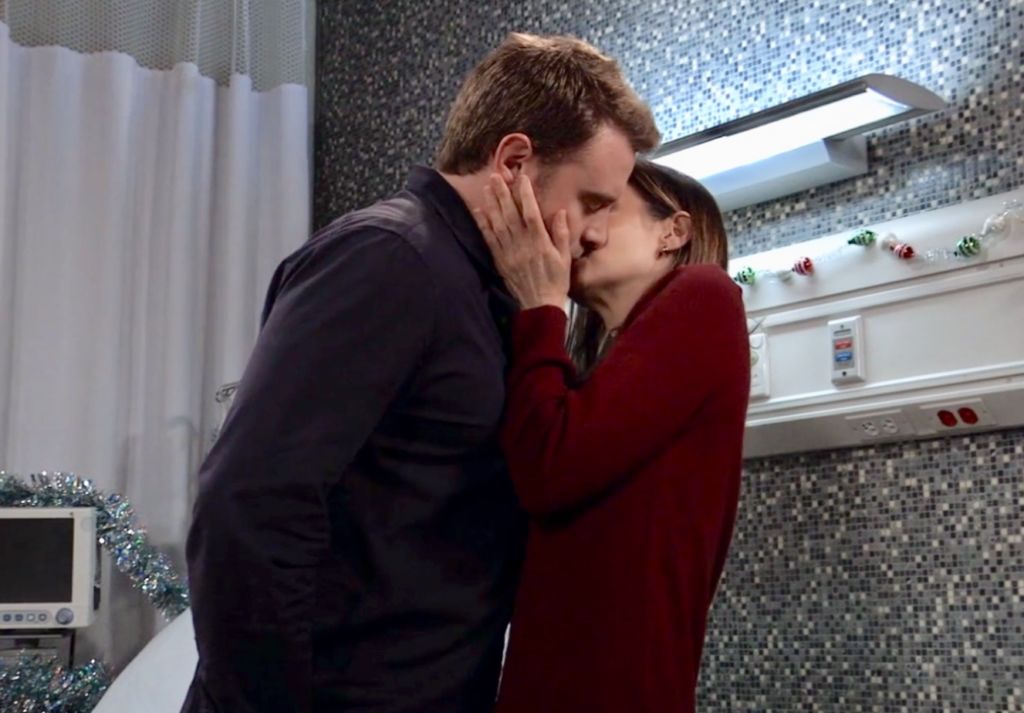 At the hospital, Drew (Billy Miller) and Kim (Tamara Braun) share a tender moment, when Kim recounts that New Year’s Eve was when Oscar was conceived, and how she decided to be a single mom, but it was apparent how much she loved Drew, although he has no recollection of it.  However, in the moment the two share a kiss which is witnessed by Julian (William deVry) who has returned from the Metro Court party to be with Kim to welcome in 2019.  He sees Drew and Kim kissing through the window and hightails it back to the Metro Court.  Will he end up in a smooch with Alexis (Nancy Lee Grahn)? 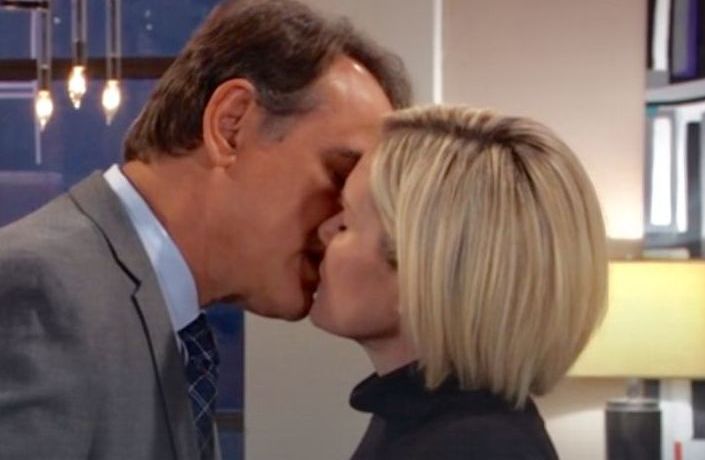 Ava (Maura West) is at her place lamenting over Kiki’s old New Year’s resolution and grieving her daughter.  Ryan shows up vowing to not let anyone hurt Ava, and if they do they will have to contend with him.  The two share a kiss.  When will Ava realize she is cozying up with her daughter’s killer?

Inside the party, Michael (Chad Duell) is smitten with Willow (Katelyn MacMullen),  while Willow shared a kiss with Chase (Josh Swickard), and Kristina (Lexi Ainsworth) and Valerie (Brytni Sarpy) have an awkward moment between them, while Scott (Kin Shriner) and Laura (Genie Francis) chat it up about how “Kevin” is sleeping with Ava. 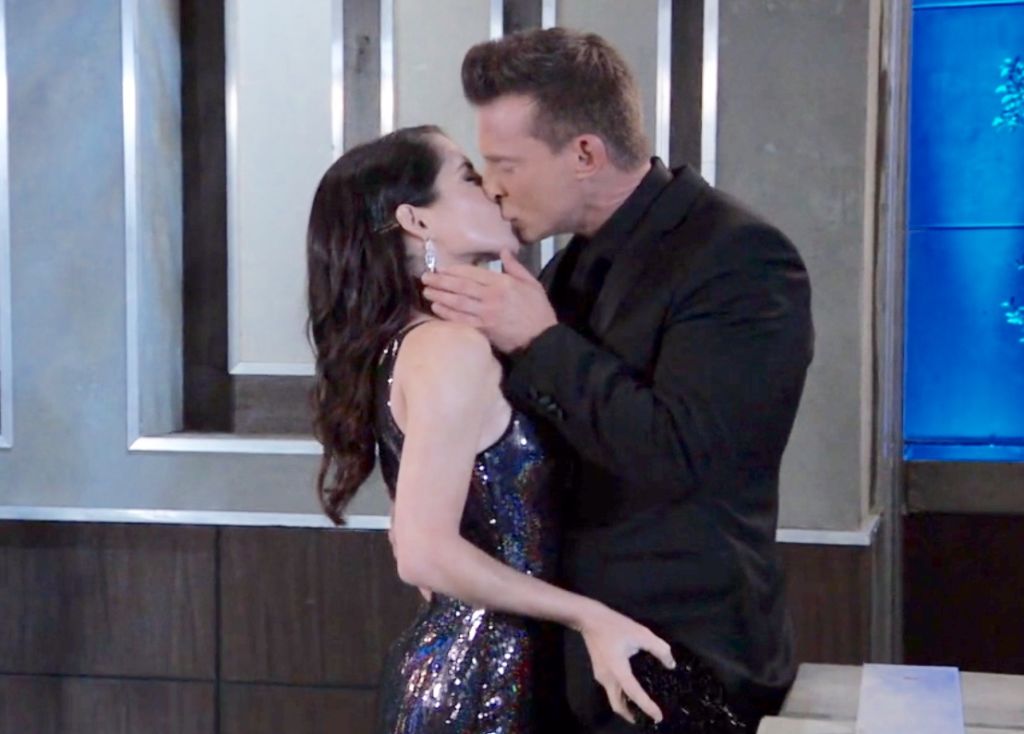 On the balcony of the Metro Court, Jason (Steve Burton) and Sam (Kelly Monaco) share a moment and a kiss to ring in the New Year.  However, Jason notices something off about the plastic snowman placed behind them, and sees some blood.  When he kicks it over, Peyton falls out dead.

So, as 2019 begins, which duo’s are you rooting for to be together?  Who will be next on Ryan’s murderous spree?  Share your thoughts via the comment section below.

DAYS’ Kate Mansi Delivers The ‘Power Performance Of The Week’

An actor looks at the script, remembers his/her lines and delivers those lines. Jon Lindstrom makes his lines crackle and spark and he does it without resorting to mugging it up. His art is subtle and the result is powerful. Watching Ryan pretend to be Kevin is fascinating. Jon Lindstrom is the most talented actor on daytime period. This is why he’s getting so much work on the big screen, on Amazon. GH is lucky to have him.

Sasha is Nina’s sister…Daisy is Sam’s daughter…no dna found at murder scene?…Ava pregnant by Ryan…Val obviously gay…Chase the only cop-so commisioner Jordan has to be called when he too busy with Willow…Micheal also likes Willow…Willow Nina’s daughter…Nina and Willow dislike each other…Willow’s baby died but thinks her child is with Brad and Lucas but baby really is Nelles and Micheals…Mike has many forgetful moments due to his Alzsheimer and sometimes forgets Sonny is his son but never forgets Yvonne’s name…Jordans husband Curtis is really the son of his aunt stella who had an affair with Yvonnes husband Marcus…too many long… Read more »

Jimh, kudos to you, and Happy New Year! You have hit every nail, soundly on it’s head! Please explain why you think Sasha is Nina’s sister and Willow her daughter.I guess because Nina doesn’t think Charlotte is perfect, the way she does. I have always believed that Curtis is Stella’s son, but Marcus doesn’t seem to have as fond memories as Stella does. It is funny how Mike remembers Yvonne and Stella’s names. He likes his ladies. Now, tell us who the next victim is.

Carly will be next but survives…Maxi could be one-Peter will rescue her but gets stabbed himself…Peter will survive but its Maxi who wills him to live when she realizes she loves him and tells him so-BIG SNOOZE alert here!!!

OK. Guess that’s as good a reason as any.

After waiting this long, who cares anymore?

Anyone know the song on the closing credits today?