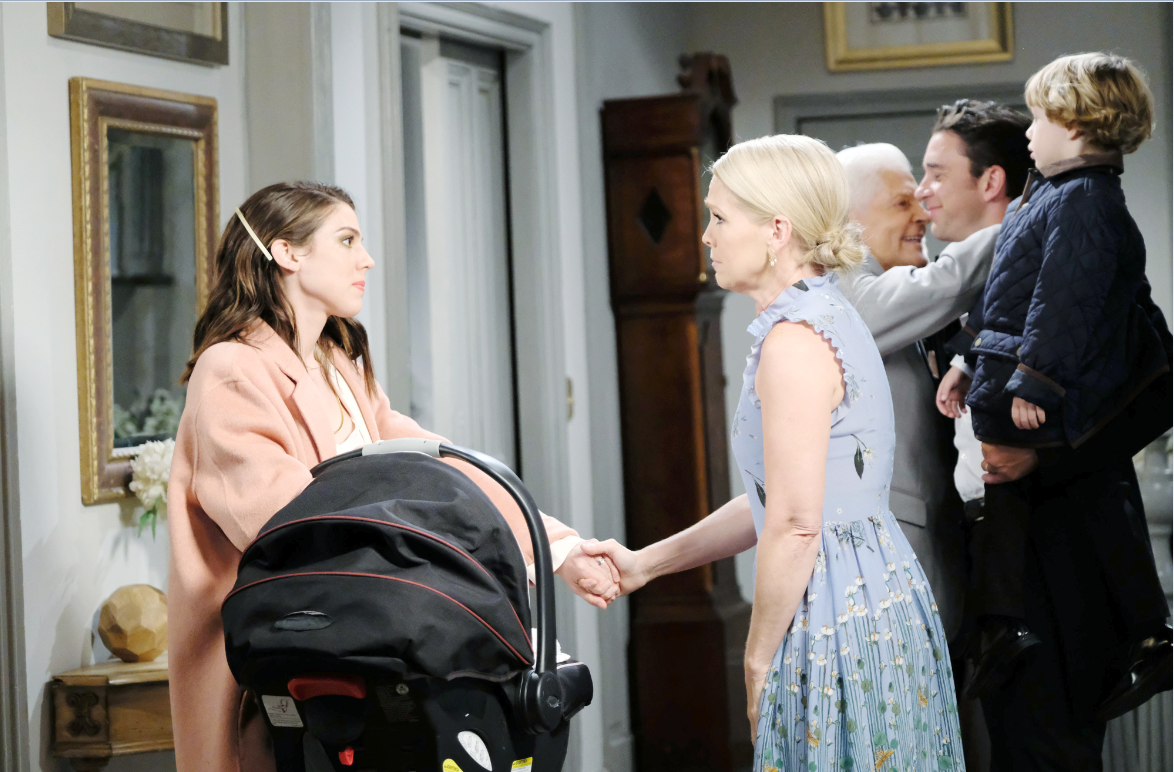 On Thursday’s episode of NBC’s Days of our Lives, tears were shed not only by the characters on the screen, but by the audience at home … plenty of them if you have been checking out social media since this installment aired.  For in it, viewers had to say goodbye to Chad (Billy Flynn) and Abby (Kate Mansi) as they left Salem to start their new life with their children in Paris.

However, before they make their exit, Chabby fans finally get to see their favorite duo tie the knot in a heartfelt and touching ceremony right in the Horton family living room.  While it was spur of the moment, it could not have been more poignant.  Leave it to Julie (Susan Seaforth Hayes) to officially preside over the nuptials, JJ (Casey Moss) to play his guitar while his sister walked down the living room aisle to her man, and even Jack (Matt Ashford) showed up to do the right thing to be there for his daughter.

What would a Chabby wedding be without personally written vows, right?  Abigail tells Chad: “When we first fell in love, God, we had no idea of what we were getting ourselves into.  They say that when you meet someone and fall in love, you’re drawn to them, because they have something you need and we’re here today because I need you.  I need your courage, your faith, and love.  I’m so beyond grateful at a second chance with you and a family with our beautiful children. You are the love of my life, Chad. There’s nothing I want more than to spend the rest of my days with you.” 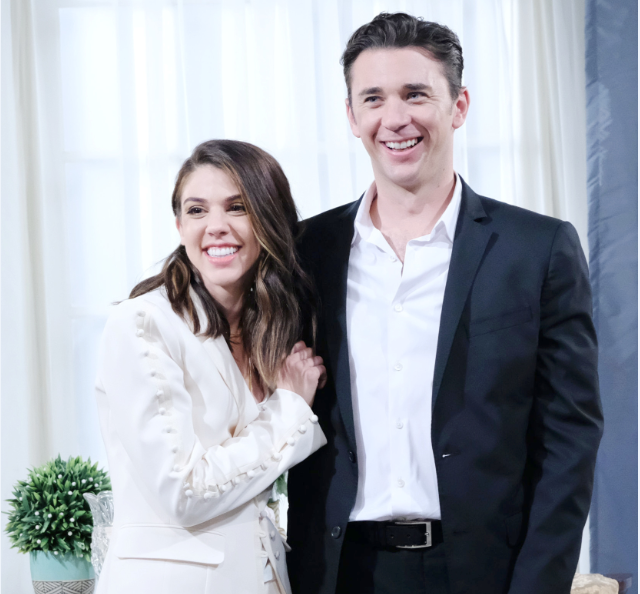 In a touching moment, Chad is overcome with tears and expresses to Abigail; “You’ve always fought for your health, and for us, and I’m in awe of the woman I fell in love with. I’ll cherish you. I will protect you. I’m yours, and I’ll never doubt you again, because a love like ours really does only come once in a life.”

They exchange rings and Julie pronounces them husband and wife.  But this happy moment is also bittersweet when Chad says, “We hate to marry and run.”  Chabby has a plane to catch to take them to Paris.   Chad looks around the room and at all the special people in his life, and tells the group how special they all are to him.  In that scene, it definitely gave the feels that it was also Billy Flynn saying farewell to his castmates.

Of course … before they leave town Chad and Abby visit Stefan (Tyler Christopher) and Gabi(Camila Banus)is there.  They give them the news that they are leaving for France and are married.  In a moment alone between Abby and Stefan, he apologizes to her. Stefan notes how much he loved the other part of her (Gabby with a “Y”) and knows that she loved him too.  Abby says, “I know”.  Meanwhile, Chad says goodbye to the portrait of his father, Stefano vowing to be back someday.  After Chabby exit the DiMera mansion, Stefan has a meltdown and throws the chest board while Chloe (Nadia Bjorlin) walks in on the scene. 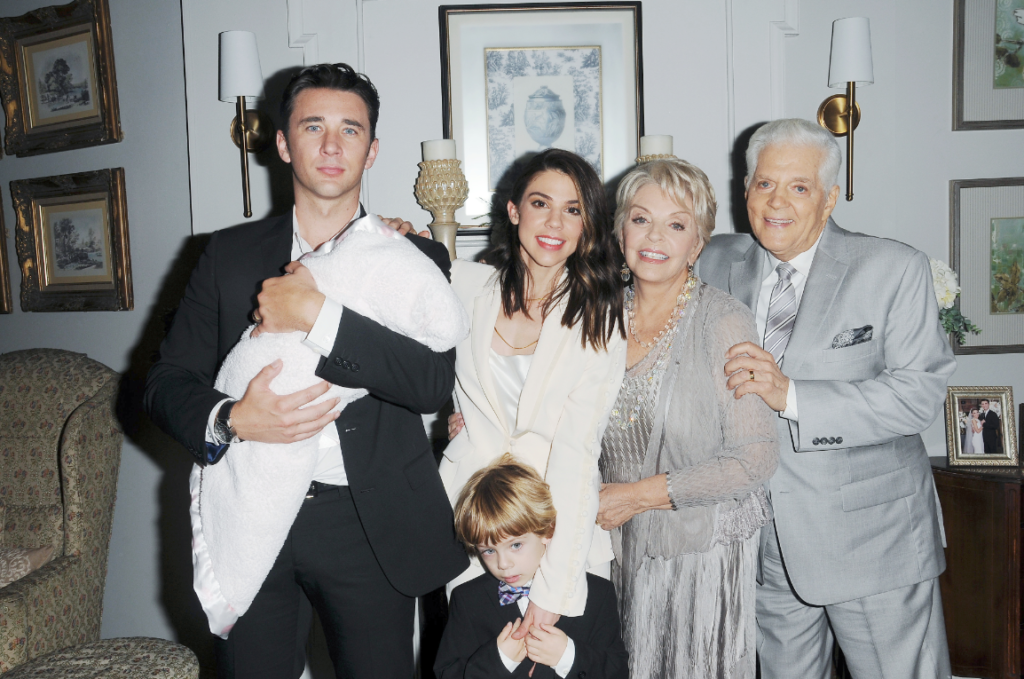 And finally, in the 10-hankie moment beautifully played by Billy Flynn, Kate Mansi and Melissa Reeves (Jennifer), Chad and Abby at the Horton house to say their final goodbyes to Doug (Bill Hayes) and Julie, Jack, JJ, and Jennifer.  Abigail tells her mother to never give up on her dad.  Chad is in tears as Jennifer tells him she will miss him,  He says, “I will miss you, too”.

It was in that moment that any of us that have ever had to say goodbye to our families and move far away from them, or come back to visit them and then leave again, can relate.  Saying goodbye is often heartbreaking when you leave behind the ones you love.  But, Chad and Abby got their happy ending … for now. However,t his is a soap opera, so you never know how long happiness will last, or when they might be back in Salem.

Kudos to the performances of Billy Flynn, so raw and real, and Kate Mansi playing Abigail with depth and dignity to wrap up the story.

So, what did you think of the Chabby goodbye? Share your thoughts via the comment section below.

This Is Your Life Nikki Newman! What Did You Think Of Melody Thomas Scott’s 40th Anniversary Y&R Standalone Episode?

THIS WEEK: Billy Flynn and Kate Mansi Exit DAYS As Chabby Says Their “I Do’s” In Heart-tugging Moments

I have loved Kate Mansi more than any character since Alison Sweeney left the show. It was a heartfelt show, made you feel nostalgic. I love Susan Seaforth and always look forward to seeing her on screen. It made it that much more poignant to have her marry Chad and Abigail, much like Marlena married Will and Sonny. I think it would have been better to have a few more family members there, especially Maggie and Hope. I loved Abigail’s scenes with Stefan, but it left me wanting more. It would have also been nice for the goodbyes not to… Read more »

It was an enjoyable show. Billy Flynn will be missed. He’s definitely one of DAYS biggest assets. I loved having Kate Mansi back as Abagail. Marcy Miller left me a little cold in her character. DAYS has some big shoes to fill in this gap.

I wish I could say I will miss them but their storyline has come to an end and it’s time to focus on new stories and new romances.

Loved him so much… A newbie TORE

he deserves to
what an enigmatic actor
strong

that’s all that needs to be said

I fell in love… what a thing

i can’t believe that newbie excited this much…

they gave me dance

they gave me SEX

Billy Flynn, you are the man, you seared your soul

YOU dance
YOU real
YOU YOU

Billy Flynn I LOVE YoU