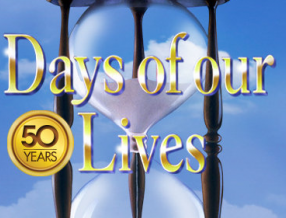 Days of our Lives is set to be honored at this year’s Hollywood Christmas Parade taking place on Sunday, November 30th!

As the soap kicks off its 50th year next year, current cast members will be on hand to participate in a special presentation to commemorate its enduring run on NBC.

Plans call for the DAYS to make their way down the parade route in an eye-catching presentation, featuring the show’s new 50th anniversary logo! There, the Salemites will then be greeted by parade hosts, Laura McKenzie and Erik Estrada, and presented a special honor to acknowledge their success!

DAYS Co-EP Greg Meng stated on the honor: “What better way to start the countdown to Days of Our Lives’ 50th anniversary on NBC than to be part of the iconic Hollywood Christmas Parade? We look forward to celebrating this holiday season with viewers across the country!”

Jim Romanovich, President of Worldwide Media for Associated Television International, added, “Days of Our Lives is an incredible success story and has been such an influential show to audiences over the years. It is, and continues to be, the cornerstone of NBC daytime programming. As fans of the show, we are thrilled to give them the tribute they deserve in this prestigious event.”

What do you think about DAYS being honored at the big parade?  Comment below!

The Young and the Restless Delivers Largest Weekly Audience Since March!

That is wonderful. Congrats to them !

Awesome. Wish I could be there. I’ll try to catch on TV, but the airings aren’t real convenient.

That’s nice. I wish that ALL MY CHILDREN could have made it to a 50th anniversary, though 42 years is nothing to sneeze at. I now watch DAYS OF OUR LIVES because I miss AMC and I need a soap fix. I’m a fairly new viewer, less than a year but DAYS is a good show. I do get tired of every character getting shot in that Fake leaf Park and I think they could use some new sets (does everyone have coffee in Brady’s Pub all the time?) but aside from that it’s a good show.

I found a friend in you, Troy. I enjoyed many soaps through the years but never DAYS… until I lost ATWT, AMC and OLTL. DAYS filled the void and though late to Salem, I am glad I can be there nearly every day to watch the goings on… although I still cannot keep everyone’s lineage straight! 🙂

I understand! I was thinking yesterday, when Kayla told Theresa in the Hospital that she and Brady “would have to wait an hour” for the pregnancy test result, she suggested that they “go to the Pub for Coffee”. Really? Doesn’t the Hospital like maybe have a Cafeteria where they could have had coffee? Everyone winds up in that Pub sooner or later, be it breakfast lunch or dinner. Honestly, the actors are quite competent but brother they need some diversification regarding Sets. Over at ABC-TV on All My Children, it seemed to me they had outdoor sets, location shots, and… Read more »

Sure wish I could be there to see this, what an honor..Congrats to everyone involved with the show for the past 49 years!!!

Congratulations to “Days” and I am proud to supporting their shows. It was awesome and remembrance of years ago. Thanks

Congratulations to Ken Corday and the Days cast and crew for making it to the Golden Anniversary! Quite an accomplishment especially during the difficult times for the genre!

I agree with Greg Meng, “What better way to start the countdown to Days of Our Lives’ 50th anniversary on NBC than to be part of the iconic Hollywood Christmas Parade?…” Congratulations, Days. I always look forward to the Hollywood Christmas Parade and Days participation in it. This year’s parade will be extra special. Wish all in Salem a wonderful 50th year and MUCH FUN at the parade!

By the way, thank-you Michael for providing this information about Days’ special honor at the Hollywood Christmas Parade. I made an inquiry (earlier today I think) about Days’ participation in this year’s festivities. So this article was right on time for me.

I really do appreciate how you keep fans informed about what is going on with our favorite soaps. Thanks for your diligent hard work!

Congratulations I have not watched in over a decade but very happy Days is still on the air!

Congrats to all of the Days of Our LIves cast and crew. I sure wish I could attend, Everyone deserves a great big applause. Loyal fan.

“Thank You” for one of the best write-ups of DAYS , I’ve seen on here

I celebrate this show with

Love it. I can’t wait to see it, I have been watching dool since I was in diapers. Didn’t quite know what was going on but I watched it grew up on it. And to this day can’t stop watching it. I hope they never take it off. Happy 50th anniversary

I wish all the kids would be in the parade. I hope it is televised in NY like the Rosebowl is. Or youtube!

Thanks for the info! Knowing this, I’ll make a point to watch.

Great way to kick off the anniversary celebration. Congratulations DOOL! Here’s to 50 more!

“Days of Our Lives is an incredible success story and has been such an influential show to audiences over the years. It is, and continues to be, the cornerstone of NBC daytime programming. ”

I hang on these words… with baited breath…. THAT, “Days of OUR Lives” remain… the CORNERSTONE of NBC

Keep this show of SHOWS

How exciting for the cast and crew of DAYS. Congratulations!!

Now i’m going to have to convince someone to go with me because these people CAMP OUT just in hopes of being seen when all I want to do is see…but you know what…I have friends who rush to Emmy and Oscar red carpets where it’s just not worth the headache..but ok…I thinks me might do this one for once. The best thing about living in Los Angeles isn’t looking for your favorites…it’s just running into them ALL OVER the place…but this is something I do want to see…

Who is Christopher Sean (Paul)???

Christopher Sean plays the baseball player named Paul. Paul is Dr. Dan’s patient who is flirting with all the girls. He looks to be part Asian. He first was seen on Friday’s episode.

He’ll most likely turn out to be gay because the flirting is overkill to throw the viewers off.

I think its wonderful.i have been watching dool since i was about. 10 years old. I can tell you who Hopes mother was(Addie)Dougs first wife,grandma,grandpa Hortons oldest daughter. Wish you could bring back some of the older players Loosing Alison Sweeney was a tragic..!! just thinking back.

Yeh! DOOL is my favorite soap.