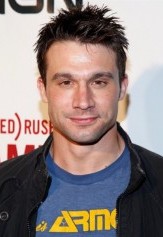 According to TV Guide’s preview of Nikita’s new season,  “Like her mentor Nikita, Alex has also found love in the same line of work. Agent Sean Pierce (Dillon Casey) is as goofy as he is dedicated, but their romance is still relatively new. “It’s going to be like Alex has never loved before,” Fonseca said. “Sean really represents stability and a normalcy, as normal as these guys can be. They both share a love for their family. There’s something so beautiful about them and their love. I just don’t know if it’s really realistic for Alex. He’s going to want to get her away from this whole lifestyle of Division.” Silverstein added: “Nikita’s fight is something that Alex believes in. I think she needs to believe that because she’s got a lot of repressed stuff from her backstory that she hasn’t dealt with.”   So will there be love in bloom for the couple to be known as Salex?

Meanwhile, Dillon spoke to the Canada’s leaderpost.com about what to expect in the new season and his journey on to the series.  As many know, Casey is Canadian and Nikita is shot in Toronto!  “It’s one of those ruthless shows where you could die in any episode,”  Dillon revealed. “So far, it’s the longest job I’ve ever had. I’ve learned so much, and I know it will help me moving forward. I got cast out of Toronto.  Two days later, I’m handed this Beretta, this gun. I tell the guy: ‘I’m Canadian — I have no idea how to use a gun.’  Within two minutes, the director yells ‘Action!’ and I jump out of the SUV and start shooting at Maggie Q — who I haven’t even met yet.  Afterwards I’m like: ‘Hey, nice to meet you, I’m Dillon, I’m the new guy on the show.'”

So will you be checking out season three of Nikita?   Let us know!

Richard Steinmetz OUT at General Hospital!

I don’t watch this show but I have heard that it is one of CW’s strongest shows and I have always loved Dillon Casey!

I love Nikita, It’s an awesome show and Dillion is really great one it.