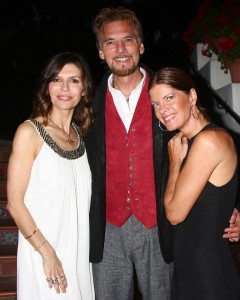 Daytime Emmy winner, Finola Hughes (Anna) of General Hospital is quickly becoming quite the film director!  Her new film, The Bet,  “a multi-generational tale about the sweet, sad, landmine-filled quest for romance” (TheBetMovie.com),  had it’s premiere last night at the Bacara Resort in Santa Barbara, a city critical to the film!

The premiere event was hosted by singer/songwriter Kenny Loggins and Michelle Stafford of Y&R!  The Bet, features an entire cast and crew of first-timers produced by the new Community Film Studio Santa Barbara (CFSSB), the world’s first and only non-profit, all-volunteer, community movie studio.

And in a new interview with TV Guide Magazine’s, Michael Logan, Finola spoke about her new film project and how she was able to fund The Bet, relating,  “It’s amazing what you can beg and borrow. We went out to the community and said, ‘Can you help us? Who knows a carpenter to help us build sets?’ And suddenly five carpenters came out of the woodwork! And it just went on and on like that. It was pretty magical, really. Even in the planning stages, people were so helpful. My friend Susan Flannery (Stephanie, The Bold and the Beautiful), who has done a lot of directing, is very knowledgeable about cameras, so she helped me out a lot. And Kimberly McCullough (Robin, General Hospital)is directing now, too. (Laughs) My daughter! She showed me how to set up shots and how to storyboard my ideas so I could explain exactly what I wanted to my first-time cinematographer.”

However, Finola’s directing debut begged the question, does she eventually want to direct episodes of General Hospital?  Hughes stated,  “I would love to. I haven’t approached [exec producer] Frank Valentini yet. I want him to see the film. I’ll tell you one thing: I have a newfound appreciation for the directors at GH. On The Bet we’d shoot maybe six pages a day. On a long day at GH, we shoot 120! It’s crazy!”

What do you think of Finola’s new film project?  Would you like to see her direct episodes of General Hospital?  Let us know!

Sure… but not at the expense of having her on our screens!!! She is a very talented lady and I hope she gets the chance!